Original Italian text here
Head on. We are men, parbleu, not slaves! Hopeless hunched over mobile’s display, having a lateral view’s skill reduced to an octogenarian  mole’s and instinctive reflexes just equal to our index finger’s contraction, we still have a chance to get rid of our chains: running to Mons as soon as possible.

"On January the 24th, our dynamic Belgian city will officially open the celebrations as European Capital of Culture 2015 - discloses Silvia Lenzi, director of the Office for the Belgian tourism in Wallonia and Brussels in Italy - and on the streets more than 18 thousand mirror balls will be turn on, together with thousands of candles, as well as countless fluorescent robots: the light of  genius and creativity is indeed Mons’ year leitmotif.

More than 5,000 artists and 400 organizations will organize 300 events at least and each of them is ready to point the spotlight on the creative festival Mons Superstar or the equally experimental fab-lab Café Europa. However, Hainaut’s capital overflows to the point of genius and culture that just even one of its treasures can remind Europeans who they really are".
official program

It should just looking up there, where the park Château Comtal climbs and a huge "coffee pot" serves hot truths, but very easy to go up in smoke. Because the ungenerous name for the civic tower of Mons, saddled on Victor Hugo’s ironic instigation, perhaps reveals the shape, but it doesn’t capture the essence at all.

The "énorme cafetiere flanquée au-dessous du ventre de quatre théières moins grosses" is, and first of all remains, a cornerstone of our civic consciousness. In a word, a belfry: an extraordinary stairway to heaven that, in the eyes of the ancient Walloon and Flemish cartographers, testifies to "the spread of katascopos’ exercise: the view from above, exerted on the globe, that leads to a relativism of values and of human achievements, but also to the adoption of an intellectual perspective, a spiritual gaze that reveals the beauty and order of the world beyond the glitter of appearances and limits of human knowledge". 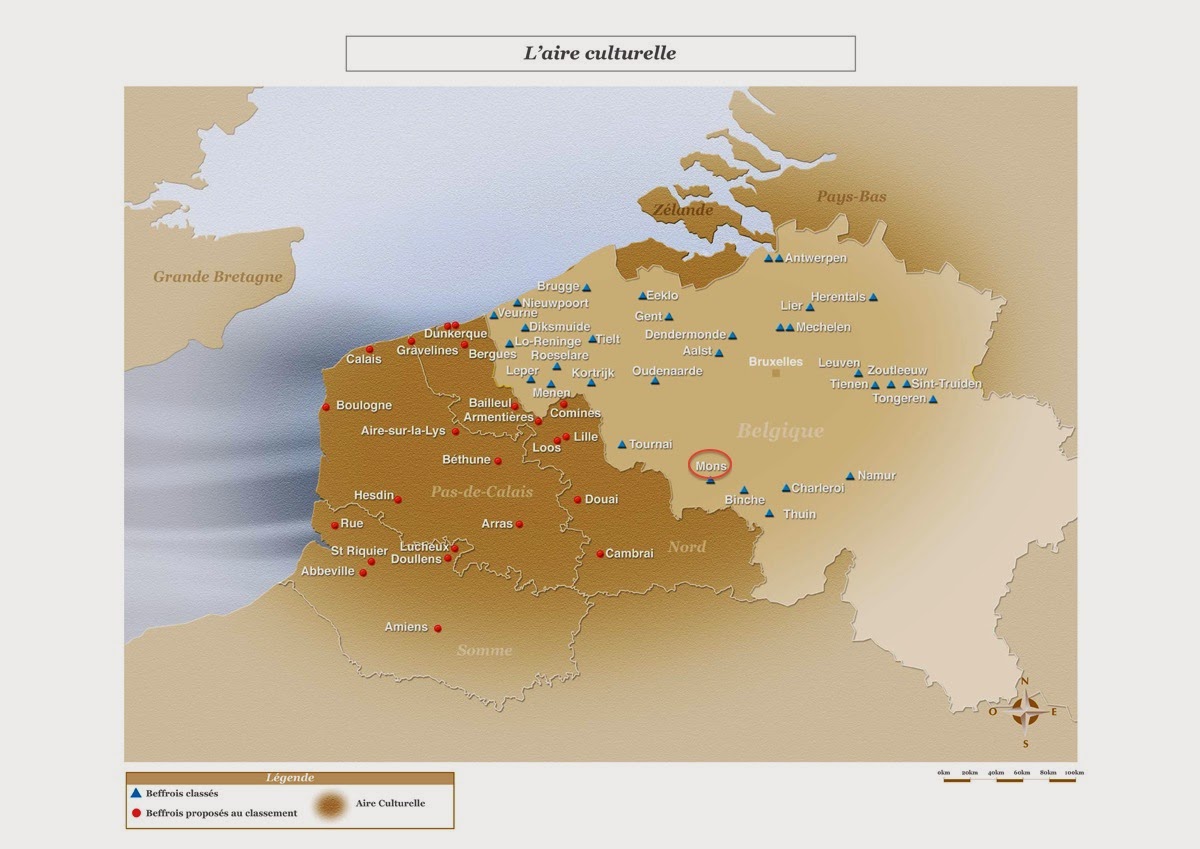 This is definitely one of the reasons that, in 1999, prompted UNESCO to include 32 civic towers of Wallonie and Flanders in the list of World Heritage, then replenished in 2005 by other 23 examples soaring in northern France. The whole area between Amiens and Middelburg, in Netherlands’ Zealand, preserves almost intact the proud bastions of modern democracy, slowly awaken in medieval Europe of Commons but, from that moment on, able to withstand the absolutist pretensions of churches, kings or emperors. And, hopefully, also of those European governments that now try to charge us with annoying labels or, worse yet, to attribute to others their appalling faults. Among the most emblematic examples, it could not miss the belfry of Mons:  the only Baroque one in the whole Belgian territory. Capped by an unusual paunchy roof - pompous attempt to patch the collapse of the venerable structure bearing the civic clock – Mons’ tower is indeed the soul and the pivot of the city. Counting 365 steps, which run within a structure composed by the incredible number of 459mila Bray’s sandstone and blue stone bricks, it’s been the point of reference for anyone who wants to get around the city since 1278: from its 87 meters it peeps any suspicious movement and, if anyone lingered on fragrant Ratons de Car d’Or or vanilla-scented Macarons,  would soon scrubbed from the silvery emphasis of 49 bells mounted inside.

In defiance of the local saying "C'est comme la Tour Saint-Waudru, on n'en will jamais le bout", the works for the construction of the new tower museum are now in the pipeline and, despite not having reached 190 meters yet (as they aimed at the time of Mons’ patron), however, have given rise to the next big thing.

"Belfry’s reopening returns to the city not only a space for deepening and enhancing their own story - explains Amalia Brancart, communications manager for the Belgian Office of Tourism Wallonia - Brussels in Italy, as well as author of a study on the revitalization of the belfry tour - but sheds light on why the civic towers of Belgium, like those of France and the Netherlands, are now so fundamental for our rights. Standing out from the beginning by lords’ or army’s bastions, but especially introducing a city life’s scan apart from church’s one, the belfry reminds each of us that we are born, we live and we will always be a community of equals".

From the shop boy to the upright judge in the court, each one finds its raison d'être within the four walls that invariably overlook every free community and whose interior spaces, today, finally begin to be visited.

Right there, year by year, have been housed the keys of the city, the treasures of the city, the cells for the criminals, halls for supreme meetings, chimes able of taming folklore’s monsters, but for the Europe that keeps on pushing the boundaries and, instead of its citizens’ good, often puts petty economic interests ahead, those stone giants have come to represent, paradoxically, the stubborn "provincialism" of the Other: whatever visitor passed by, Charles V ’s troops, Louis XIV’s or Reich’s Army, the belfry has always awakened an appetite for easy loot.

Yet, if their doors had been left open and the flights of stairs ran up to the top, well other reward would hand them out: like every free city, from there, discovers to be a confused development of two perpendicular axes crossing exactly where the belfry is, so the world of Christians, Muslims, Jacobins or octogenarians moles, appears what it really is.

To avoid political or religious reprisals, Renaissance’s genius devised a technique of globe representation whose value, today, seems more relevant than ever: as masterfully suggested by the French cartographer Oronce Finé in 1531 and, shortly after, by his Flemish fellow Mercator,  using an azimuthal projection allowed to show the Earth without privileging a kingdom’s perspective, rather than an empire’s one; yet their choice did not turn out as innocent as claimed to be. It concealed the secret of a philosophy that the authority, of any kind it is, has never been stopping to look at with suspicion: to lift our eyes, to open a point of view, starting from a top polar point, ended up transforming the terrestrial globe into a curious "heart-shaped" projection. Metaphor, for Luther’s followers, evoking the idea of an inner emotional life as principle by which to shape the physical world.

No coincidence that the poet John Donne  in his "The Good-Morrow", tried to show how the deepest knowledge of the world rises just from a game of glances between two lovers:

“Let sea-discoverers to new worlds have gone/Let maps to other, worlds on worlds have shown/Let us possess one world, each hath one, and is one/My face in thine eye, thine in mine appears/And true plain hearts do in the faces rest;/Where can we find two better hemispheres/Without sharp north, without declining west?”.

The attempt to transform the Catholic symbolism of the heart in a doctrinaire principle closer to the Stoic sensitivity than to the Christian one, urging the man to roam the world through his own eyes, was destined to be a dangerous act of insubordination to authority; because a world heart-shaped, which asks us to be looked at as we look at our own heart, so is an act of devotion, but also a form of inner withdrawal out of control, a bold step towards self-consciousness and awareness. And if mortals may try to interpret their hearts, it must be very clear that only God - or whoever it takes its place - is "kardiognostes" (knower of the heart): able to see the heart without any help. Almost like a huge webcam embedded in the sky. Looking up at the tip of the belfry, as well as rising on its summit, proved, and still proves, an unbelievable revolutionary act; yesterday an intolerable sin of hubris, replacing man to God in contemplation; today a disturbing act of liberation from a perspective within which the other constantly tries to limit ourselves.

Perhaps it is also for this reason that the belfry, traditionally, is chosen to stage battles, superstitious rituals or collective ceremonies which call into question the often acquired roles: in Mons, fortunately, you do not run the risk of being struck down by shocked cats on your head, as it happens in Ypres'  carnival (today peluches only, ça va!), or smelling herrings, as instead in Dunkerque:  at most you are eaten by Lumeçon, the huge dragon that every 57 days after Easter returns to challenge St. George during the festival of Doudou (around May the 31st this year).

As the Grand Place is transformed into a true battlefield and, simultaneously, a stage for St. Waltrude relics’ exposition, belfry’s area remains the heart of the city. Also because the last is just 200 meters far from the first: it’s from the Gothic collegiate dedicated to the saint - one of the best examples of Gothic Brabant style standing out beside the tower - which starts the procession of the Car d’Or, a golden carriage otherwise placed between the soaring nave of the church. And it’s still the belfry to mark, through its flawless bells, the various stages of the ceremony, when the daring thrust of the carriage along the flight of Saint-Waudru (Waltrude’s husband ready to punish his fellow citizens with a year of bad luck, if his ancient companion’s remains do not come to him in one tug), is followed by the assault on Dragon tail’s hairs as mascot.

Nothing escapes the eye of the tower, so sharp and penetrating that it had made the first settlement city for the Belgian Freemasonry, whose panoptic triangle has been carved since 1721 in the Lodge of Perfect Union and at the number 3 of Leopold the First’s street boasts its modern headquarter of emancipation. Not surprisingly, in Mons, taught Marie Popelin,  companion of the first feminist capable of challenging the Catholic Church in Belgium and impart secular education to the fair sex: the Italo-Belgian Isabelle Gatti de Gamond. Neither wonder if, just a monsoise girl of Italian descent - Marny Di Pietrantonio – today has been appointed by Abbateggio's mayor (Abruzzo region) to coordinate the representatives of the wide Italian community through the project “Emigrants”. An ethnic component particularly vital and politically very busy, as evidence Mons mayor’s career, as well as Wallonia’s president, Elio di Rupo.


And it is certainly the tip of the belfry that Van Gogh looked at, when between 1879 and 1880 he served as evangelical pastor in the nearby Borinage, while he was saving intoxicated miners’ lives: the same suffering faces and bodies that are alive in his well-kept drawings at the maison cuesmoise today, but some English soldier swears he recognized among the ghosts coming to aid His Majesty’s army during the bloody battle of Mons, in the First World War. Vincent knows it: those dim lights, into the deep blue of the loneliness, were but a grateful sigh to wonderfully starry starry nights.