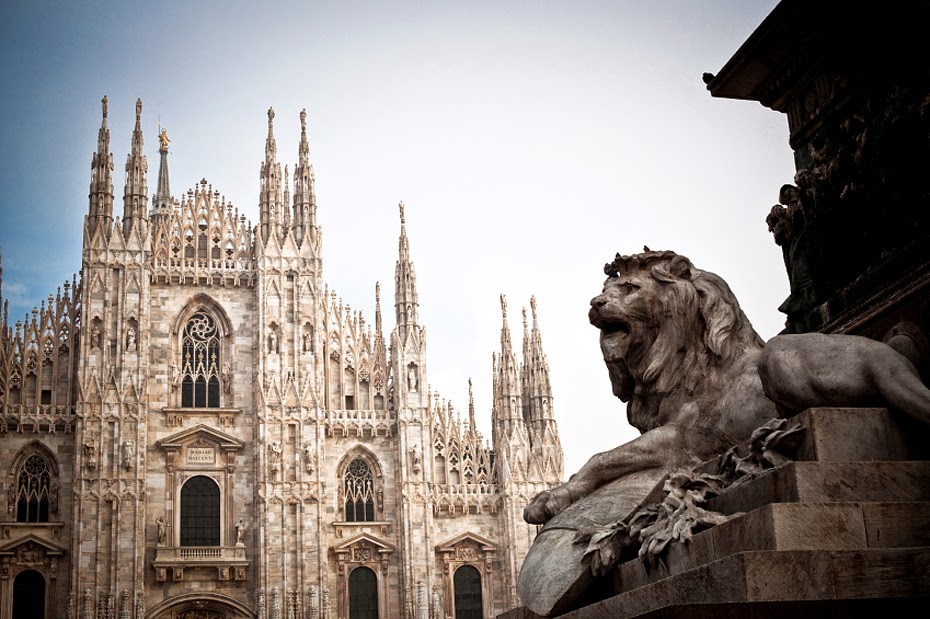 Original Italian Text here
Expo has already satisfied many bellies, but much less souls. At about three months before the opening of the most important international event Milan will host in 2015, Foundation Brothers of St. Francis of Assisi and Academia-Ikon Rus’ have redefined its sense, finally burying the controversy about management scandals.

"Feeding the planet" means not only to respond to the need of ensuring food for all those who, even today, can’t get enough to survive, but also to look at the hunger as a stimulus to transcend our limits. Through the creation of a sacred path between Russian icons and Lombard images of Nursing Madonna, ready to lead from the works on display at the Urban Center in Milan (until February 1st) to the extraordinary frescos scattered throughout the region, Expo has finally revealed itself as an historic opportunity to understand the value of nutrition as desire, even as need.

"While the food provides physical workout - said Ada Lucia De Cesaris, deputy mayor of Milan – on the other side, like work, brings also and above all moral dignity. This combination, too often focused on material emergency only, shines best in our city, thanks to the work of the Foundation Brothers of St. Francis of Assisi: first example of the extraordinary volunteer network that helps, not infrequently even replacing, Italian institutions". Through the 70 thousand tons of food reaching nearly 2 million people (about 6 on that in Italy still hungry, according to Banco Alimentare' s estimates), it’s possible to present something even more valuable than an hot meal, or the daily loaf of bread: because in the act of feeding, production and distribution of food, there’s a special form of beauty that can go beyond the aesthetics of the gesture, the health-conscious cookbooks or evanescent guides to the taste, of which today’s scene is saturated. 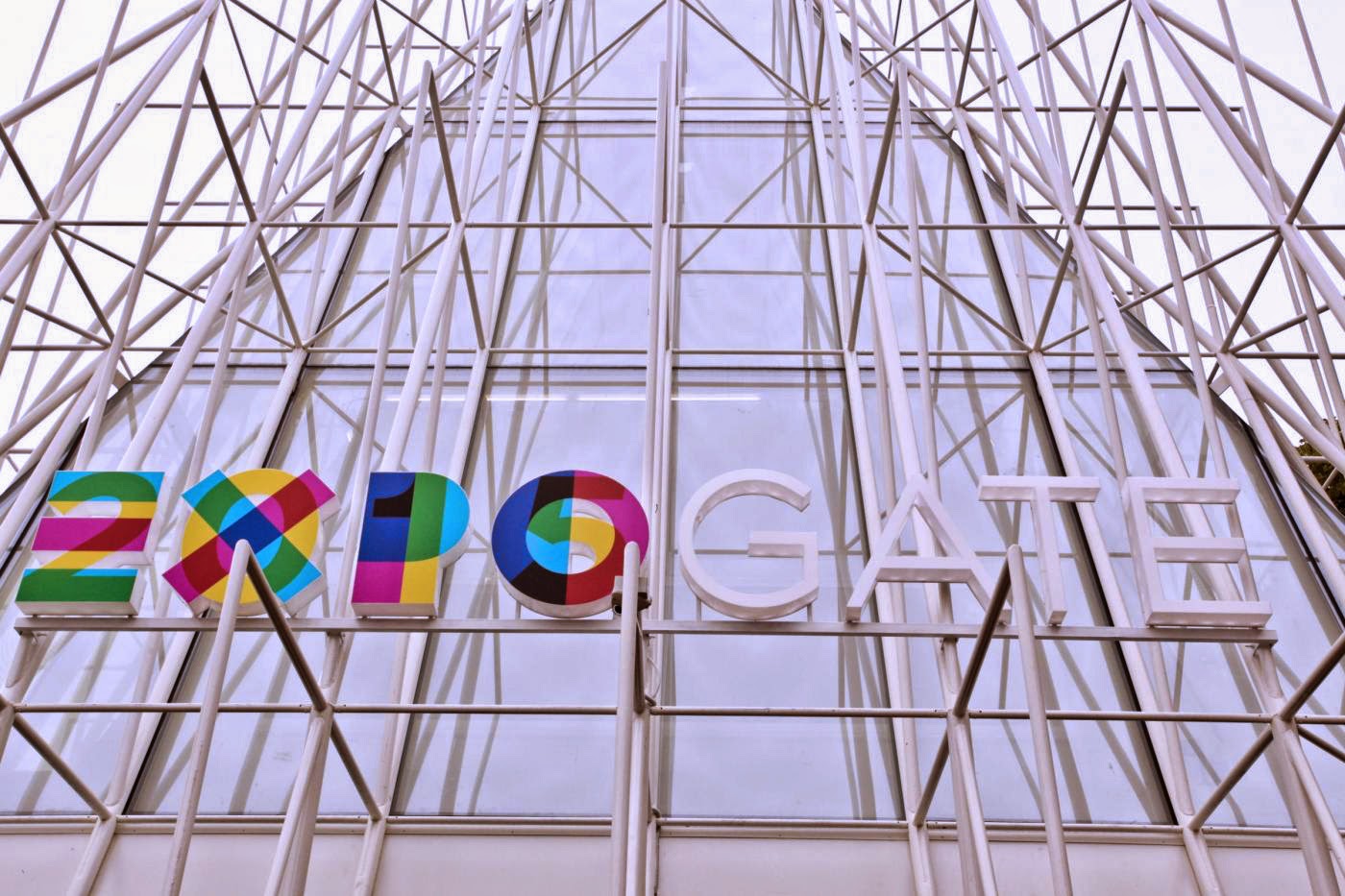 "In man’s history, at least three different ways have been revealed to penetrate the meaning of his own existence - raised Friar Cesare Azimonti, president of the Foundation Brothers of St. Francis of Assisi - that of truth, goodness and beauty, indeed. The latter is perhaps the most neglected, although it appears the closest to the contemporary sensibility: therefore it’s necessary to get closer to the mystery of iconism to access a deeper level of vision and restore the meaning of that extraordinary Dostoevsky’s phrase, for which beauty will save the world".

The first step is simple: just stand still. Stand in front of the beauty, so it is possible to contemplate and, through the patience of refound time, renew a dialogue with what has been made invisible by the excess of visibility: overwhelmed by "too much", we are unknowingly disturbed, to the point of not being able to listen anymore to our most intimate voice: because the image isn’t anything else than a vibrating sound. In the age of communication, the real luxury then becomes the silence: retreat for excellence, that no one should allow to be undermined, expropriated or denied. As suggested Don Walter Magnoni and Giovanni Boschetti, respectively in charge of the service for the Pastoral and social work of Milan’s diocese the first, an expert in Russian art and director of Academia-Ikon Rus' the second, "our society needs to re-build pathways for feeding the soul, in order to find a new foundation: what is to own the world, if you lose your own soul? The image of breastfeeding, universal and eternal because it belongs to each human being, is one of the most precious treasures of which the buildings in our area boast, though often overshadowed or even hidden".

A recommended guide for the rediscovery of this extraordinary heritage is definitely the book "Una Madonna da nascondere" (A Madonna to hide) of Natale Perego, who explored and studied for years the most emblematic examples that have been developed from Ambrogio Lorenzetti’s original representation during the fourteenth century in Siena (the Tuscan city that gave back the West one of the oldest artistic subject of humanity, eclipsed in the dark years of the Middle Ages). "The Nursing Virgin is primarily a mother - said the same Perego - and his extraordinary humanity was echoed by Leonardo da Vinci who, through his Madonna Litta, favored her spread from Sforza family’s Milan throughout surrounding territory, where his pupil Marco d'Oggiono excelled. Although not obvious, examples abound: in front of Cardinal Maria Martini’s tomb, in Milan Cathedral, is indeed a Nursing Madonna of exceptional features, but she can also be found in the Basilica of St. Lorenzo  among the exhibits of the museum Poldi Pezzoli or Brera Academy. A blooming lasted little more than two centuries, since already at the time of Counter-Reformation, with the cardinals Carlo and Federico Borromeo, this subject came to be judged unsuitable, as closer to the descriptions found in the Apocrypha".

To find other examples of sacred feeding, beyond the carved pumpkins and food images on the portals of Milan Cathedral, then you must advance to the territories of neighboring Brianza,  north of Milan, between Como and Lecco: from Sabbioncello di Merate to Galliano,  by Cantù or Erba,  Inverigo and Brivio,  until Galbiate or Agliate,  women of that time saw Nursing Madonna as the only real consolation during their troubled childbirths and subsequent loneliness they were often abandoned to".

And just in Agliate there are two Madonnas who guard the key to the most remote European spirituality: if a human Nursing Madonna stands in the presbytery of the Romanesque basilica, in the baptistery next appears a Madonna of Tenderness, whose enigmatic gaze has even been compared to that of the famous Mona Lisa by Leonardo. In the latter fresco stands a baby Jesus that gently embraces the mother, throwing her arms around his neck, while jutting up to support her cheek to his face. Virgin’s face, however, is illuminated by his son’s lavishing light, but it is "veiled with sadness": a detail often alienating, but that refers to the Gospel revelation made by Jesus to his mother, about his destiny of death and redemption. No coincidence that the same neck of the child appears bulging of "pneuma", Holy Spirit’s breath: another rarity that, according to the researcher of Gral (Archaeological research group of Lambro river basin) Leopoldo Pozzi, should place "local Madonna in the canon of Byzantine representation, although painted around the fourteenth or fifteenth century".

In Eleusa church (in greek, "Virgin of Tenderness"), which was built next to the imperial palace of Constantinople by John II Comnenus (1118-1143), is indeed what is considered the original matrix image of Agliate’s Madonna. Painted around 1130, it went though destroyed and only the gift of a copy to the Prince of Kiev, from the Byzantine Emperor, allowed the survival of a model that pushes the roots of Christianity in the mysterious ancient Sarmatia plains. In 1155, due to war reasons, the icon of Kiev was indeed transferred by Andrej Bogoljubkij to the city of Vladimir,  taking the name of Vladimirskaja, Our Lady of Vladimir), finally arriving in Moscow in 1395. "Here - Viktor Lazarev reports in "Art of russian icons" with a touch of irony - turned into a sort of supreme matron of the Russian state”.

No coincidence that even today is perfectly preserved by the prestigious gallery Tre'jakov, in the Russian capital. Professor’s subtle sarcasm is an indication of a secret that tightens Agliate and the Third Rome. While it is true that the local work seems to refer to the Byzantine canons, its eschatological purpose is actually quite different: by comparing the characteristics of Comnenian and Agliate jewels, you see faces similarly oval, but the second has a nose longer and thinner, with tiny lips that contrast comparing to immeasurably larger eyes. His ethereal candour has little in common with human shades of the original model, offering a portrayal that seems rather regressing in his mimetical capacity, as has been done almost three hundred years after the original. 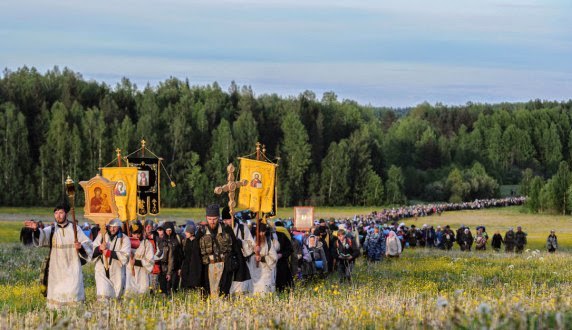 The answer certainly can not be unearthed in Brianza, nor in Constantinople, but precisely in the "Holy" Russia. While showing a formal homage to Lombard Gothic, in the local fresco "the world becomes indifferent to the experience of visions that occur in the optical material nature - notes still Lazarev - and, with an evangelical challenge, material space, heaviness, views, natural light and laws of perspective are gradually dissolved: according to Isaac the Syrian, the icon is a crystallized expression of faith".

The image of Agliate isn’t then a fresco, but something more like a fresco-shaped icon, an icon of a tradition that should have nothing in common with the world of Lombardy. To exit the paradox, we should appeal to a saint!

And there is, indeed. That St. Onuphrius standing on the wall of the baptistery, right next to Our Lady of Tenderness: if the "sad look" of this latter is sign of distance from the fleeting earthly materiality (according to the judgment of the Gospel, then made his own by dualistic-Gnostic current, that "the whole world lies in the power of the evil one", 1 Jn 5, 19), the peculiar cult associating the Madonna and St. Onuphrius can finally clarify the original matrix. 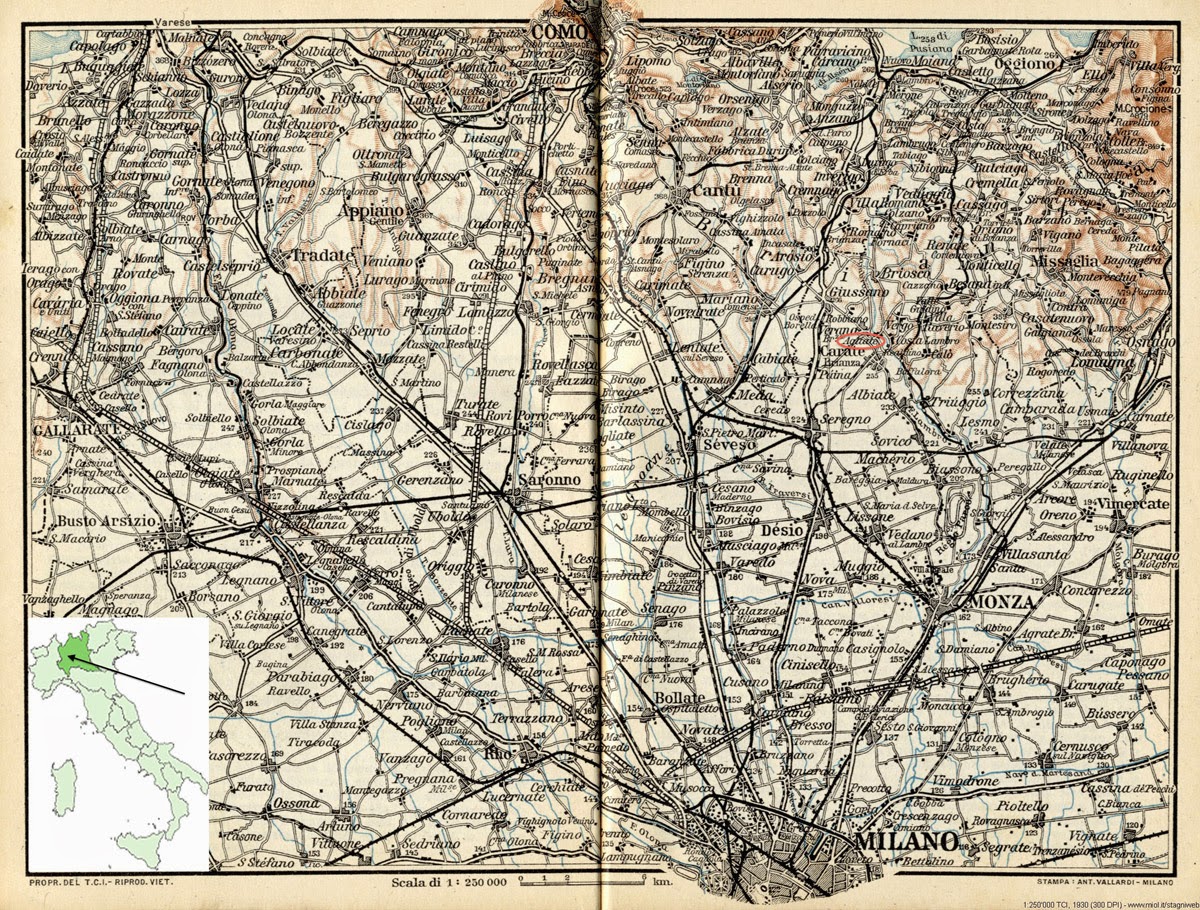 The "sadness" is indeed a figure of a metaphysical threshold between speakable and unspeakable, between what can be seen and not, what can be reached through a knowledge of another level only, called "gnosis" by the Greeks. And if Vladimirskaja assumed in Russian territory functions and meanings ascribed purely to the roots of his magic-eschatological matriarchal original society (as a Wallace Mackenzie's report shows well on a ceremony in 1871 against cholera, during which the icon was brought in procession around a village by women, whipping men who were discovered in their path while plowing a magic circle), the images of the Virgin of Tenderness and St. Onuphrius were the only two representations that Agliate’s people worshiped for miraculous purposes (especially when the plague was raging). Not surprisingly, magic-miraculous events are told about the copy of the Madonna in Milan’s San Satiro church – built perhaps by that Ansperto from Biassono who was Agliate’s basilica former head: the red dot on child's throat, here, seems to be the last remnant of the blood gushed due to the stab a later on converted glutton swung. Agliate, Milan, Istanbul and Moscow. Four ancient capitals, an unknown painter, the same secret. Expo begins from here. 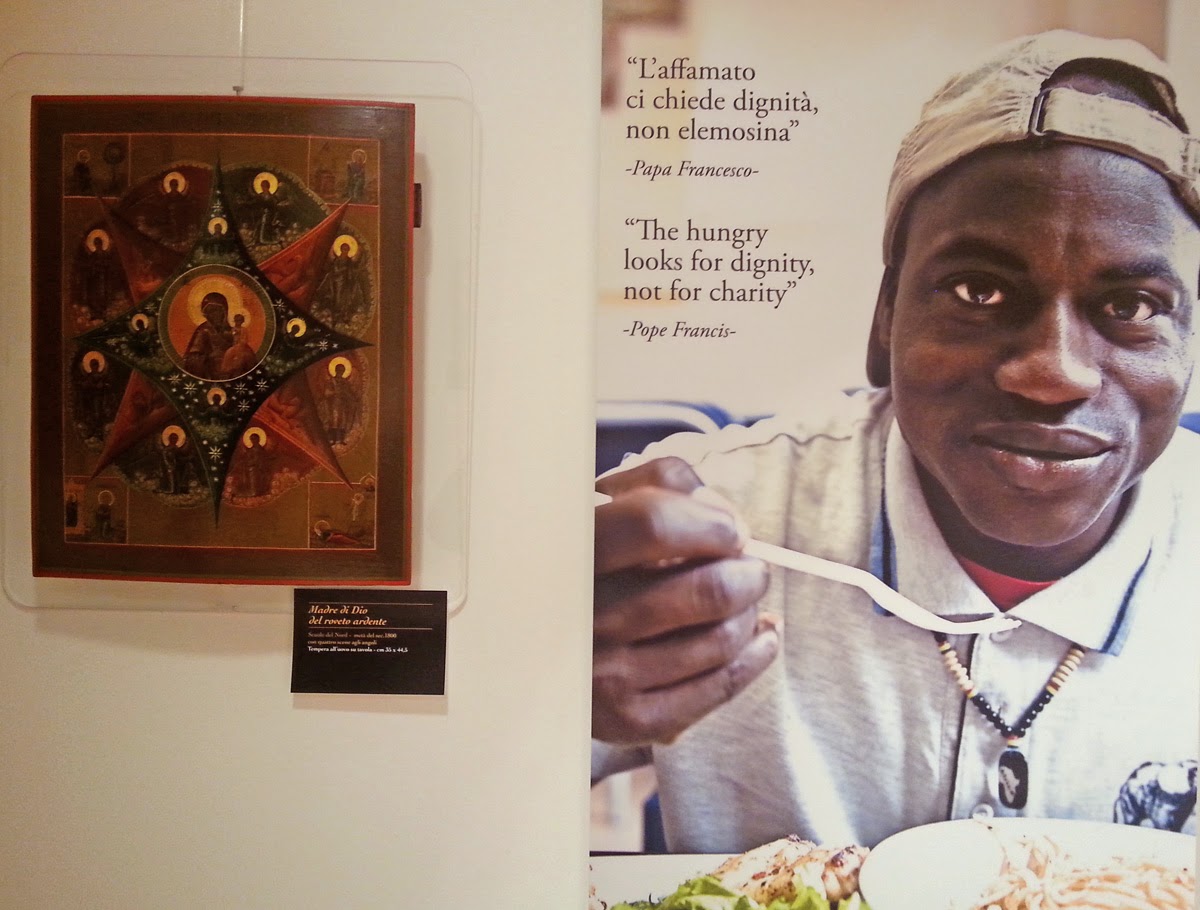