ON TERME DI SATURNIA'S LIFE, DEATH AND REBIRTH, according to Amiata's Christ 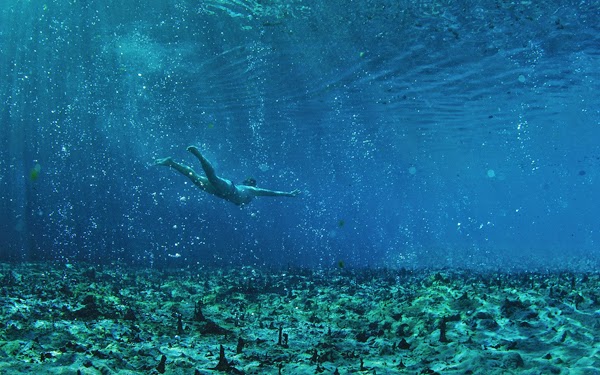 If even Saturn has been loosing patience due to man’s bellicosity, in today's world there’s really something wrong: floods, so distructive as those which hit last September and October, able to crush the jumps of the ancient thermal waterfalls Del Gorello and Del Mulino, haven’t been seen in Maremma region since the days of the mythical god of cycles and of his battles with his son Zeus. Since always, however, an equally extraordinary regenerative energy seems to direct itself to the exact point on which history’s wisdom has wanted "Terme di Saturnia Spa & Golf resort" arised. 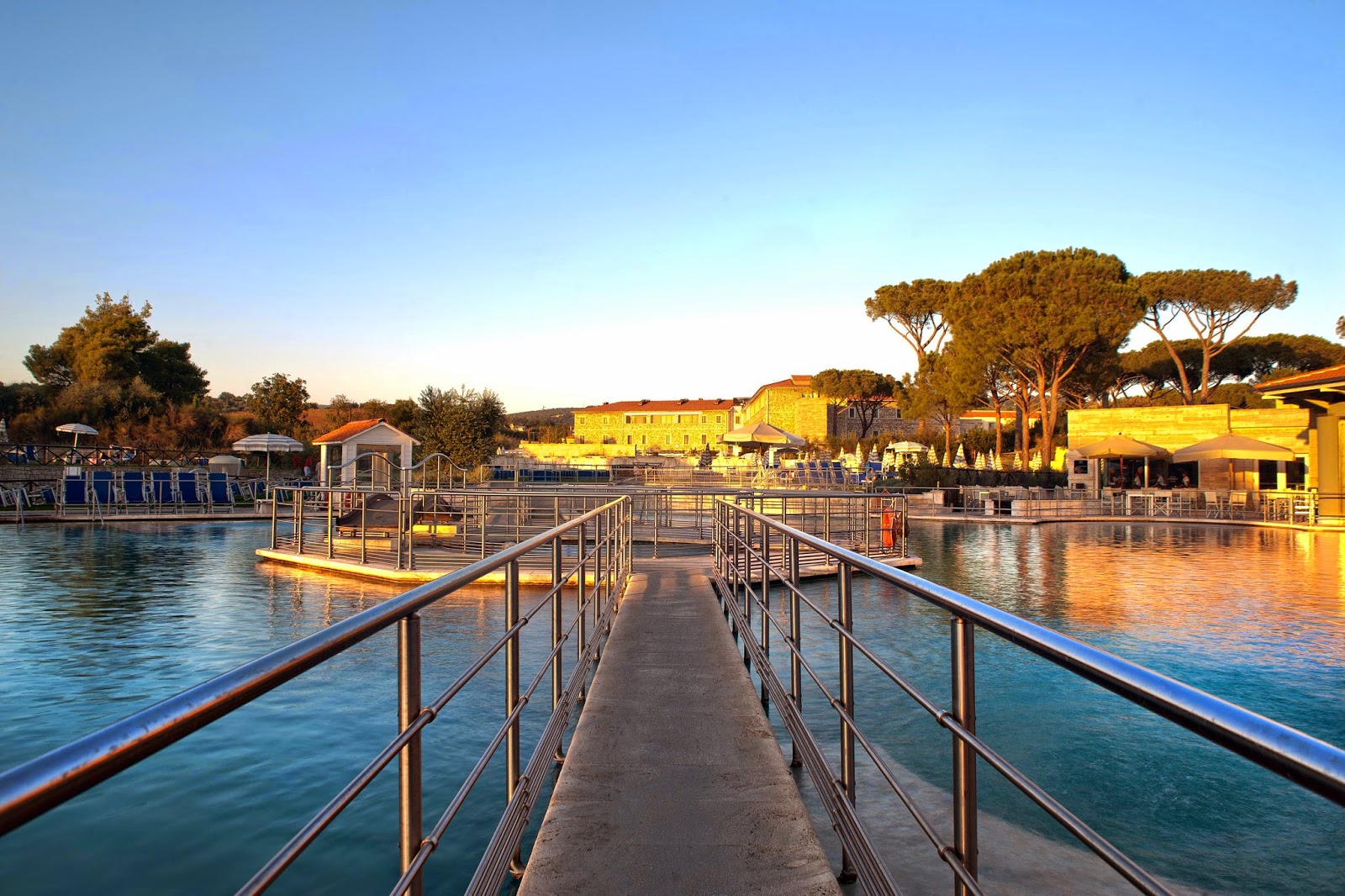 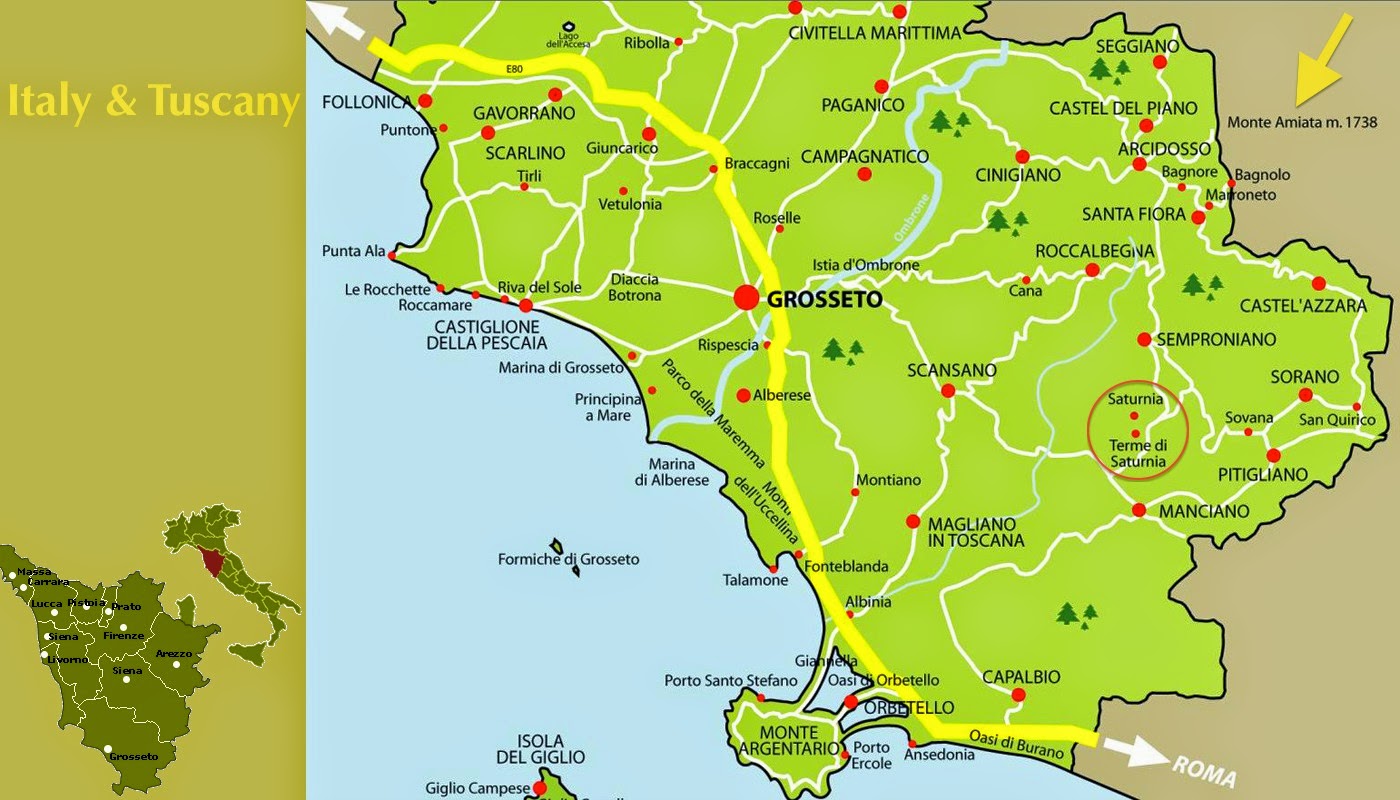 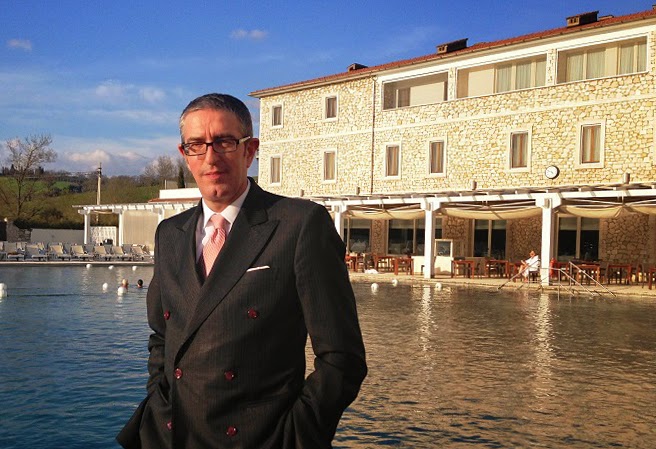 The heirs of the site where Roman soldiers used to heal themselves, returning from military campaigns along Via Clodia, are therefore inclined to read to the bottom of divine wrath’s signs: "there is no doubt that Saturn’s lightning, thrown into the crater by which flowed the therapeutic waters, involved great morphological upheavals at that time too - confirm Licinio Garavaglia and Annalisa Viglietta, respectively general manager and director of business development of the Tuscan resort - but a new golden age began soon after. Considering the demonstrations of solidarity received from residents first, but then from our own customers, for site’s reopening after two weeks only, we are convinced that history will repeat as well for its positive consequences. The launch of #WeLoveTermeDiSaturnia hashtag has made it possible to further consolidate about 2.5 million Euros allocated by the Province of Grosseto as an emergency fund for the revival of the site; the same campaign has been also supported by an initiative of solidarity called by our own resort. A euro for each reservation has been transfered to the bank account opened by the city of Manciano in favor of flood victims. 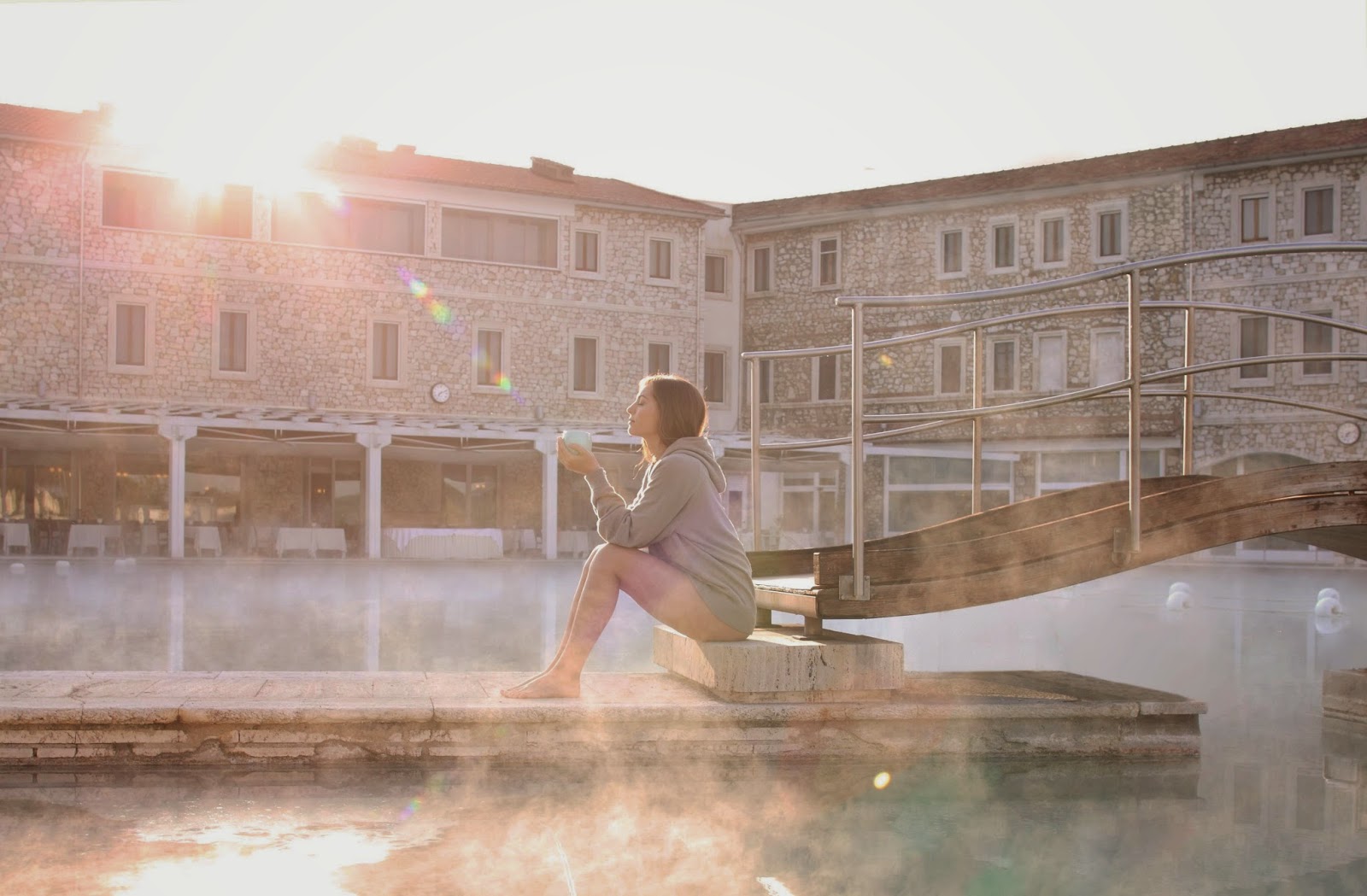 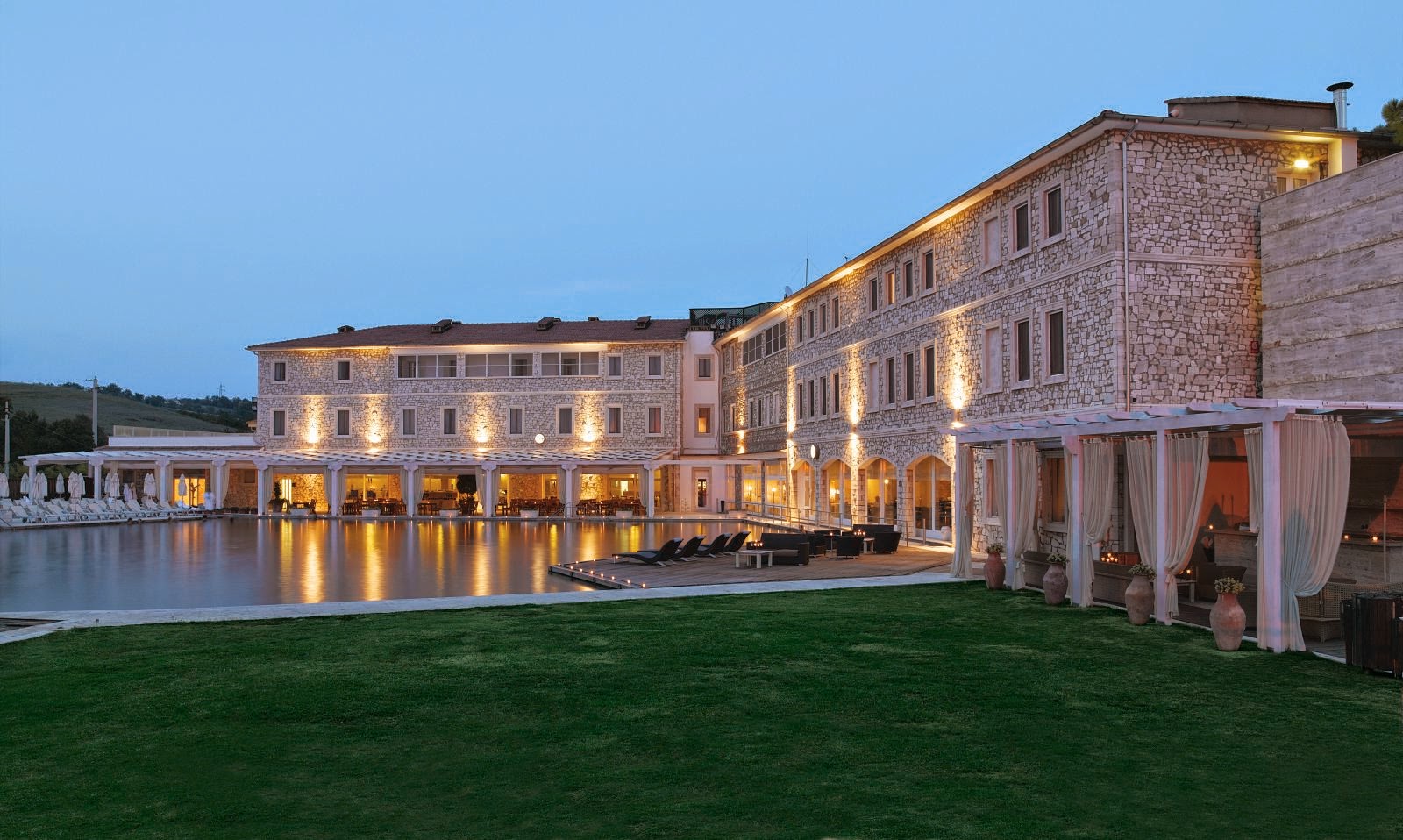 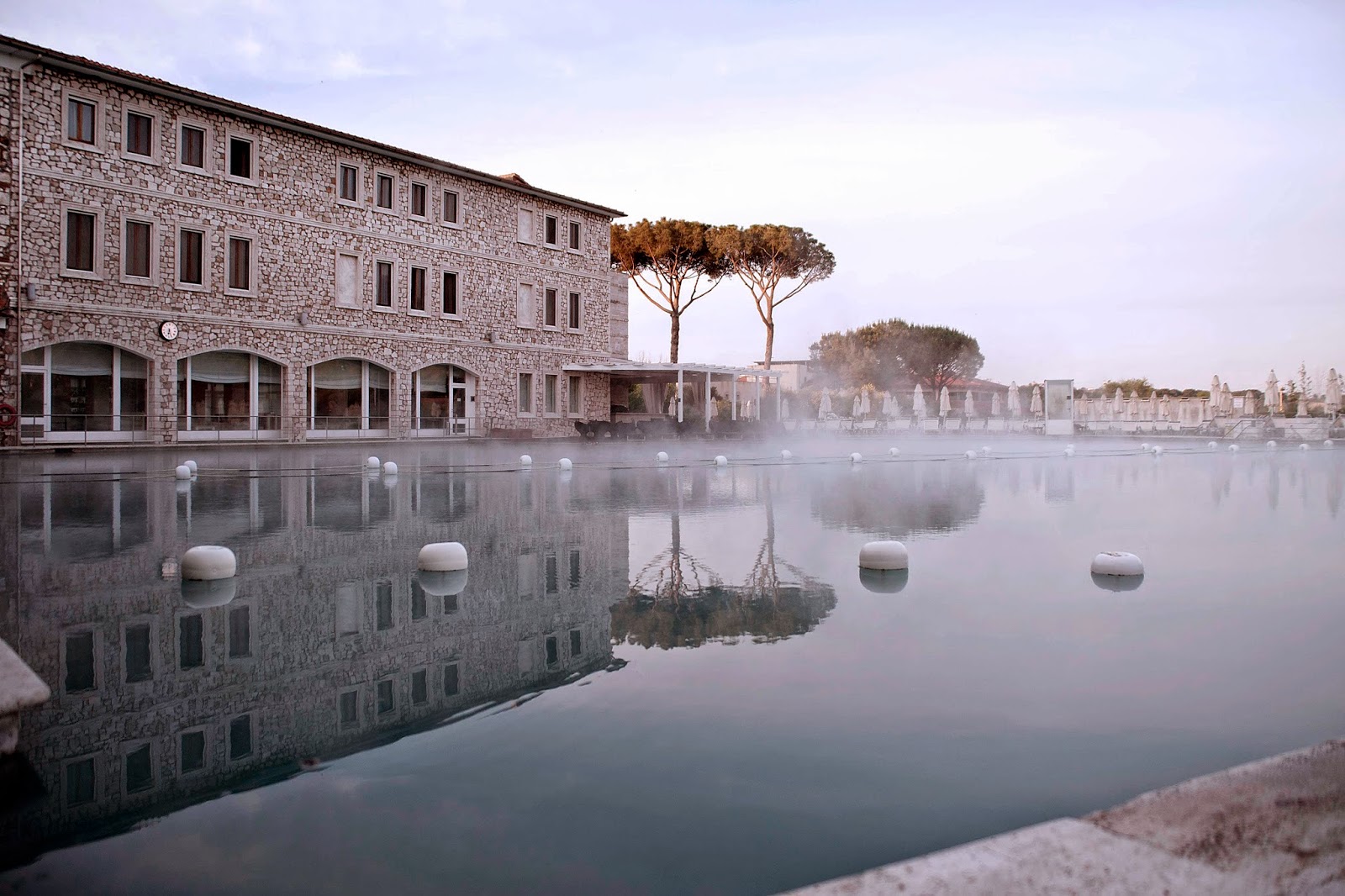 Awards bestowed by more than 22 golf clubs partners of Terme di Saturnia, as well as cocktails and Christmas markets proposed in our location, have done the rest”. The results were not long in coming: if waterfalls’ jumps have been restored and finally secured in a record time, the worrying economic downturn in November (-15%) has profited by entire full booked weekends instead, insomuch as the thermal complex has organized evening openings for both Immaculate Conception’s celebration and New Year’s eve, celebrating the milestone of 40 thousand visitors in 2014 under fireworks. 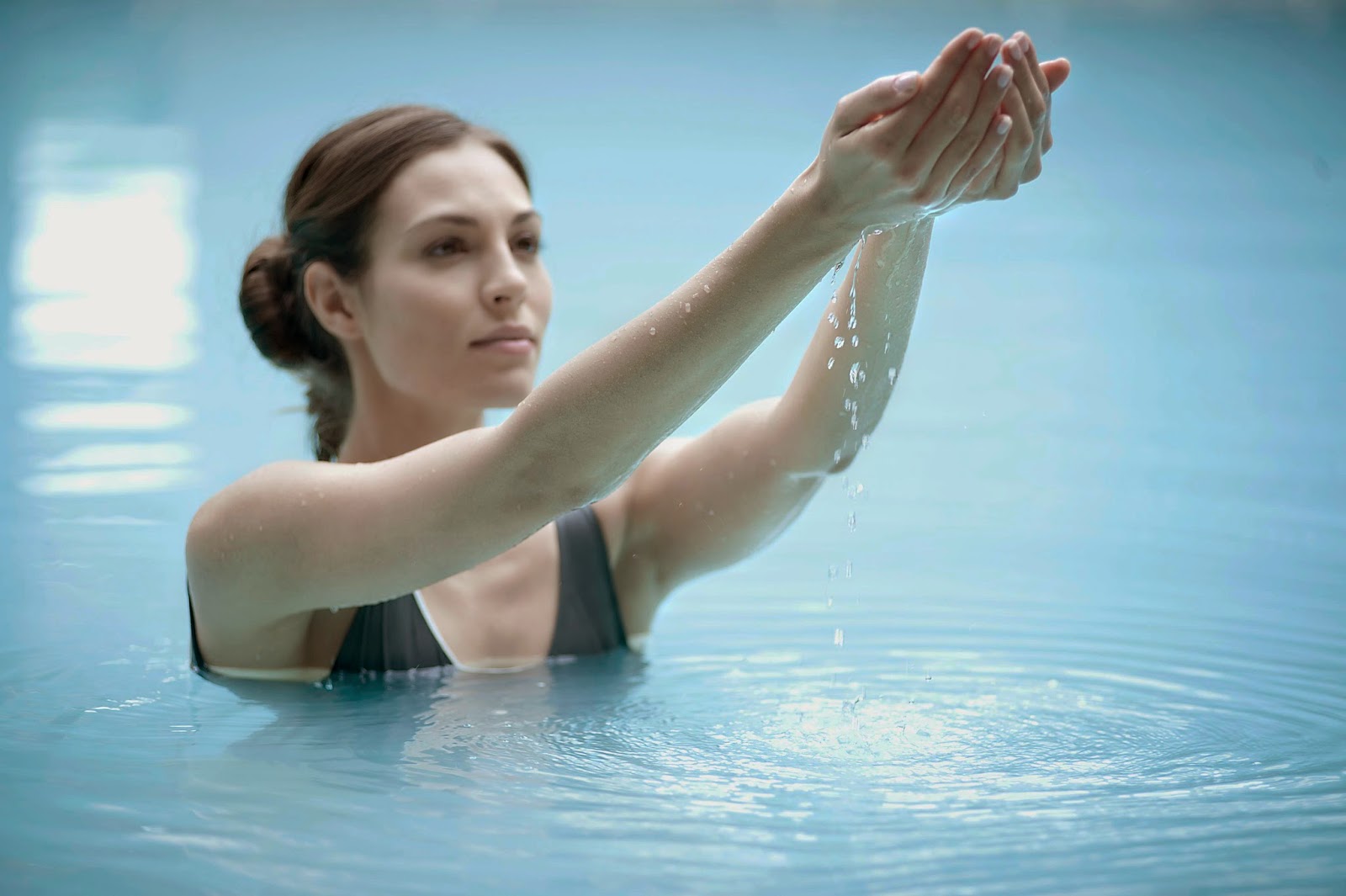 "The feedback from these initiatives encourages us to work toward deeper integration with the territory - add Garavaglia and Viglietta - and this is just the line that we intend to follow through this year, as soon as Terme di Saturnia will open the new season next February 7th: we already have surprises in store for St. Valentine’s feast. In any case, our attention to the exploitation of local resources is proven by the properties themselves of the proposed treatments. After the first water analysis in 1918, chemists confirmed that the treatments for psoriasis, as well as cardio-circulatory, respiratory and bone-muscle disorders, get here enormous benefits by virtue of a stable water temperature to 37.5 degrees (the same as that of the amniotic fluid), both for the abundance of sulfur and silicon-calcareous components in our muds (whose aging times require a full year), but also and especially for the presence of a unique alga: bioglea, whose extract is extremely rich in amino acids, sulfur, potassium and magnesium, ensuring extraordinary moisturizing and regenerative effects”. 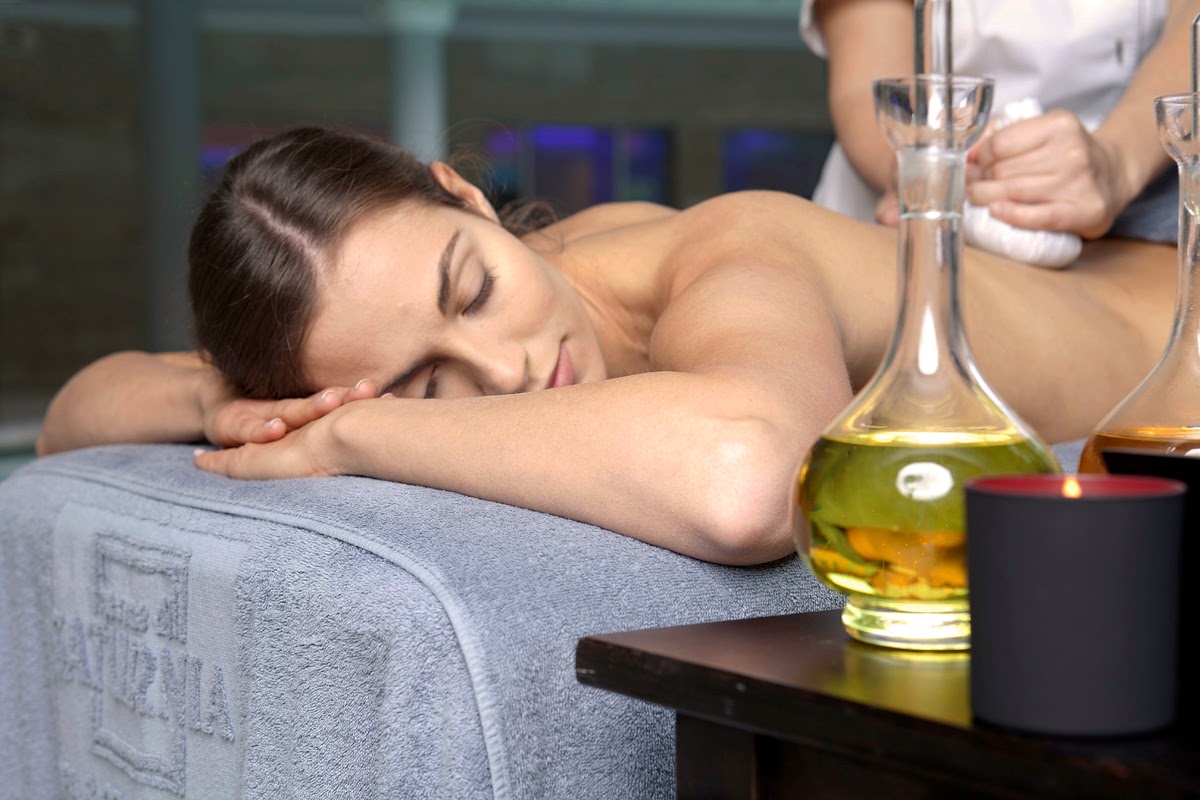 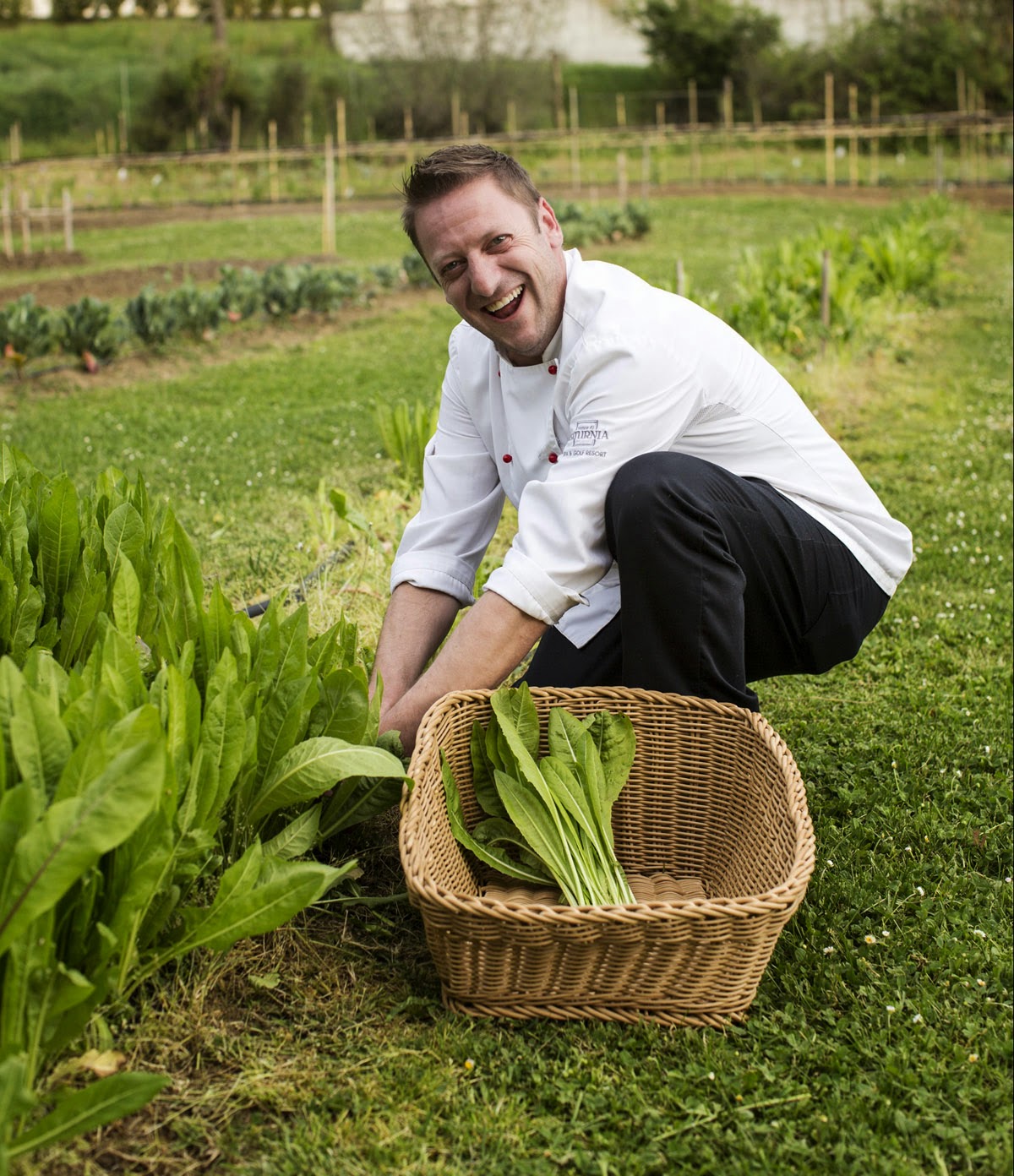 Terme di Saturnia’s cosmetic and therapeutic treatments are worldwide famous thanks to this element’s qualities, together with a concomitant "habitat philosophy". Wherever you move to the whole resort, through its four outdoor thermal pools, the Roman bath, or when you stay in one of the available 128 rooms, you meet architectural elements that enhance the properties of the surrounding area regularly. This is highlighted, for example, by the abundance of travertine for its soothing effect on the view, or by the use of black oak in the avant-garde experimentation area of Spa: "The Ultimate" (among the special treatments exploiting properties of gold, as well as amber, there are also four exclusive massages for golfer’s back). Similarly, in the two restaurants Aqualuce and Aquacotta (this latter awarded a Michelin star), are prepared “zero km” courses, directly gathered by guests in the organic garden, contributing with their hands to the fame of "buttero sautéed pici with tips of tenderloin and porcini", “Maliosa oil risotto with lemon, capers and Argentario’s shrimp carpaccio", or the unmissable “cream of Chieti figs with vanilla ice cream and tile Muscovado". 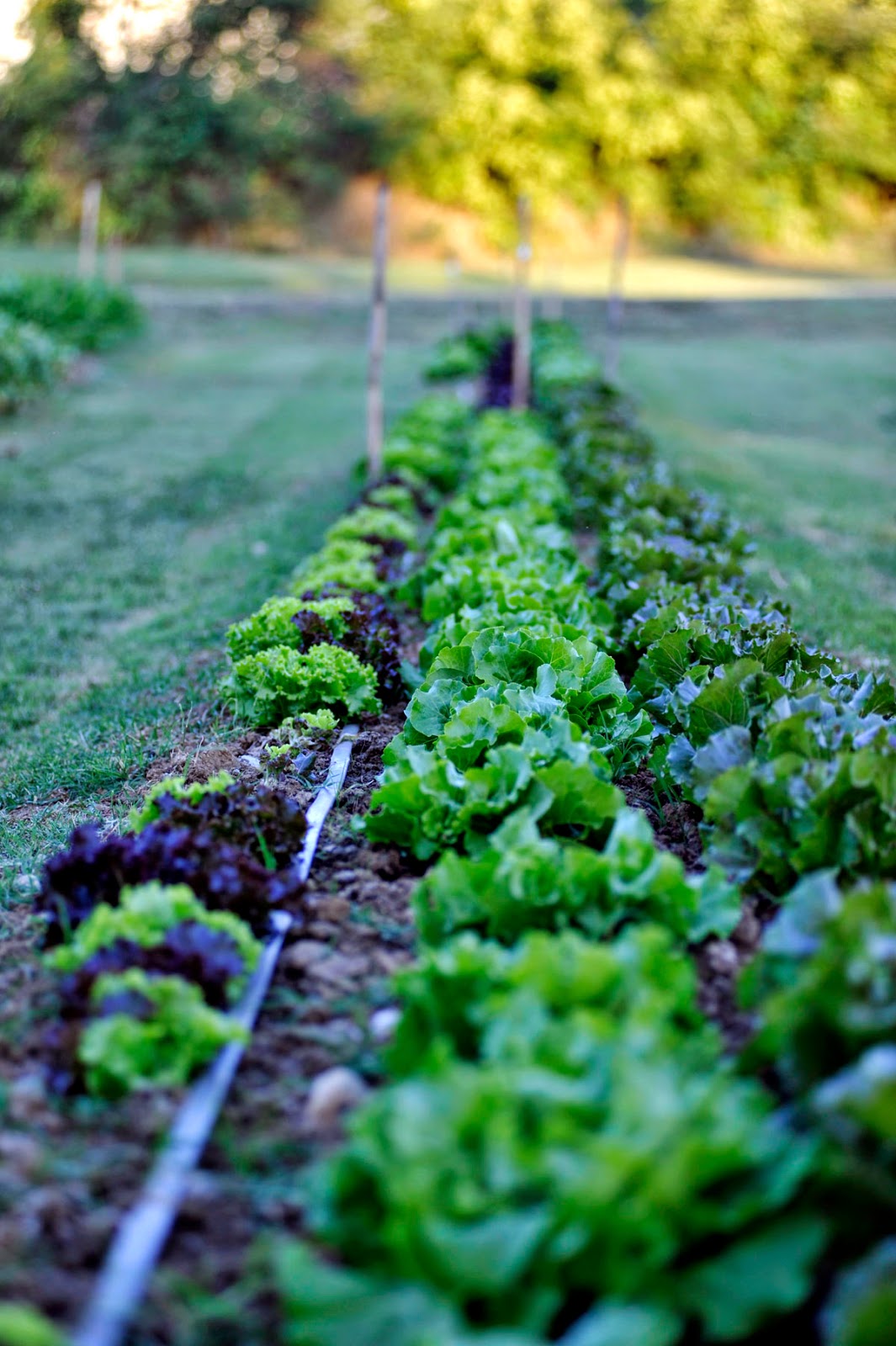 Chef Alessandro Bocci’s specialties have also allured Slow Food Maremma' s president, who is now working to enhance an alternative offer to the popular culinary traditions of Florence and Montalcino, along with nine other local farms: Maremma’s unique ecosystem allows to create customized medical and herbal recipes thanks to experts' collaboration, including neuropathologist Constance Giunti, responsible of "natural reset" classes for the most sensitive guests to food regeneration.

On the other side, as an eminent exponent of “The leading hotels of the world” brand, for the next Milan Expo Terme di Saturnia will provide same formula packages allowing to stay in Lhw hotels along the whole tourist axis Milan-Florence-Rome. Two moves which should help strengthen the foreign presence in the Tuscan resort, given that 70% of visitors are still Italian, despite many repeaters coming from Germany, Switzerland and Russia (unfortunately more and more last minute, because of political sanctions). Third strategic move, the creation of pre- and post-cruise tours starting from the nearby Civitavecchia,  where a lot of foreign tourists and golfers transit: ideal players for Terme di Saturnia's 18-hole course. 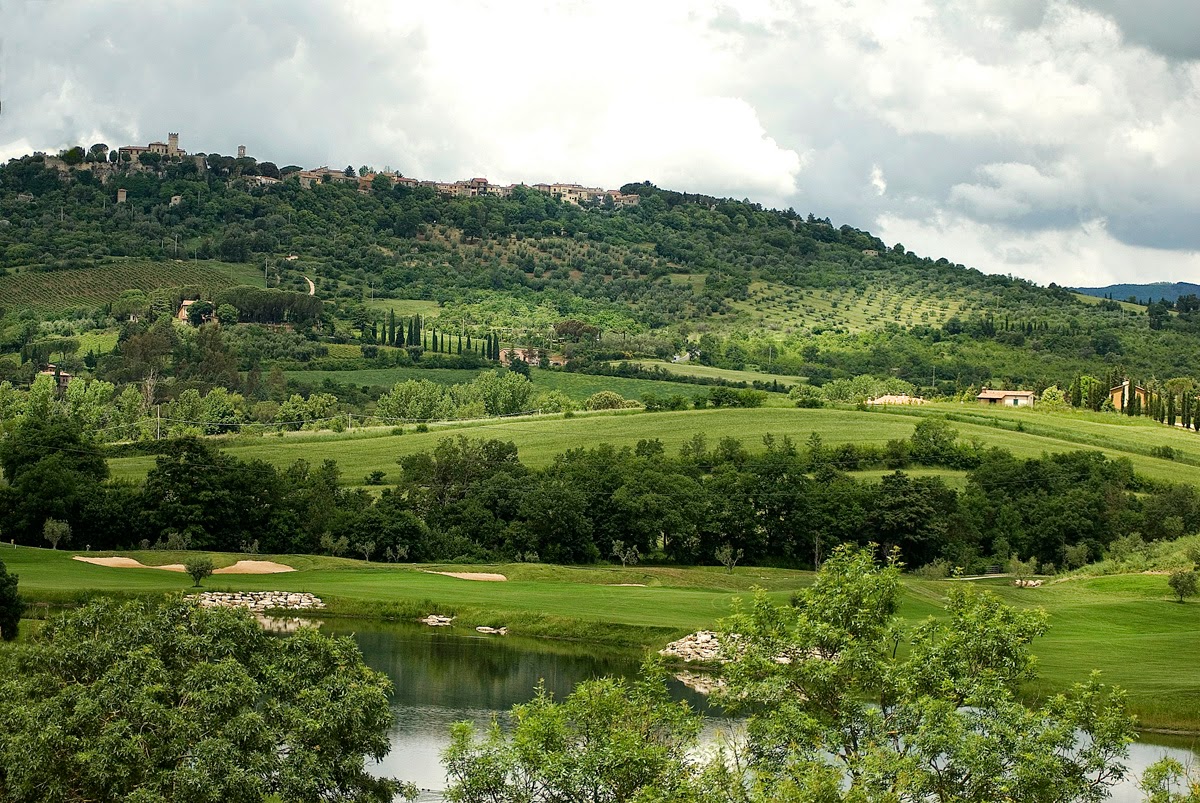 Among the 70 hectares of water hazards and bunkers, along the Gold Academy for newbies, it’s easy to recognize famous Californian architect Ronald Fream’s international imprint. His sustainable design has made the golf course “best Italian 2008”, prompting the Italian Golf Federation to release his coveted green certification  last year: now, more than ever, the circuit reveals an emblematic glimpse of wild Maremma. Among his holes it isn't uncommon to meet deers, porcupines and pheasants, enjoying perspective views on the fields in front of the medieval villages Montemerano and Poggio Murella. Indeed, Terme di Saturnia appears an ideal base to venture to southern Tuscany with comfortable day excursions, in particular towards the nearby Mount Amiata (Monte Amiata). It’s here Saturn probably took his first angry look at, not understanding why wars kept on arising among men, when similar havens existed on the Earth: from  Amiata's volcanic peak, you can overlook the whole Maremma and every path crossing the mountain leads to villages rich in history and tradition, as well as archaeological mysteries. The origin of local megalithic remains is still uncertain and refers the mythical Pelasgians, perhaps. 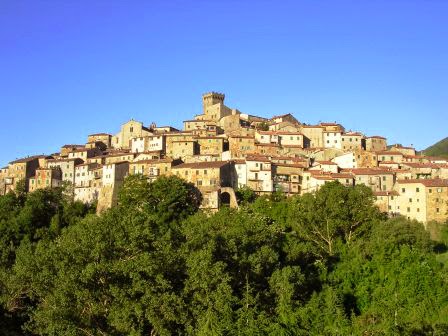 “Energetic” virtues of this area intrigued also Leonardo da Vinci's genius,  recently celebrated by Terme di Saturnia through the presentation of his "hundred most beautiful drawings" (published by the world leading expert Carlo Pedretti), but even a visionary like Davide Lazzaretti. Right on top of Amiata, one of the rare utopian experiment that have marked Italy’s history took place two centuries ago, thanks to the enigmatic figure of the most famous citizen of Arcidosso, historic village standing on the slopes of the mountain. Although everybody regarded Lazzaretti just as a reckless, addicted to a life so poor as dissolute, in 1868 he had a series of visions that radically changed his life: the suffering he underwent were nothing but evidence to induce him to a path of hermitage and preaching. Men had to work, help each  other and pool their assets in order to establish a "republic" of Rights on Earth. Not exactly what the newborn Kingdom of Italy had in mind for his subjects. He tried to convince even Pius IX of his mission’s goodness, but the inflexible Pope of Rome did not show any interest in his figure. He returned to Arcidosso and new believers gathered around him; so he built three religious institutions on Mount Lip (an Amiata’s relief), waiting for the upcoming age of the Holy Spirit. 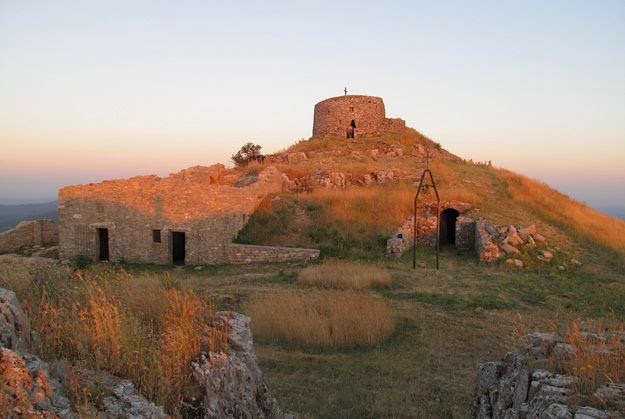 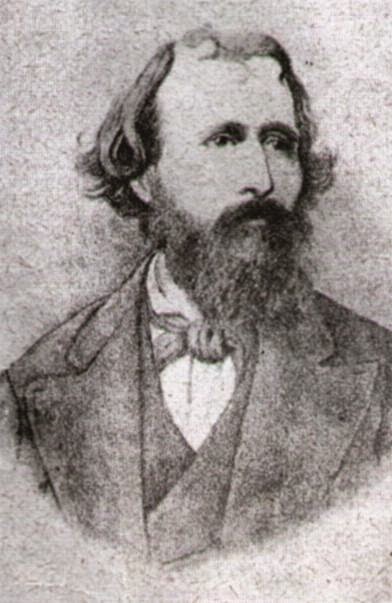 He preached to the whole area, even going so far in France, earning the nickname of "Amiata’s Christ", until in 1878 he was excommunicated as an heretic by Sant’Uffizio and, shortly after Pius IX’s death, shot dead by a policeman during a procession on Mount Lip. His followers were dispersed, but they kept on preaching their founder’s utopian socialism, while Cesare Lombroso, pioneer of physiognomic criminology, dissected his body in search of the seeds of madness.

About this short and intense epic, today it survives ruins of the Community on Mount Amiata only and a study centre in Arcidosso, but the yearning for peace of mind and  transmutation of the body continues to inspire new followers: not surprisingly, just behind Lazzaretti’s native village, since 1981 a Tibetan centre has been operating the Buddhist Gompa Merigar. Founded by master Chögyal Namkhai Norbu, it hosts a temple for the great contemplation and a stupa, in addition to a Mandala Hall where you can practice dance Vajra. Culmination of a journey of spiritual perfection that leads from Terme di Saturnia’s palingenetic waters directly to the skies of enlightenment.

Posted by Altrimenti at 3:36 PM