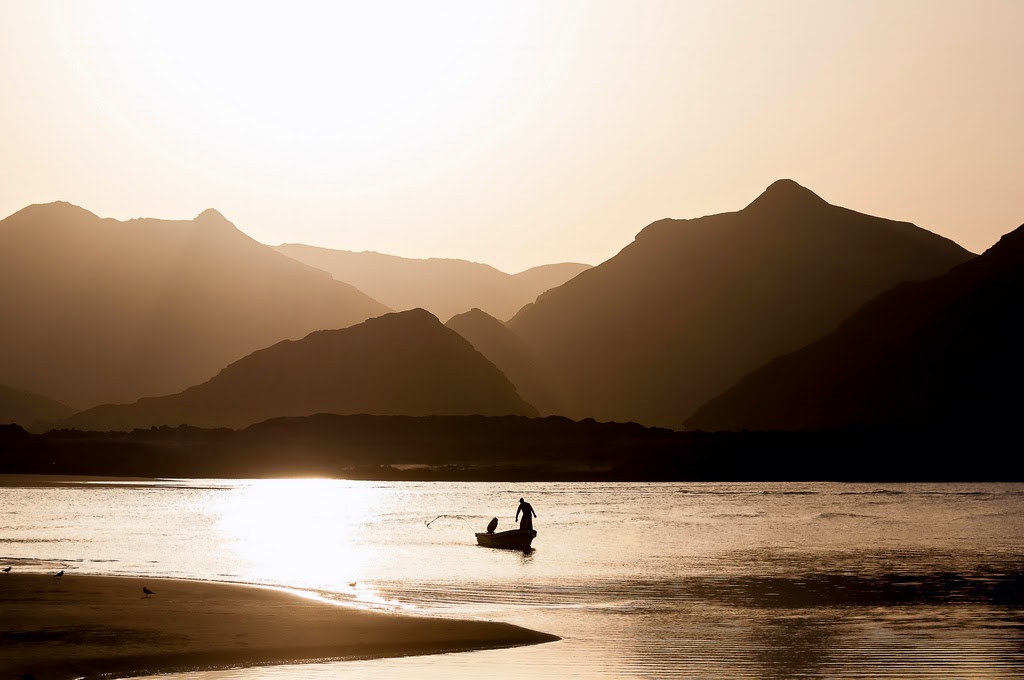 Original Italian text here
No proclamation, but simple evidence. With the usual elegance that distinguishes Omani people’s way of relating, Mohammed Said Mamari, advisor by the Foundations and the Religious Affairs of the Sultanate, has arrived in Italy for the new stage of the traveling exhibition "Religious tolerance. Islam in the Sultanate of Oman”.

Housed in Palazzo Reale in Milan and open free to the public until next February 22th, the exhibition weaves together information about lifestyle in the great Country at the foot of the Arabian Peninsula, evocative photos, as well as amazing wooden sculptures where the Arab handwriting characters turn into images of devotion. Between scents of incense, miniatured Korans (whose sacredness provides for they are always kept above the soil, with the eventual burial of damaged pages in dried up wells) and touching testimonies of Wolfgang Ettlich's video documentary, Islam shines in all its centuries-old complexity: it arises in tendencies, schools, aspirations but, above all, opens itself to that extraordinary capacity for integration which, not coincidentally, has allowed it to become one of the pillars in human history. 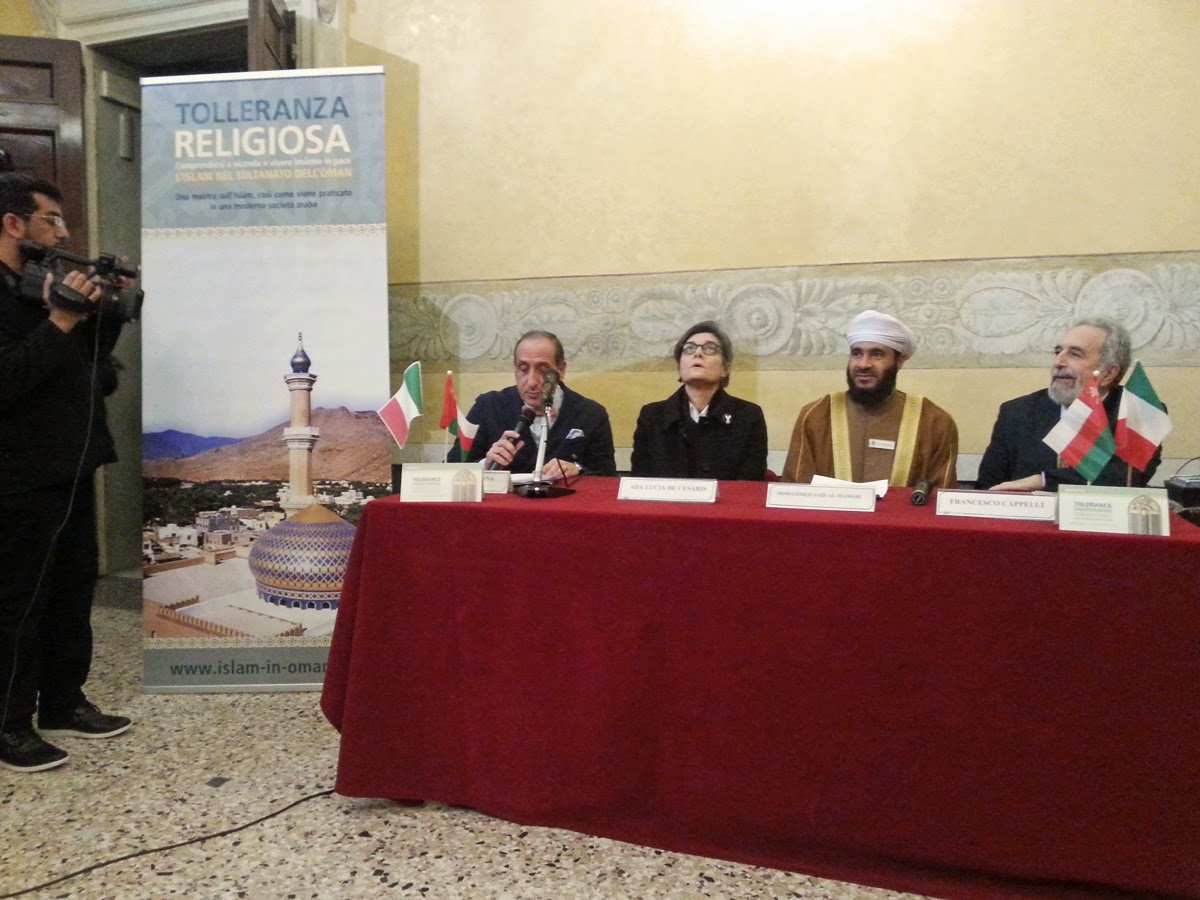 "If forms of cohabitation have been possible in the time - said Ada Lucia De Cesaris, Milan’s deputy mayor - then that means we must renew the dialogue, evaluate new basis on which building trust and mutual respect, because the foundations of interculturalism are in running just today. Milan, meeting point of the globe through Expo2015 from next May 1st, feels the responsibility to turn attention to a need not be put off, becoming a privileged laboratory for the policies of the future”. 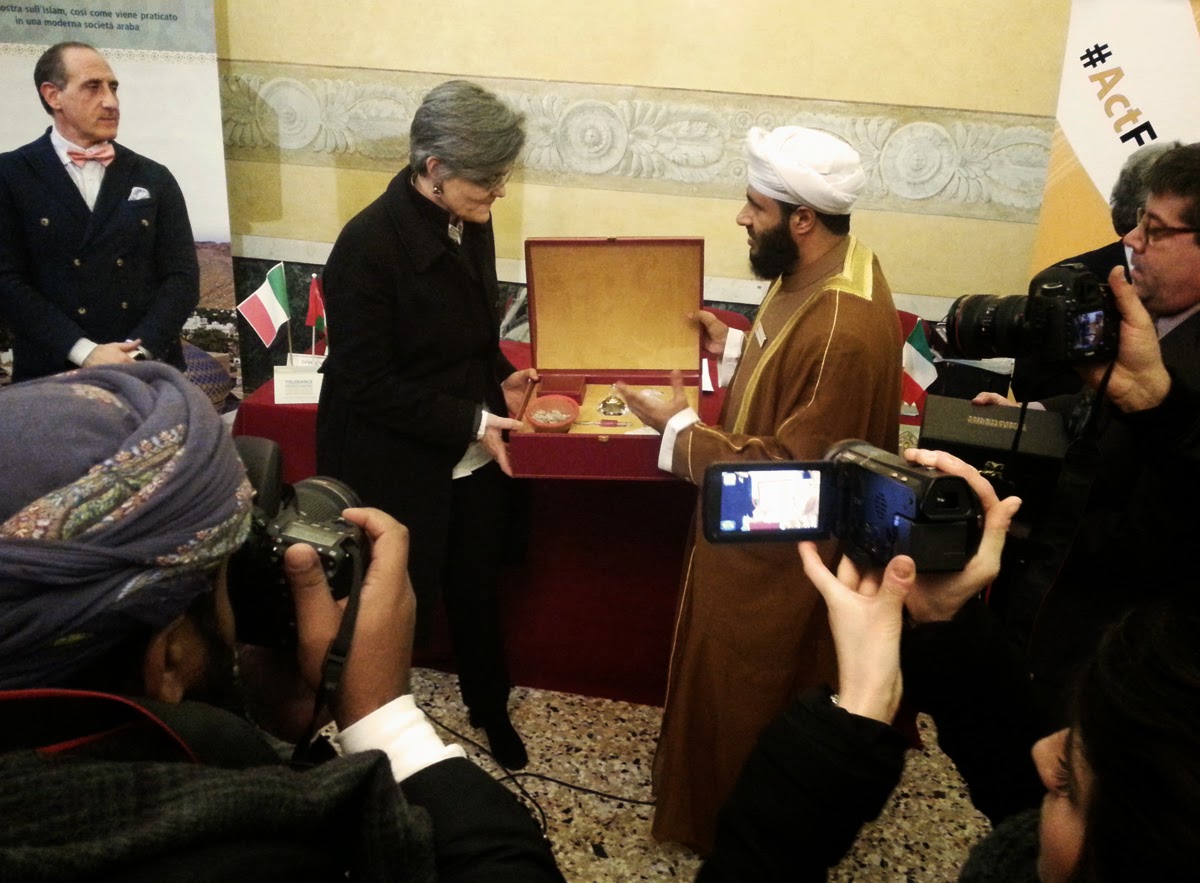 Thanks to the establishment of an official list of metropolitan confessions, already risen to 150, and through a school project on the history of the five most influential religions, the city is ready to re-launch the universal aspirations contained in the famous Edict of the Roman Emperor Constantine (313 AD), cornerstone on which the foundations of religious coexistence were laid in the space of public institutions. Oman has been investing much energy and resources in this project since a long time, bringing to the world its exhibition, opened in May 2011 in Vienna, Austria, and from there already landed in over 20 countries. 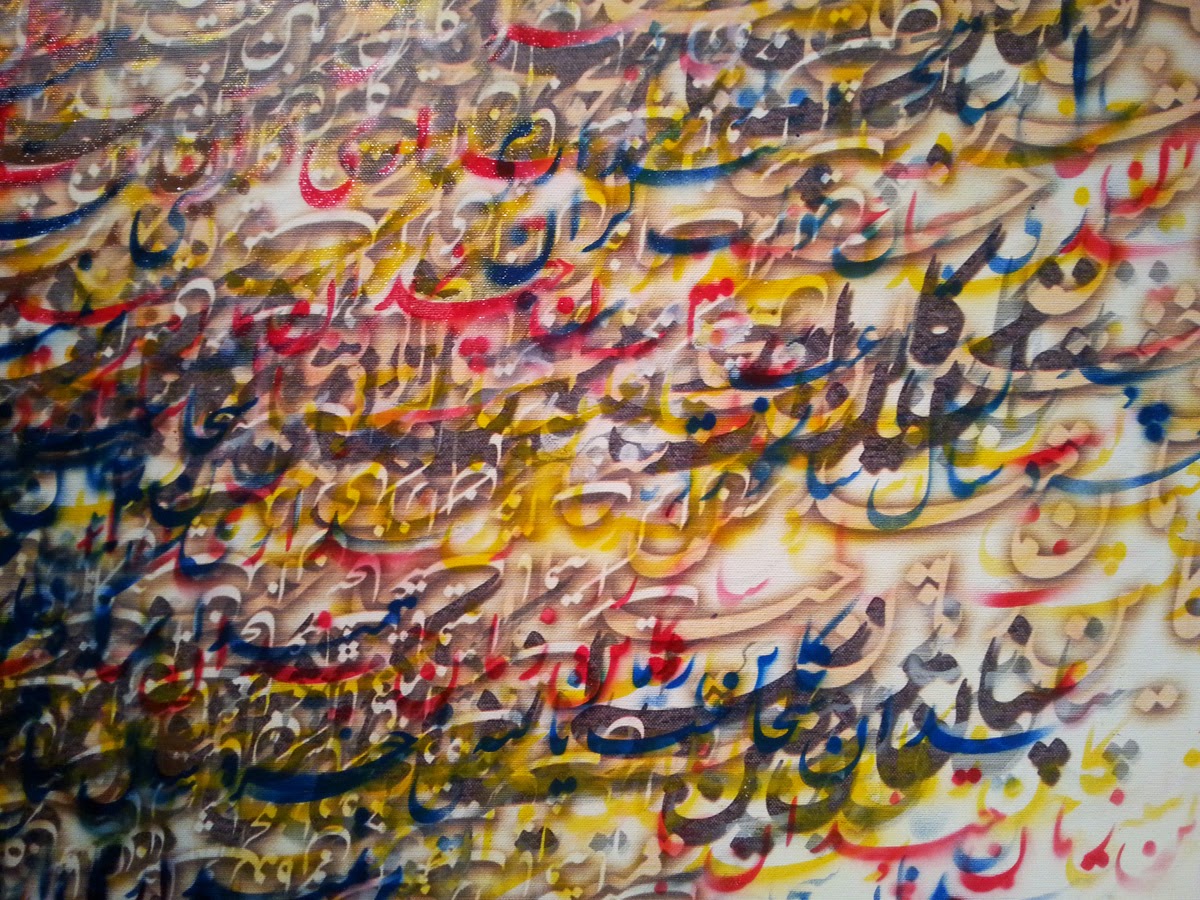 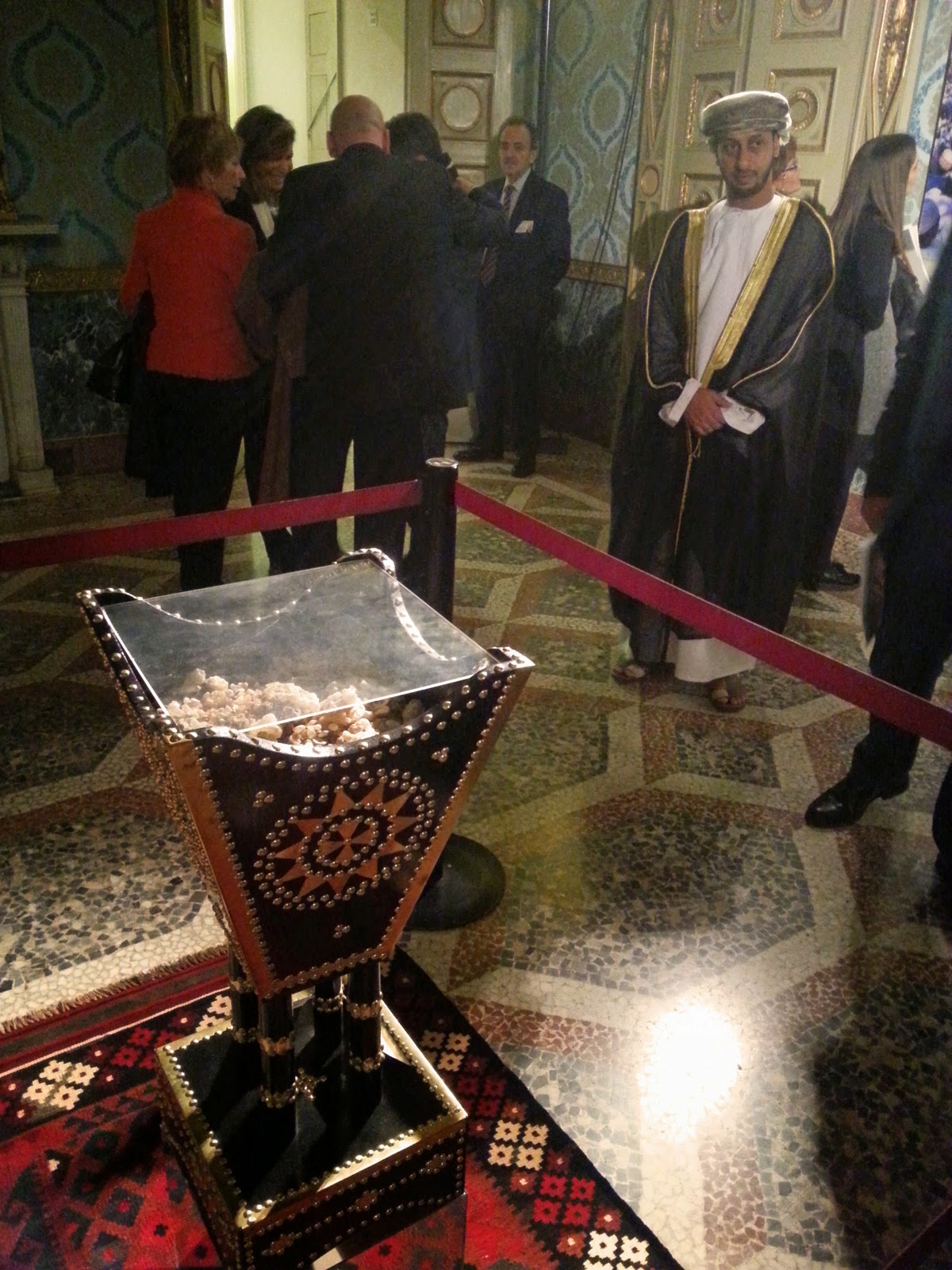 "The religious intransigence within the Muslim world - this the proclamation of Nizwa reminded all visitors to the exhibition - can only lead to backwardness and spreading violence, elements in total contradiction with the principles of true Islam, which condemns, on the contrary, all forms of fanaticism and radicalism, being itself the religion of liberality”.

The best proof is precisely the social organization of the Sultanate, which in the complexity of its territory, from the fjords of the Musandam Peninsula on the Persian Gulf to the peaks of al-Hajar (with the top of the Mountain of the Sun, 3,004 meters high), as well as to the dunes of the Central Arabia desert, was obliged to find forms of mediation for a peaceful coexistence in its limited living spaces.

Got a letter directly from the Prophet in 629 A.D., the two kings of Oman, Abd and Jayfar, established an extensive correspondence to fully understand the principles of the new religion and, without raising any sword, accepted Islam quite peacefully. Indeed, it was then that the Country made the transition from traditional Bedouin cults, whose origins are "recorded" in the unique and antique bronze site of Salut (III millennium BC), near Nizwa. A site which was made known to the world thanks to 9 archaeological campaigns coordinated by Alessandra Avanzini, from the University of Pisa. 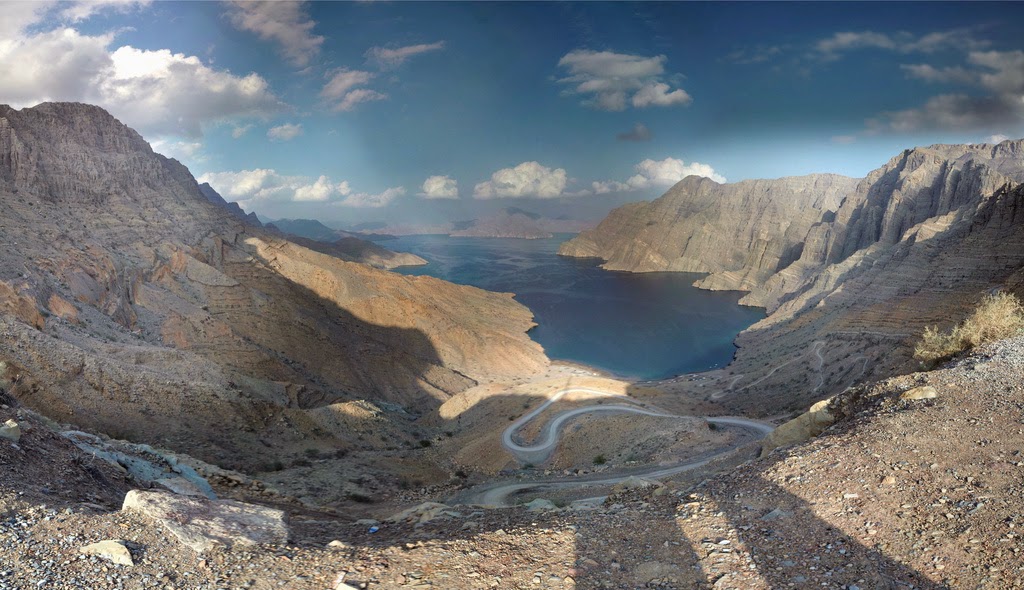 And it was right here that King Solomon’s travel stories placed the birth of the powerful system of fortresses which have historically characterized the profile of the Country, finding the sovereign himself in the presence of a mysterious and ancient building no one knew the origin about, if not a sacred eagle (or maybe the priests of Mesopotamia, which Oman always maintained active commercial traffic with). And it was always here they developed the complex network of Aflaj that, as underground veins, brings fresh waters to the whole Omani territory (5 of them are also Unesco heritage). Many, however, remain the mysteries surrounding Oman’s origins. 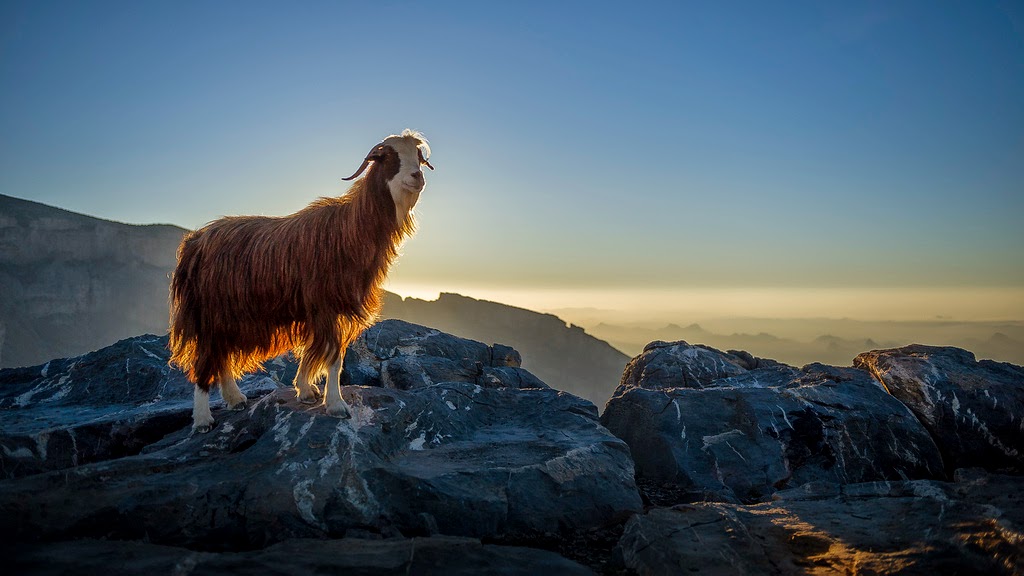 The same ghost city of Ubar, "the Atlantis of the sands" in Dhofar province, is definitely much more than a station of the historic incense route: if its foundations date back to at least 5 thousand BC, the huge limestone cavern on which rises is still an enigma for archaeologists, who have been able to realize the size of the agglomeration only through satellite data. The detachment from the ancient cults and the overlap of Islam did not involve, however, any trauma. When a conflict broke out between the rival Umayyad caliph Ali and Mu'awiya, founders of Shiite and Sunni tendencies, the king Abbad bin Abd bin Al Jolanda remained above the parties, rather than developing a third way: the Ibadi school of law, then spread through the hub of Basra in Iraq. 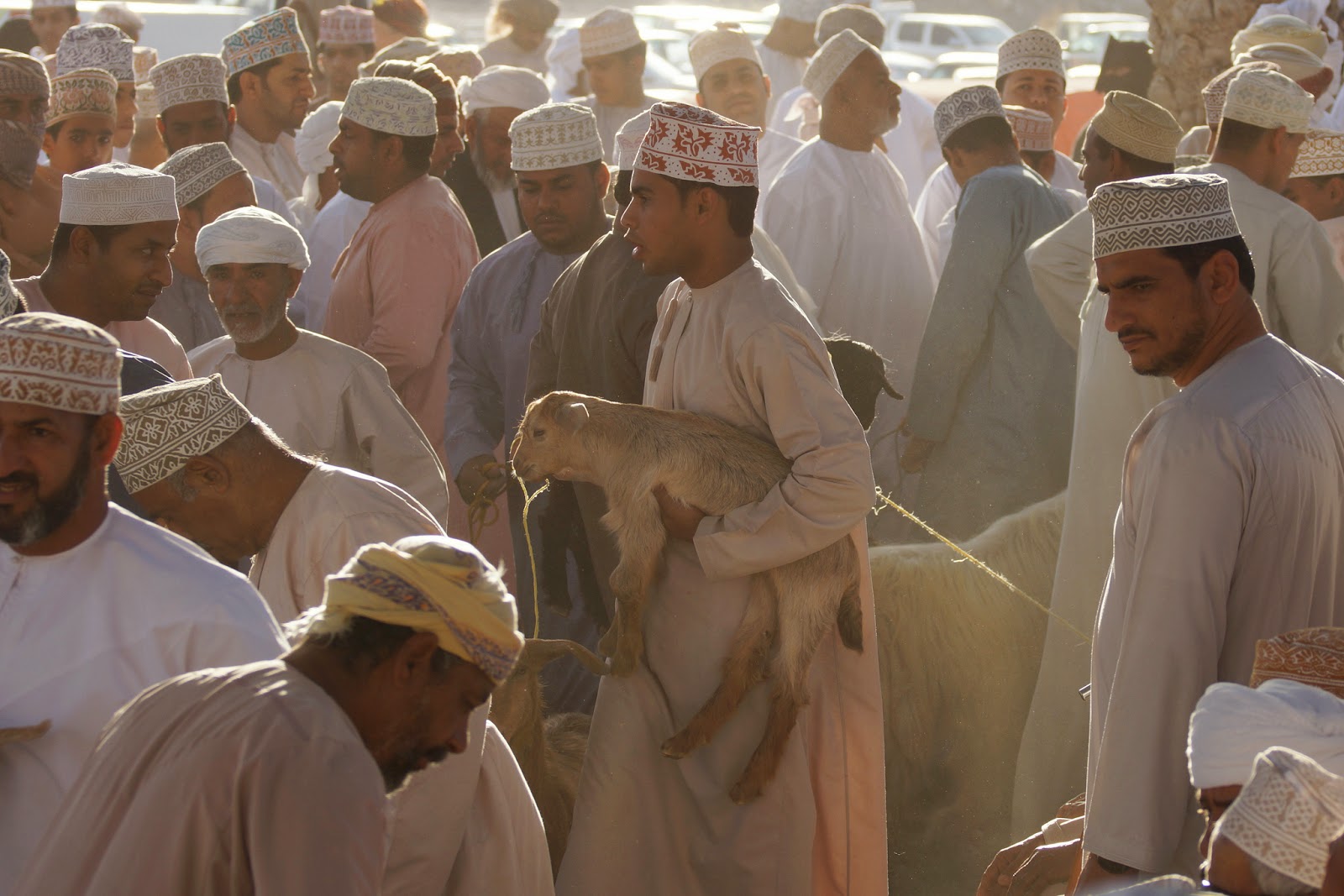 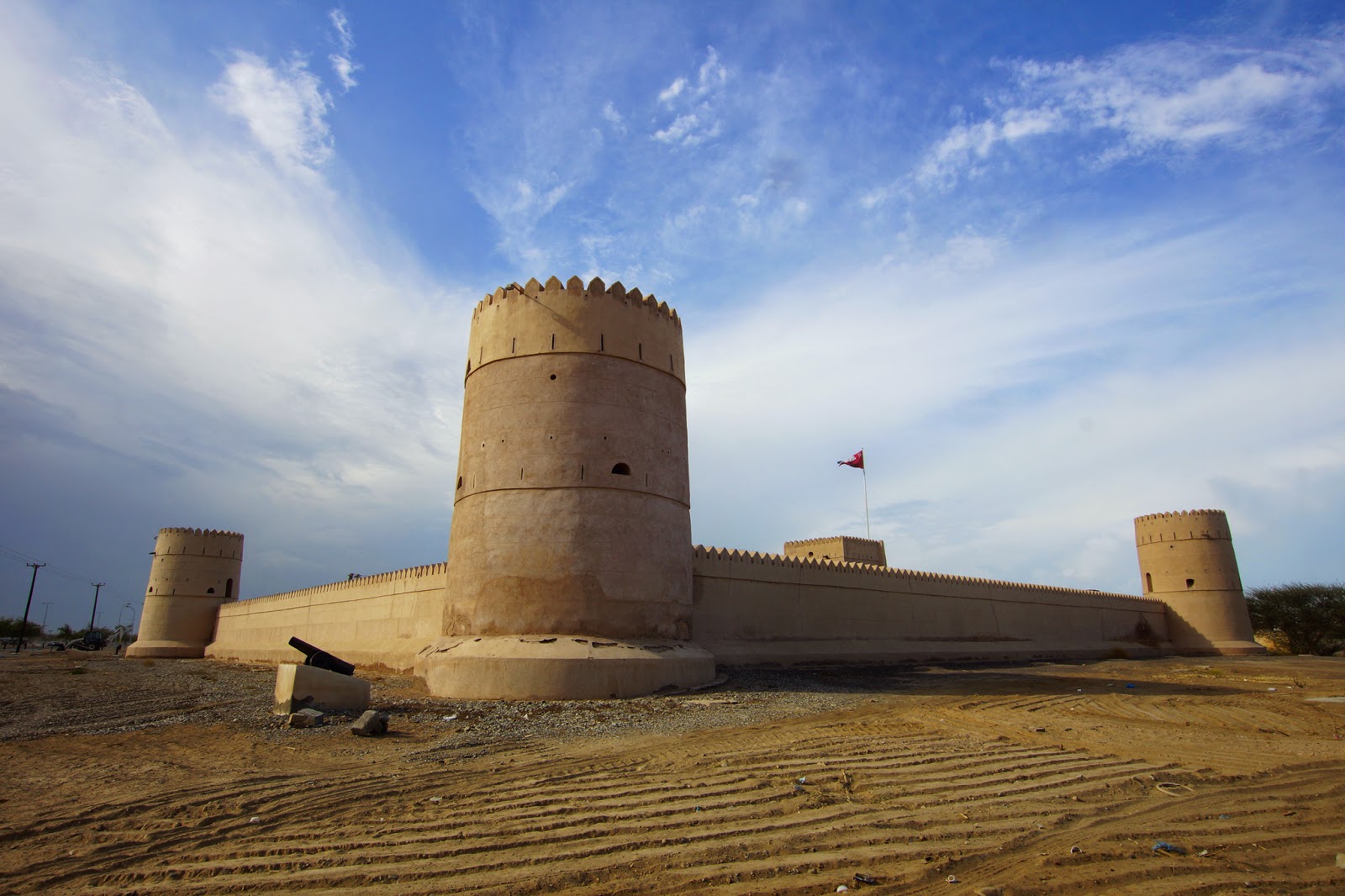 According to this current, all other religious views or interpretative models are deemed worthy of consideration, while the bloodshed due to theological differences is accused of abomination. Every single Muslim theologically educated then becomes a potential candidate to fill the role of imam, a first among equals, whose role as an interpreter is always subject to the believing community (Umma), if his interpretation differs from the popular sensibility. It is therefore not a coincidence that Jews, Christians and Hindus have always lived in Oman without problems, being able to build and operate freely their temples - especially in Muscat and Salalah - on condition that they did not organize missionary activity (the same prohibition for Muslims themselves): the management of religious communities is in charge of the State, through the Ministry for Religious Foundations, in order to ensure equal rights to each confession. 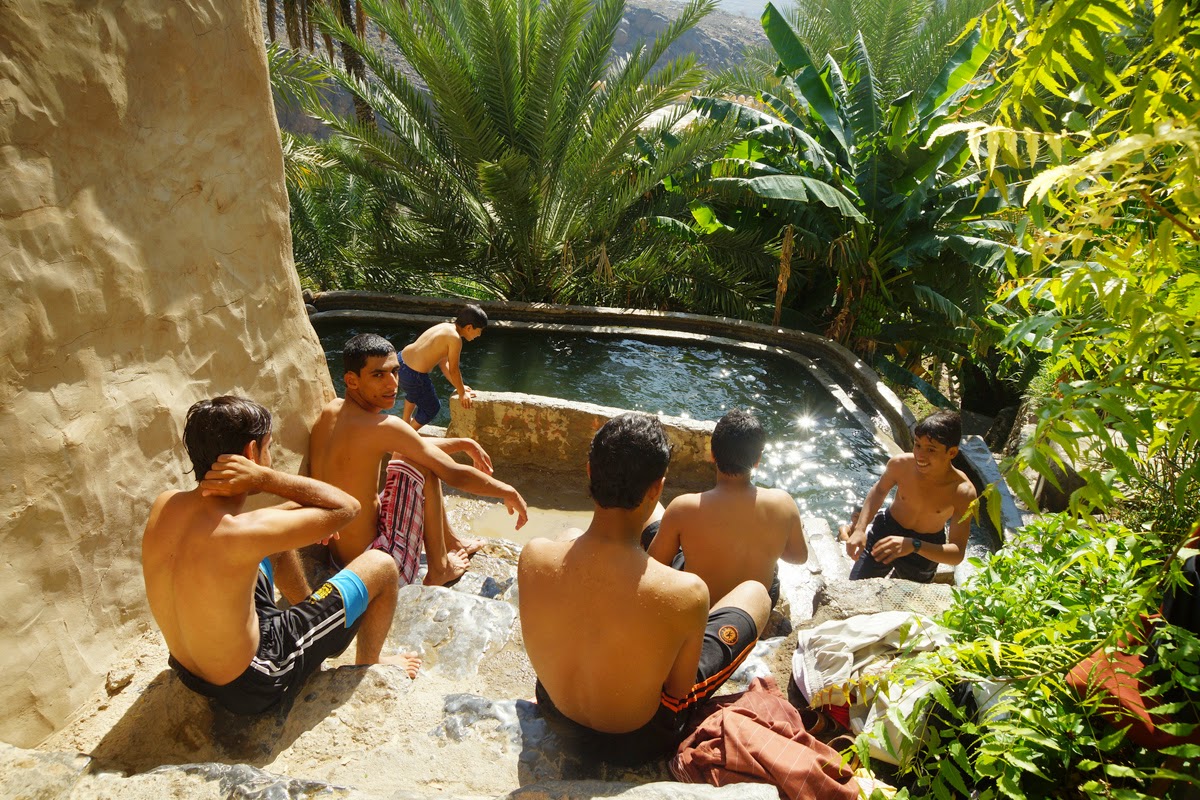 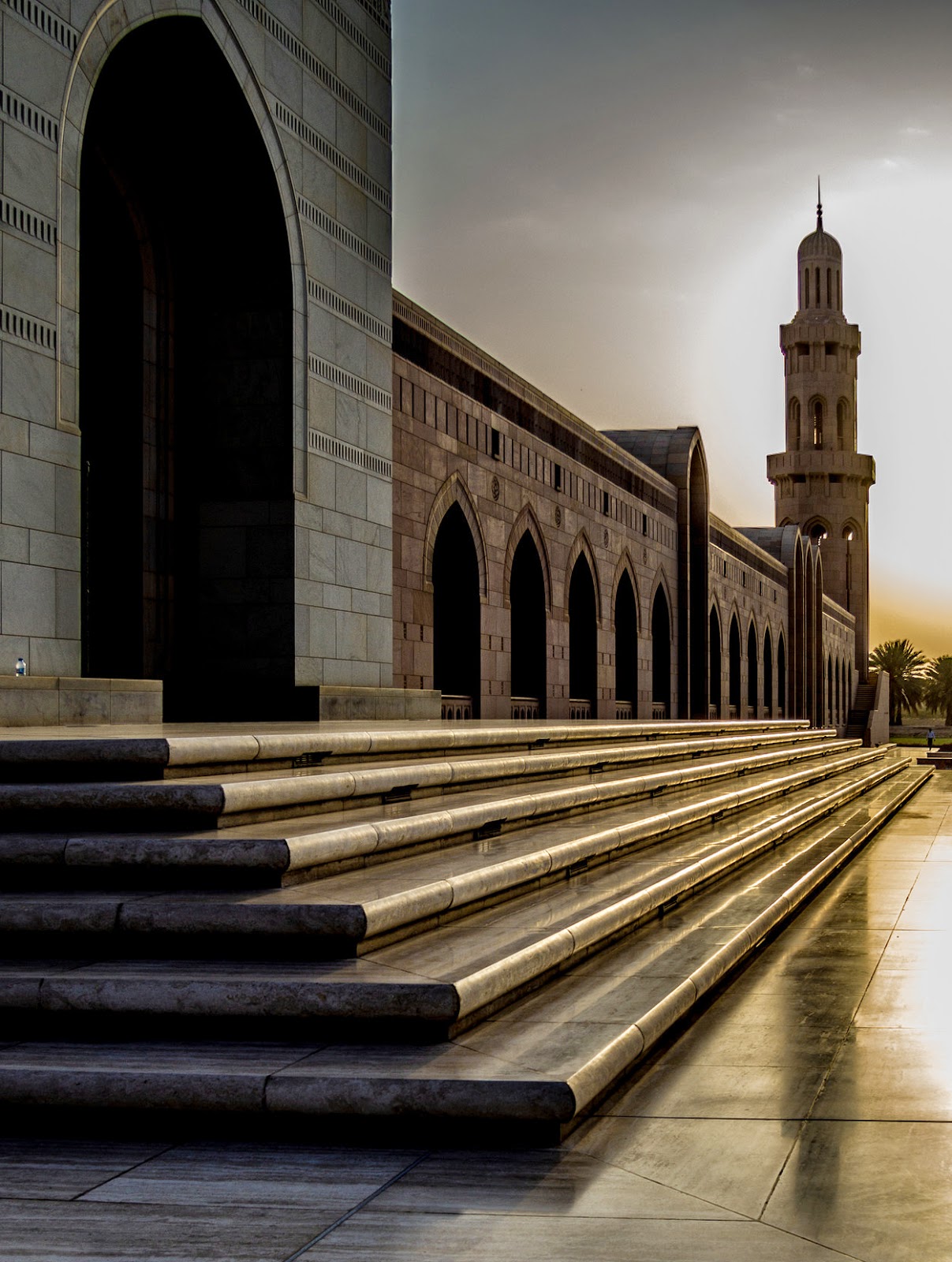 Unlike other Muslim traditions, the Ibadi school favors the principle of simplicity (its mosques are even without minarets and little decorated internally), although in Muscat has been built a unique place of worship of well 416 thousand square meters (the Great Mosque Sultan Qaboos) that, in the light of a 1122 Swarovski crystals bulbs chandelier, manages to blend itself every other Islamic style.

The harmony of its contamination has even inspired the creation of its own Koran, whose decoration work required almost eight years (making it available only in 2006, the last of a series of reproductions whose refinement and elegance have created an authentic Omani school).

Similarly, women contribute to the development of society, rather than being guided or influenced, being able to count on a service of compulsory education up to university.

They must be able to support themselves and are entitled to exclusive institutions, such as the "center for religious education of women" (directly managed by them). They have full political rights, holding ministerial positions, and can contribute to any work role, paying even military service. 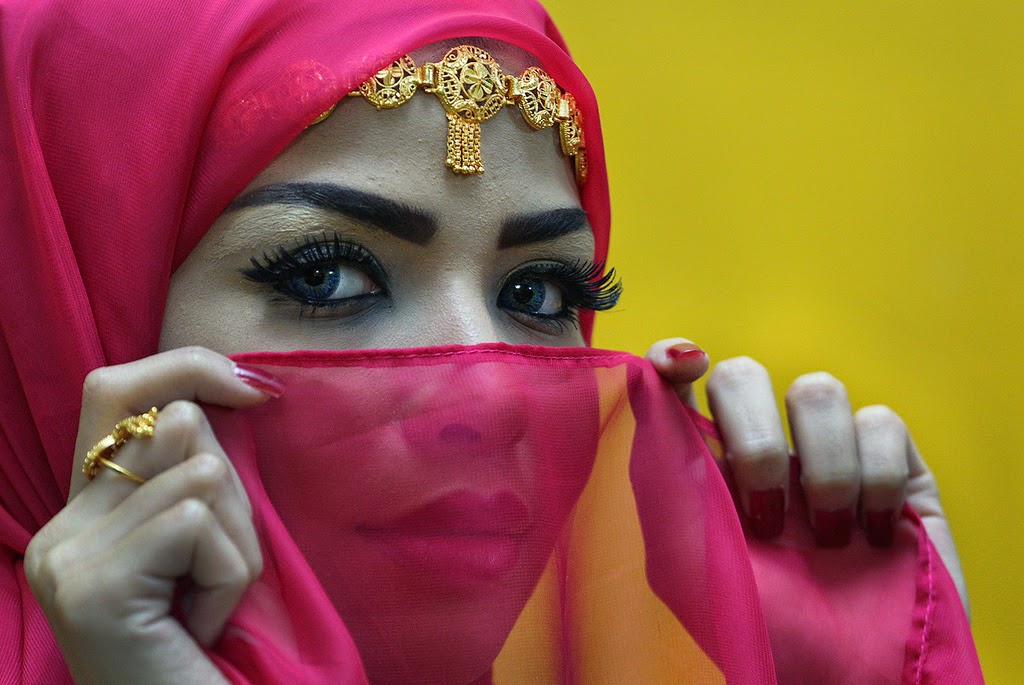 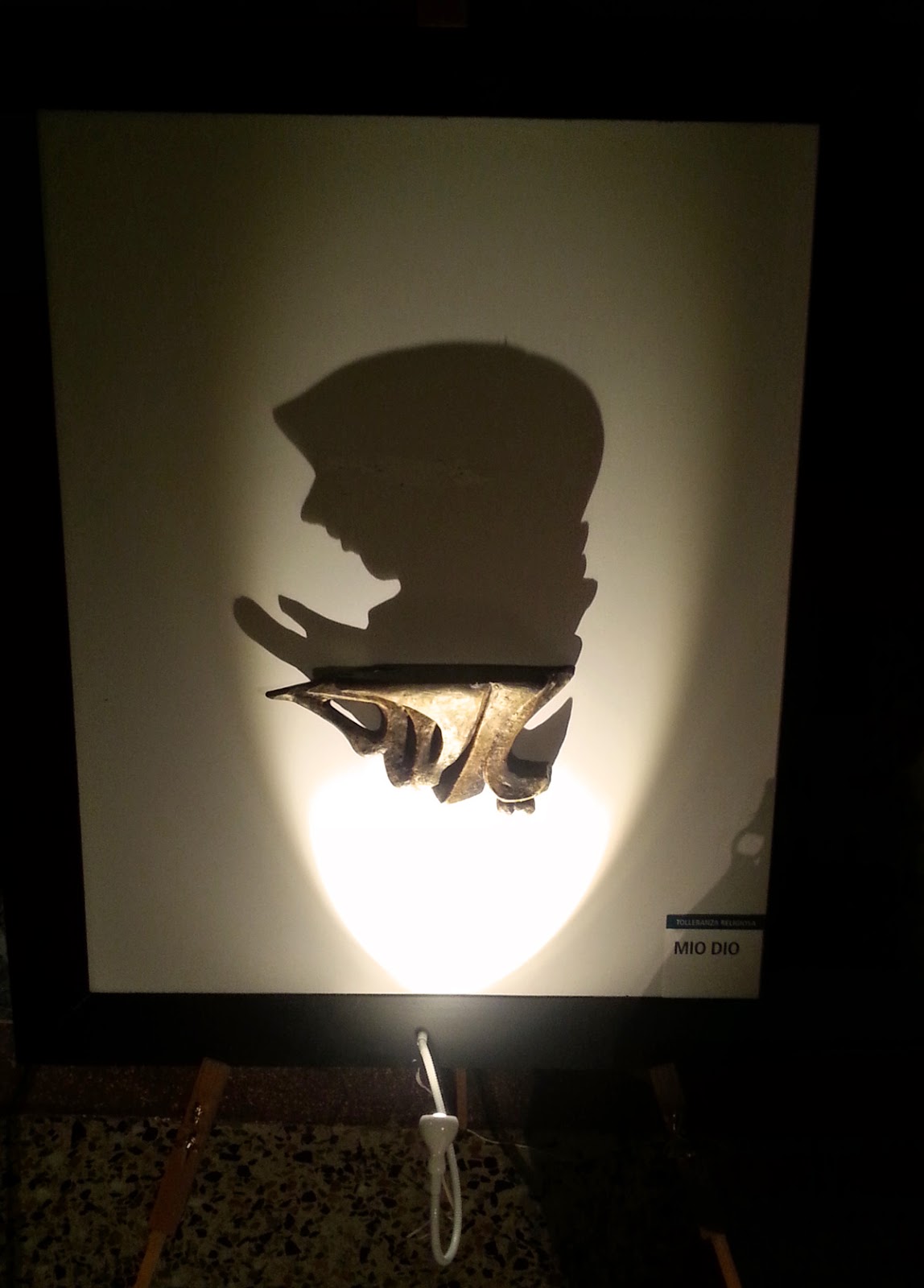 In front of a child’s birth, they are always supported by an "extended" family, and invariably called to plant a bud of date palm, so that the children can have enough to eat for their lifetime. To open their eyes on the world, the umbilical cord must be buried in holy places, while newborn’s eyelids are painted with the ashes of frankincense: as well the mouth is sprinkled with chopped dates chewed, so that the right ear can better hear the exhortation to pray, whispered before the invocation against evil flows into the left one.

The family finally will pay for the protection of the child as much silver as it will be the weight of the hair, shaved on the seventh day: then, and only then, the child will receive its name, preparing to circumcision in the hospital if it is male, but not running any risk of mutilation if female.

Apparently, however, not much attention is paid as well to the death, as the tomb of the deceased is a simple pit where storing the white coffin of the deceased, carefully washed and scented, but who has never letterhead inscription: at most, only two stones are positioned at the end of the tomb for males, or three for females. Any name can be written, it is still intended to be eroded by time. 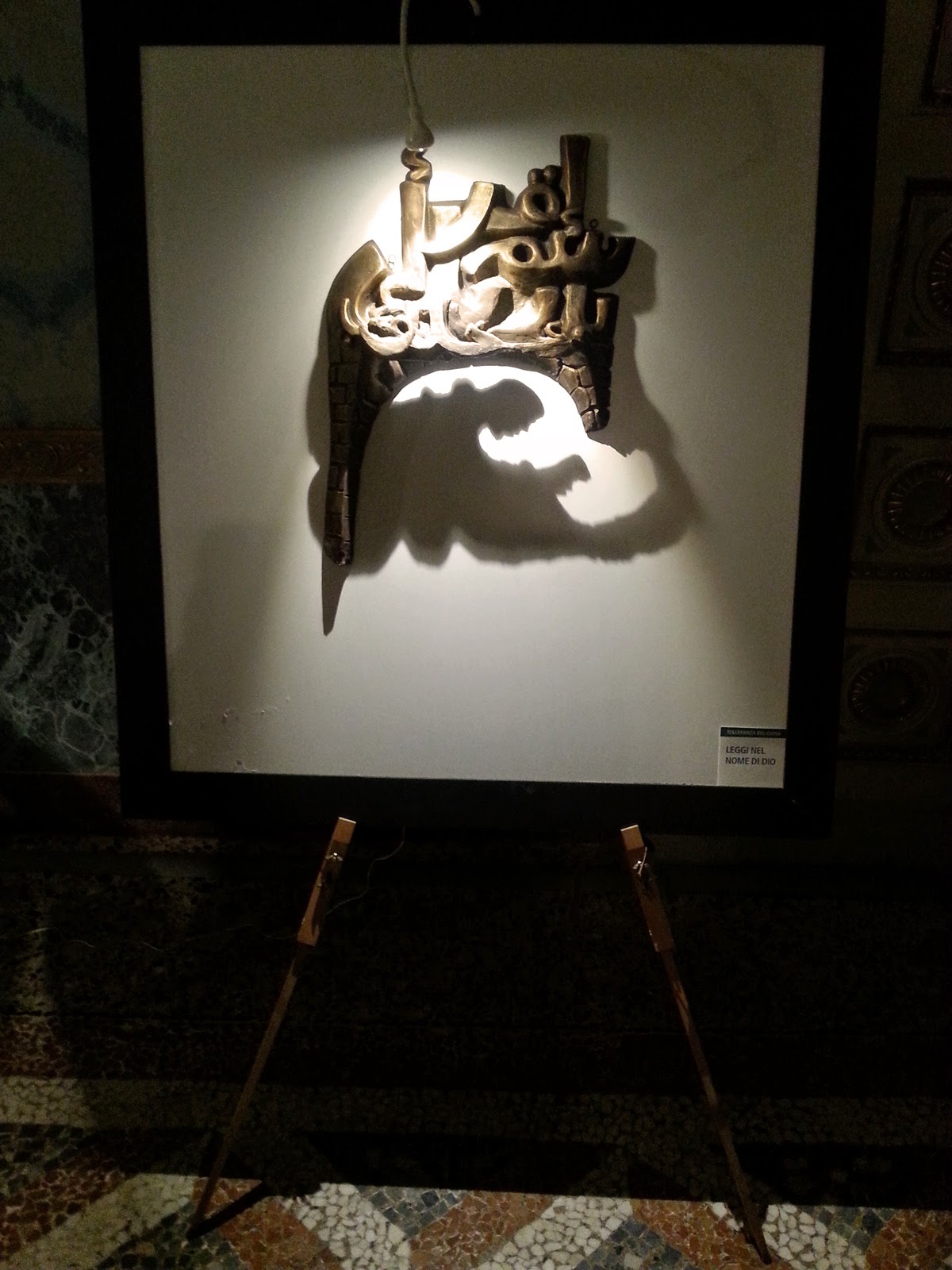 During the life, however, the vocation to solidarity prevails always and it is enhanced by the festival of Id (or sacrifice, scheduled on the ninth day of the twelfth month of the Islamic calendar): an offer to voluntarily (sadaqa) is always accompanied by a mandatory (zakat, purification), levied though from a certain balance sheet and never more than 2.5% of annual income.

It was perhaps for this reason that the famous sailor Sinbad often returned on the coast of Oman, whose maritime empire of spices and incense, during the golden age of the eighteenth century, reached the antipodes of the entire African continent: its moorings have never been simple shelters for adventurers, but safe and happy harbors from the fickle waves of life. 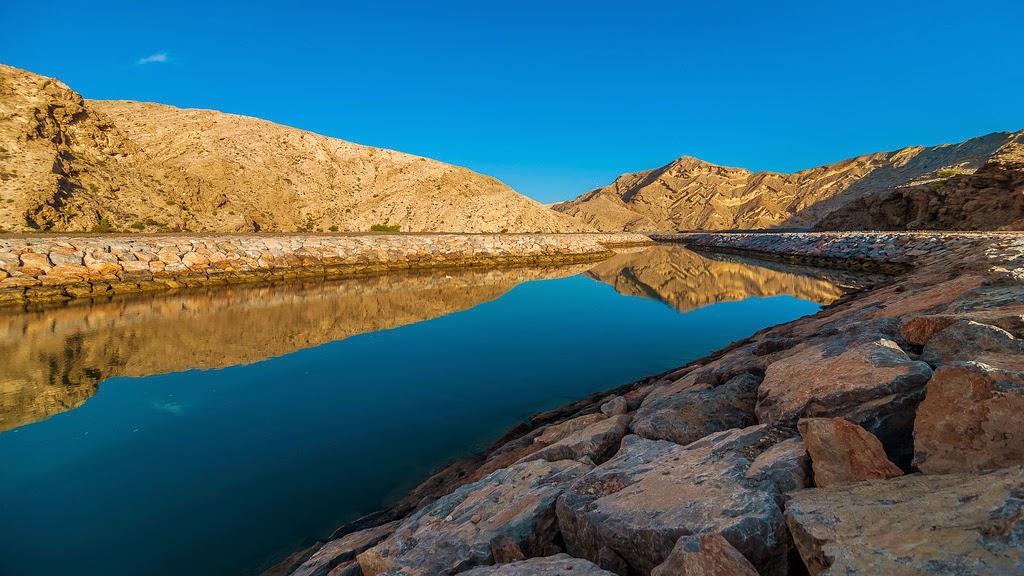 Posted by Altrimenti at 7:29 PM