"The last villages on ice" are safe. At least for now, as the fateful date of May the 20th, 2015 has finally smiled upon the Monegasque couple formed by Nathalie and Alain Antognelli, allowing them to print, perhaps, one of the most precious documents produced over Greenland today: a reportage-book financed by crowd-funding and dedicated to their pioneering expeditions on kayak along the west coast of the largest island in the world. They needed 7 thousand euro to publish the whole material collected in three different trips, between 2009 and 2014; they have obtained 7,065.

"At the centre of rapid political, climatic and social changes – the two photojournalists tell - Greenland we have known until now may turn out in a few years. So we decided to explore its most isolated communities on kayak, starting from Upernavik and eventually reach almost 50 villages where people still follow a traditional life-style: well, a lot of curiosity, but a few frills also. On board we could not carry a load over 60 kilos, inclusive of food reserves, a shotgun, an Iridium phone, dehydrated meats, in addition to safety and camping equipments, together with a computer, maps and GPS. All this, on double copy almost, in order not to run the risk of irreparable loss". 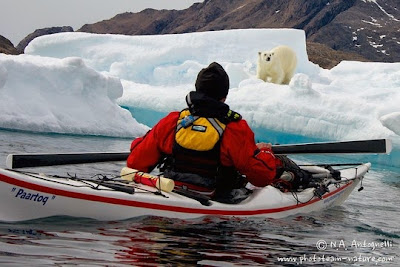 Accompanied by playful whales along nearly 3,500 km, ready to confront for hours through challenging splashes and false ramming, Nathalie and Alain initially thought to reach Savissivik, 76 degrees of latitude north, to winter only. Actually they have been adopted by one of the local and very sociable families, being directly involved in the life of the last hunters of narwhals, just like it happened among the 200 inhabitants of the even more remote Nuussuaq. From a pioneering geographical mission, their journey has kept bound to nomadic lives to be preserved at all costs, documenting this fragile beauty in a video at the debut during these days on TV5 Monde. The city of Milan has replied the French-speaking television channel by its own way, having launched the second edition of Be Nordic festival, a great celebration of the Arctic and Scandinavian world through book presentations, video projections, food tastings, music and language lessons.

"Of course not everyone approaches Greenland in a so enterprising way - the destination specialist Peter Morell Hansen highlights (chief of the Danish tour operator Arctic Adventure) - bearing in mind that the means of travel used by the locals themselves are ferries of the Arctic Umiaq Line, able to go through the fjords so as the herds of sheeps, while steaming blocks of musk ox and potatoes are served on the table. But there are at least 5 experiences which each Greenland’s visitor wants invariably to try, to the point that we use to talk about "Big Arctic 5" today: the races on dog sleds, the vision of the amazing northern lights, hiking among amazing architectures of ice and whale watching; last but not least, the full-immersion in the lifestyle of the most extreme pioneers of the globe". The interest in their daily habits, but especially around the origins of the most remote communities, is growing hand in hand with ice’s melting revelations: a new - and perhaps last - geological era that seems to rewrite man’s history radically.

Recently people have started to raise a lot of questions, due to the unexpected statements of a Danish-Canadian archaeological team, according to which Greenland – “discovered” around the X century - would have remained not completely unpopulated after the end of the contacts with the Viking community five centuries later: "the analysis of animal bones dating back to the farms of the settlers - have confirmed Jan Heinemeirer and Niels Lynnerup, researchers at the University of Aarhus in Denmark - show no sign of damage or disease, despite the cooling of the climate had pushed the farmers to change their diet and that of cattle, drawing support mainly from the sea. In reality the isolation of their community would seem to depend from the declining demand in Europe for sealskins and walrus tusks, through which the settlers could obtain metal objects to better sustain environmental challenges. No longer farmers but fishermen, faced with an inevitable loss of identity, the descendants of the Vikings had only two ways to choose: turn themselves in Inuit, or emigrate".

Although the last official act of their presence has been traced to the marriage celebrated in the ruined church of Hvalsey fjord, September the 14th, 1408, it is the decreasing number of male skeletons in burials to let assume a gradual emigration of locals, rather than a mass exodus that emptied the island suddenly. Christian Koch Madsen, student-researcher of the National Museum of Denmark, thinks that life would kept on in Greenland for at least another 200 years since the last marriage certificate, while a part of the descendants merged with Inuit communities. 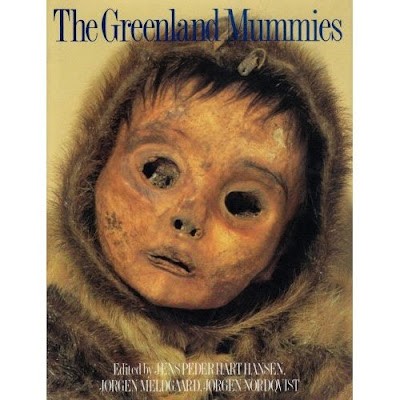 The "Qilakitsoq case" - the mummy of a six month old baby buried alive with her mother and discovered in 1972 (along with other bodies now on display in the Museum of Nuuk) - is rather symbolic about the way of life in Greenland 500 years ago: relying on a primarily marine, but still full diet, it was not the lack of food to cause the thinning of the community, but the problem of physical disablements. Qilakitsoq’s child was suffering from Down's syndrome and the community was forced to abandon him to frost, because – without the contribution of healthier and more enterprising men - it could not afford to keep unsuited individuals to the harsh environmental selectivity. The same can be induced around the mummy of another woman found in the same tomb, whose DNA attests she was deaf, blind and cancer sick.

Far from relegating life in Greenland in a short span of centuries, starting always and only from an ethnocentric point of view, the combination of archaeological, anthropological and biological data is slowly claiming confirmations to one of the most daring theories formulated by scholars: the polar island as first and original cradle of humanity, from which peoples of the great civilizations of Earth would have spread and diversified. An idea strongly supported by the father of the Indian nation Bal Gangadhar Tilak in his seminal essay "The Arctic Home in the Vedas", released in 1903, but resumed in an even more convincing survey by contemporary Italian researcher Felice Vinci, risen to worldwide headlines thanks to his revolutionary book "The Baltic origins of Homer's epic tales". Starting from the paradox of the geographical location of the ancient island Ogygia, cited by greek writer Plutarch in his “De facie quae in orbe lunae apparet”, Vinci doesn’t merely recognize it in today's bird paradise archipelago of the Far Oe Islands (Mykines island), but showed meticulous correspondences between the ancient Achaean world of Iliad and Odyssey and the entire Scandinavian-Baltic area.

The so craved Ulysses’ Ithaca (coinciding with today's megalithic island Lyø) would be based in the very heart of Denmark, exactly as Menelaus’ Peloponnesus (the island, as the original Greek name just means, of Sjaellend), gradually pushing the boundaries of the poem until the Houses of Hades in the North Cape, the land of the Cyclops along the Norwegian coast or the unfortunate city of Troy in southern Finland (between Helsinki and Turku). Dark seas, thick fog, blond heroes, names suspiciously assonant: Homer’s images and words, much closer to an Atlantic than a Mediterranean landscape, evoke a flourishing Bronze Age civilization in the Arctic basin. A large linguistic family (and perhaps genetic, like the case of the ancient "blond Inuit" let suspect), of which the Greek history would not be other than the distant echo, due to the transfer of its people by the intensification of the northern climate.

The "discovery" of Greenland, under this light, then takes on the dimension of a return to the true place of origin, whose memory has probably faded way in the course of millennia, without ever dying out completely. A sort of magnetism that goes far beyond the mere physical phenomenon of orienteering. It is instead that ancestral "recall", which constantly the most famous explorers of Greenland have spoken of, Italians included: from Leonardo Bonzi, who in 1934 used the famous Nansen’s sled to penetrate Scoresby Fjord (now in the museum Copenhagen), to Silvio Zavatti, founder of the Italian Polar Geographical Institute and pioneer of the Ammassalik area; from Guido Monzino’s multiple missions in the 60s to Carlo Bondavalli’s first solo expedition in 1982, one of the few to achieve just the Magnetic Pole. But if explorers often end up in the spotlight of stage for their amazing feats, no less decisive have been the contributions of scholars like Giulia Bogliolo Bruna, an expert on the early contacts between Inuit and Europeans, or Gabriella Massa, author of Manifesto for the Poles ( "More Culture to save the Nature"), getting to Daniela Tommasini, professor at the Nors-North Atlantic and Arctic Studies department at the University of Roskilde, as well as author of a study on how to develop sustainable tourism in Greenland.

Analyzing the cases of small communities in Ukkusissat, Itilleq, Qaanaaq and Ittoqqortoormit, towards which now tend to go cruises able of carrying up to 3 thousand passengers, the risk of impoverishing local communities by buying everything they have to offer is almost associated to an act of predation: tourism in Greenland should therefore be granted a special status, so that the transmission of culture or peculiar know-how replaces the consumption of material goods, just as once it happened with the engagement of local bards and singers of sagas. A small, but fundamental revolution, from which returning to inhabit the world in the dynamics of the exchange at par. Because Greenland, today more than ever, is home of our essential knowledge: an house, however, made of melting ice and regenerable only there, where it’s the nature alone to decide the to-be rhythm. 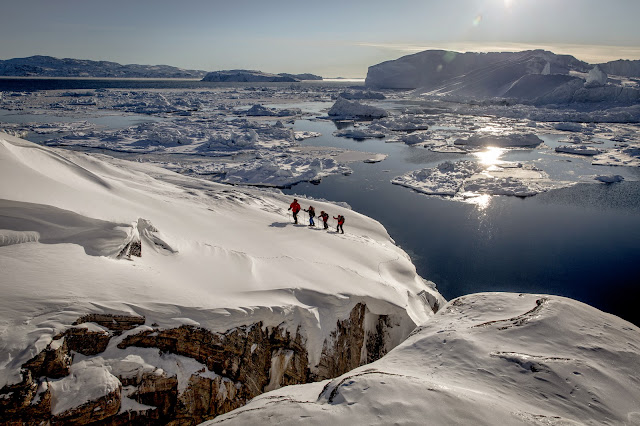 Posted by Altrimenti at 3:42 PM