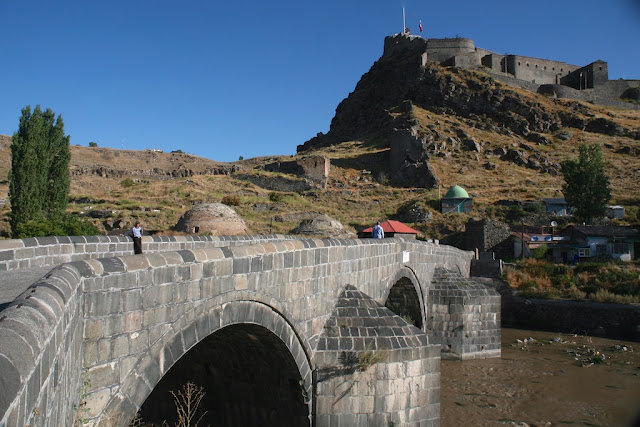 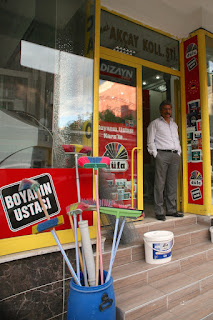 Behind hotel Miraç in Kars, where the chessboarded streets tangle up themselves in busy mazes, Vedat Akçayoz’s paint store is not a dead end. Indeed, it is probably the most suitable place to try to understand why the plaster of the old Tsarist outpost, instead of camouflaging its troubled history, let emerge large cracks on the walls of its homes. Having a look at the entrance window is already enough: next to a jar of water-based paint or an ox hair brush, pictures of bearded men, with a wise and a little proven expression, match those of women in pure white lace dresses, whose delicate headscarves are invariably knotted around corn-blond hair. They seem totally out of place at a first glance, except for providing then an unexpected harmony to the whole, as if the cerulean blue of their eyes served to remember that the sky, in Kars, is able to dispel the frequent gloomy clouds in a blink of eyelashes. 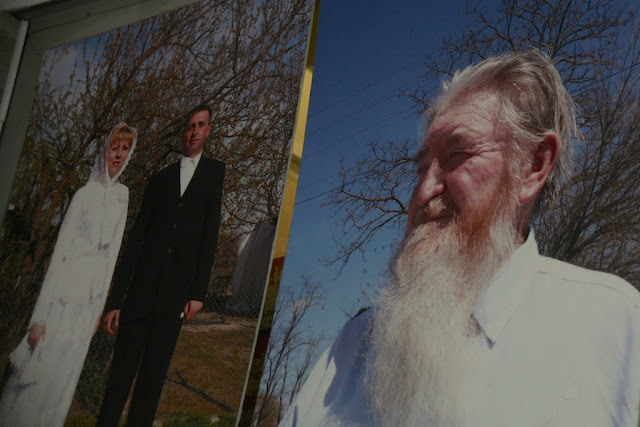 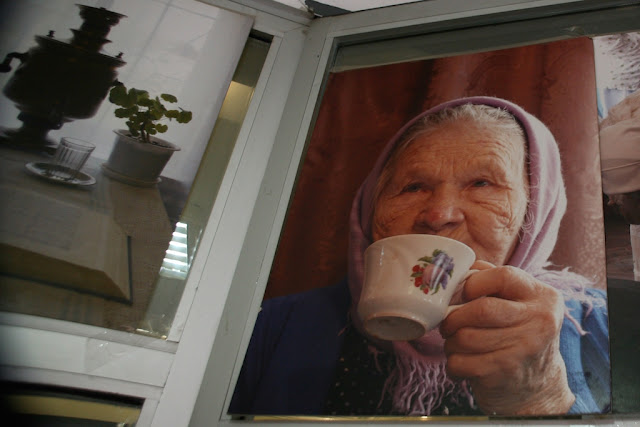 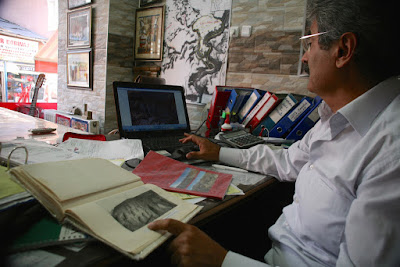 "I thought you were one of them" - smiles Vedat, set in a leather chair behind the window. Handing over the chair to sit beside him, immediately he takes care there is black tea to offer, while an employee is already on the road to look for a strawberry ice-cream. "Every now and then they come here - resumes with enthusiasm - someone from Canada, some others from the United States or New Zealand, but it is not even uncommon they come down from Russia or Georgia. To me it is as if they were back home, they are always welcome in my museum”. 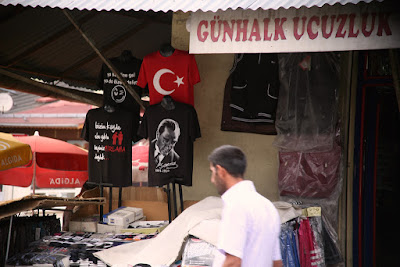 Lime and tapestries are just furnishings to shelter life, in the shop along Bakircilar Caddesi: they help to set you free from economic urgencies, but don’t silence the insistent question pressing every visitor burnt by the fate of Ka.

The protagonist of Orhan Pamuk’s novel, “Snow”, has something that ends up infecting symbiotically, so much so that even those who know nothing of his wanderings in the city, find themselves walking with his amazed and at the same distressed step. The typical step of each inhabitant of Kars, accustomed for centuries to sudden reversals, truculent raids, fatuous coups and abundant centimetres of snow. They can be many, really many when winter seizes the Anatolian highlands and holds them tight in its grip, afraid that Kurdish attacks can isolate the streets longer than his sleep. 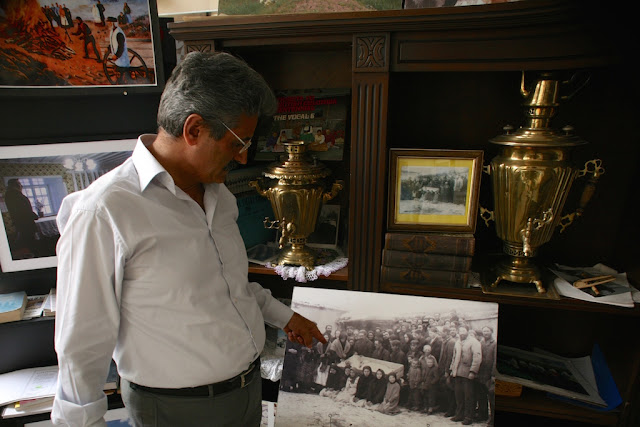 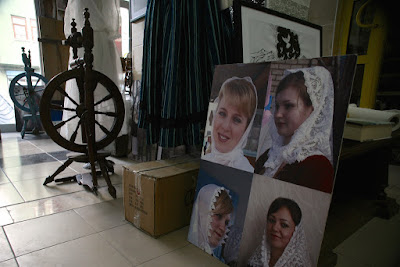 "My grandmother is 84 years old - remembers Vedat, watching a sepia photograph of a woman praying in front of a coffin - and is one of the few Molokans who chose to remain. She did it for love: she married my grandfather, a Muslim, having to give up his faith, as well as links with its community.

She has suffered a lot, because a molokan never lives for himself, but keep tied to his loved ones for life, in the certainty that the only recognized church is the one where there is no authority, nor icons worship, but above all where a few essential commandments prevail: helping others, avoiding money, rather taking the best care of the earth. Absolutely, rejecting any conflict or war. And drinking milk, whenever you like, rather than in the days imposed by the Patriarch only: because milk, as the Bible says, is God’s food, and as "milk drinkers" have finished to be called by anyone who has known them”. 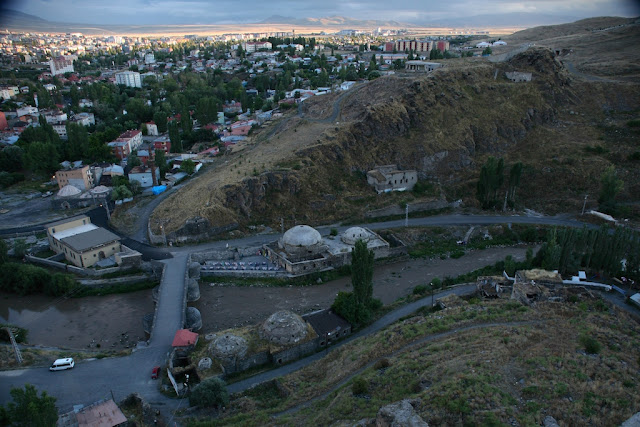 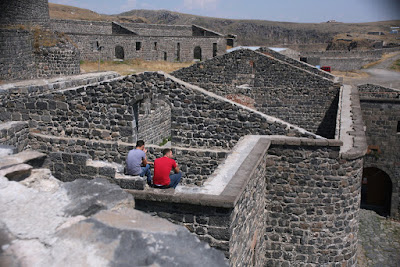 Slowly the back of the store let emerging an unexpected collection of traditional clothes, old photographs, agricultural tools and carved shutters, subtracted to a fate of inevitable decay in now abandoned villages.  They are just a few, but precious testimonies seeking to restore the image of a disappeared Kars, whose mysterious call continues to draw in town restless souls, convinced that the world can still be transformed into an oasis of peace, rather than into an eternally front next to the no-return point.

“Willing to foment no tensions with their brothers who disagreed about orthodoxy - continues Vedat - these simple Christians of Slavic roots, so admired by Russian writer Tolstoy, never put their foot down, preferring to respond to the threats of history by retiring to a land just for themselves. Even at the cost of exhausting kilometres on board of humble wooden wagons: through the vast expanses of Siberia, initially, in the green valleys of Caucasus then. Çakmak, Çalkavur, Incesu, Karakale, Novo Selim. They are just some of the villages around Kars where they were gradually greeted by the Turks, conquered by their simplicity of mind, but also and above all by their extraordinary farming skills”. 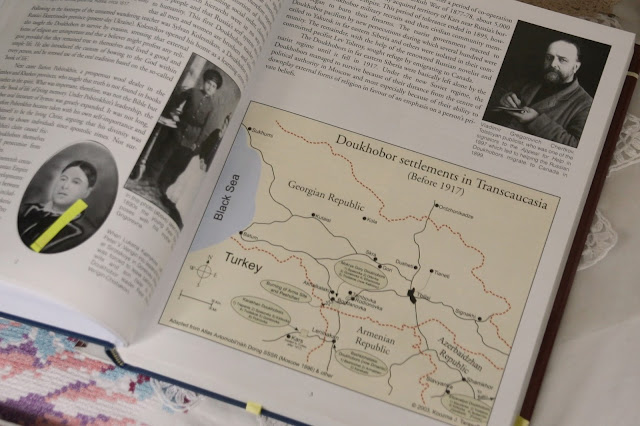 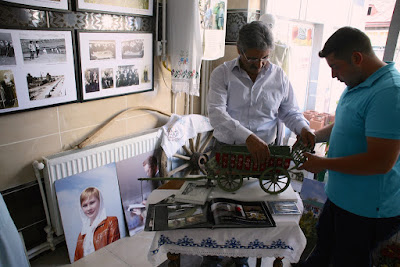 Fingers move faster on accurate maps, where small communities of Anatolia are connected to some States in Canada and in the United States, through one-direction arrows always. Suddenly the miniature of a wagon ruined. Its woods scatter on the floor, without breaking fortunately .

"After conquering Kars to the Ottomans, in 1878 Tsar Alexander II addressed the Molokans to this region: he needed to create a strategic pivot in the Great Game against the British Empire, but people willing to leave their homes lacked. Unless they were threatened of holding arms to defend the Holy Mother Russia. Thanks to the trade along the Silk Road, but also to the fundamental contribution of Molokans, Kars flourished early and took refuge in its stronghold until 1918, when the Bolshevik Revolution turned the inhabitants the idea that they could create a free and independent republic". 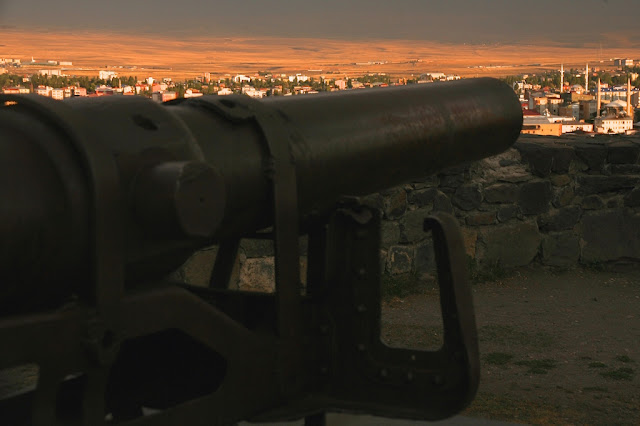 Those were passionate and convulsive years, but once again the weapons represented a watershed for the relatives of Vedat’s grandmother: back quickly under control of Ataturk’s Turkish troops, Kars became hostile to them. The city had to be defended - exactly as they had ordered centuries before the Armenian, Byzantine, Ottoman or Georgians sovereigns - enlarging the walls of the now silent fortress on the acropolis and those who did not conform, would face serious difficulties. 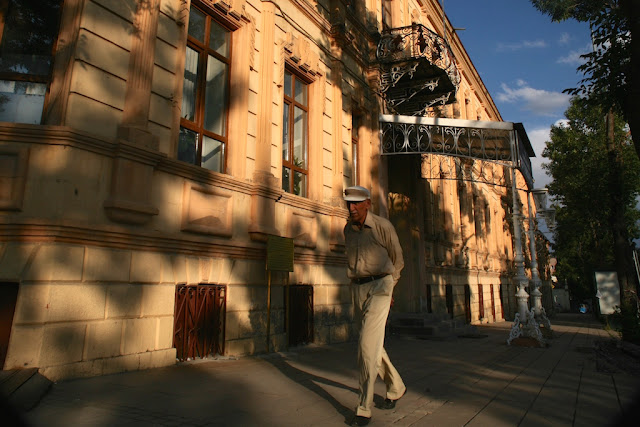 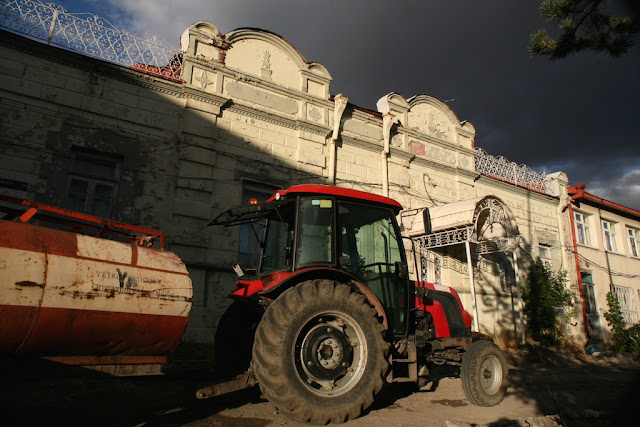 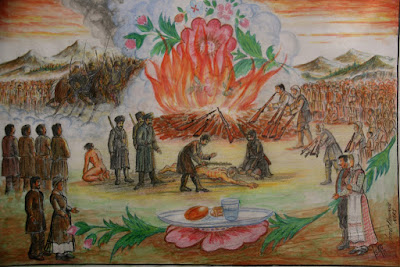 Vedat breaks off and an imperceptible shadow falls on his eye.

"I tried to reconstruct most of their history through these documentaries - says stretching two DVDs produced by his cultural association, the KKSD - but work is much, I'm alone and Kars committed on too many fronts, for people trying to get on top of its complex history. We were won over with an insistence and obstinacy that have few equals: evidently here is something very important, but we have forgotten it”. 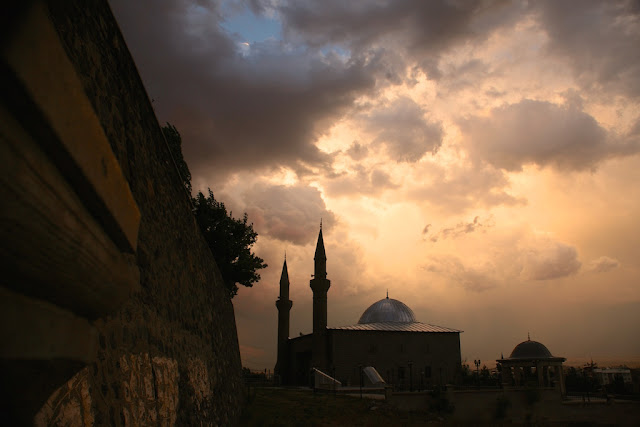 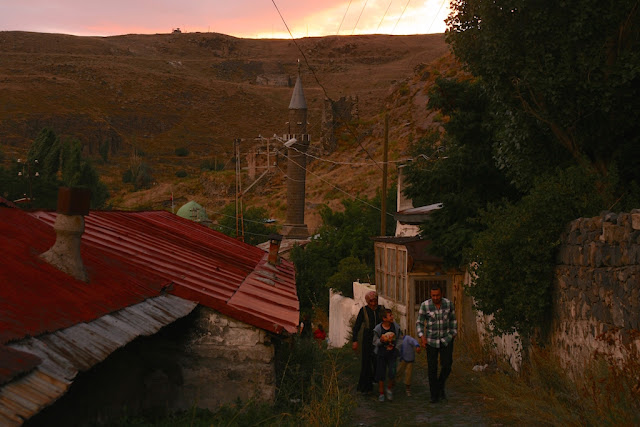 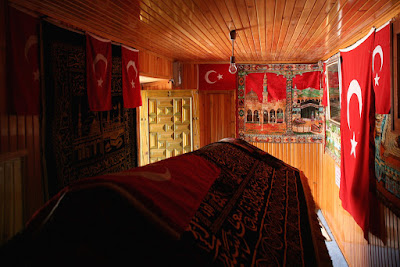 While the sky starts burning and its apocalyptic red wraps the basaltic minarets of Kumbet Camii, the domes of the ancient hamams, as the vaults of the mighty ancient bridge inviting to the tea rooms on the river, someone tries to climb to the fortress before the night pushes the mistral to the city again.

That was just the fateful hour which Georgi Ivanovich Gurdjieff used to talk about, he that grew up just in Kars and attended the choir of St. Arak’elos Cathedral: the ancient Armenian Church of the Twelve Apostles, eternally in restructuring at the foot of the citadel. 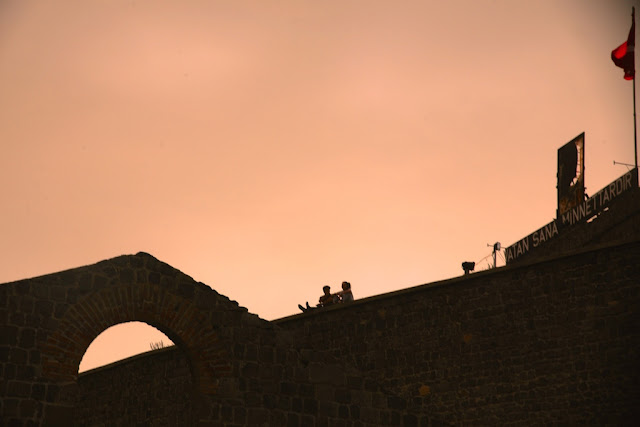 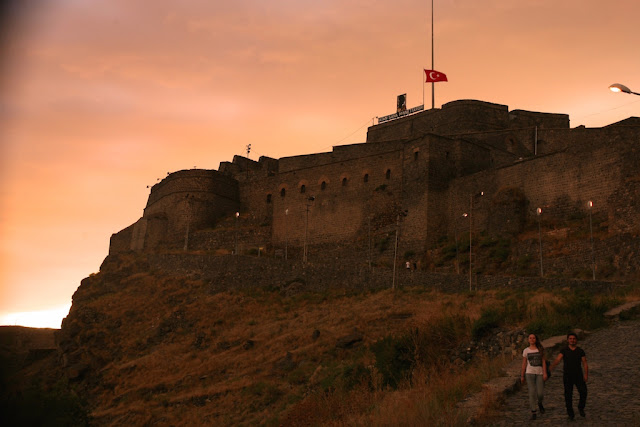 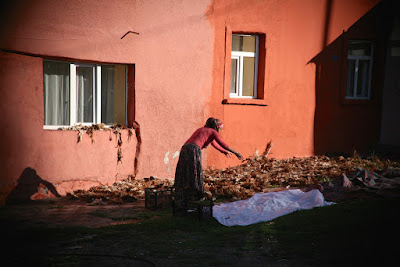 It is possible that, along the way, he sometimes crossed Mrs. Anna Zimmerman, later better known as Bob Dylan’s maternal grandmother, but surely he would not be drawn into the controversy raging today at the crossroads, when you allude to the inauguration of the new railway line Kars-Tbilisi-Baku.

Energy corridor thought to stem Russia's interests in the area, despite every corner of Kars continues to talk about their cumbersome legacy: Baltic style buildings of the tsarist administration or the Gazi Anatolian College don’t look very fresh; just a little bit better is the yellow house of the governor, where they signed the painful Treaty of Kars; but young people have their heads elsewhere. They joke in public parks, not to darken thinking how far both Istanbul and Frankfurt are. Or how close the Caliphate. Or where can the flights from the airport ever lead, as every day young and multilingual policeman Ersin asks himself. 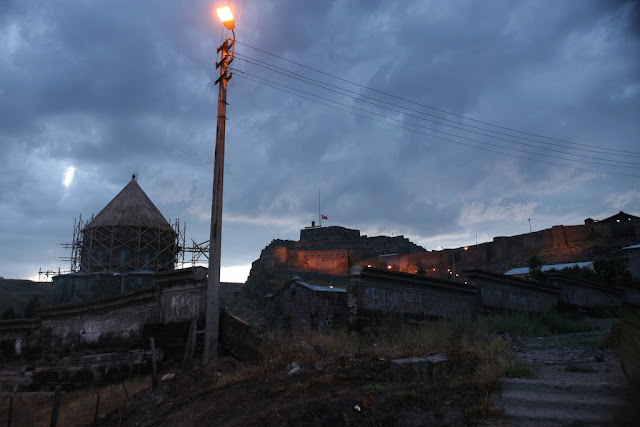 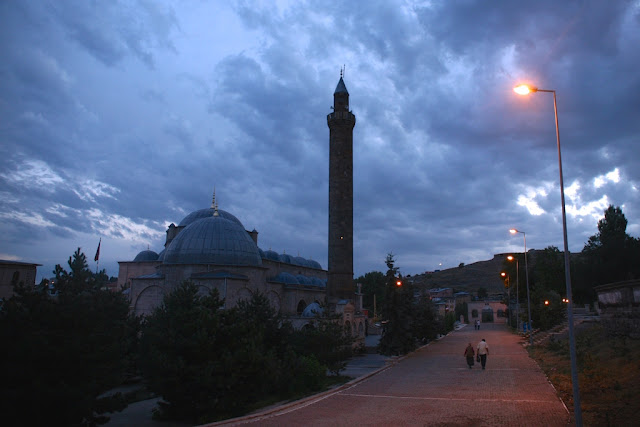 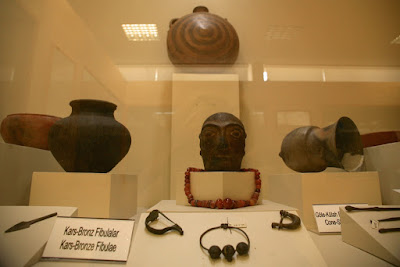 In the pile of books that crowd Vedat’s desk, a red booklet catches the eye immediately. “It’s a survey on Ani’s underground settlements - he notes - and was carried out by four Italian researchers in 2004: Roberto Bixio, Victoria Caloi, Vittorio Castellani and Mauro Traverso.

In my opinion, it remains one of the most fascinating and undervalued document produced on the archaeological site: their mapping and measurement of underground rooms are extraordinary, but stopped too soon. Where they indicate closed halls or not communicating tunnels, there are actually more connections. I discovered other 22 areas of interests, because my cultural association is among the few to have the right to explore the caves zone. But who knows what else lurks down there! UNESCO has not yet sent its specialists, so my photobook of underground Ani will certainly be published first. I would be happy to present it in Italy by the end of this year: without that survey in 2004, it would have been impossible to guess the true ramifications of the site, but certain clues suggested by Gurdjieff and Luigi Villari, in his report "Fire and Sword in the Caucasus", have fortunately kept the way open". 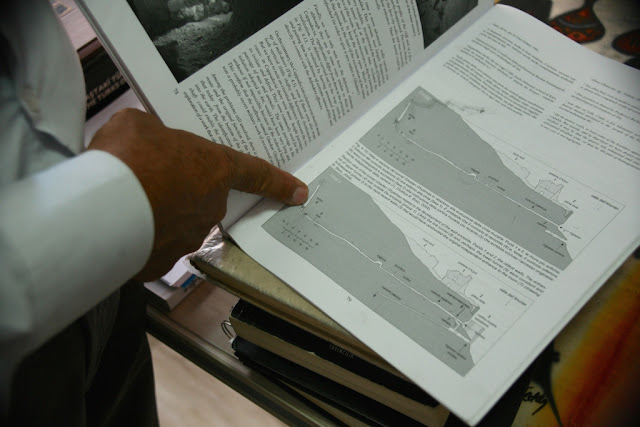 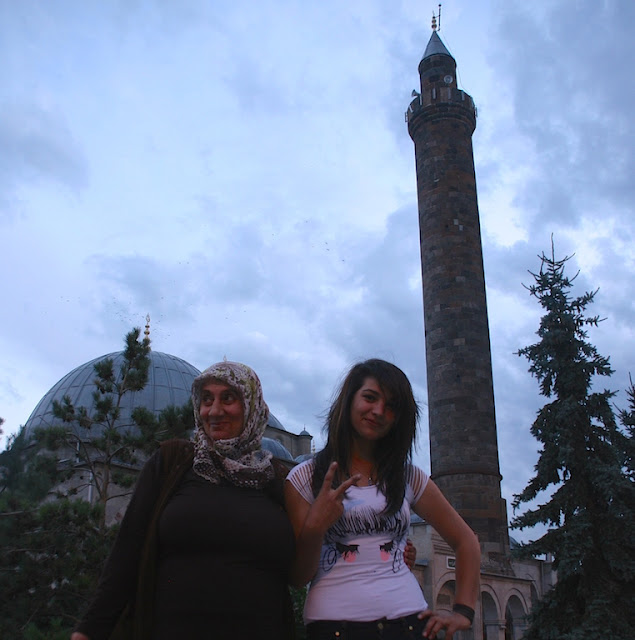 The way. No one dares to speak openly of Sarmoung’s Way; at most they allude to, but certainly in Kars they know more than they say. Ka had been haunted by the look of the beautiful Ipek. Now I’ve understood what made it so alive, deep and illuminating. It’s the same, satisfied look that people of Kars let get away, whenever they taste some bites of their thousand-years old speciality. Cheese and honey. Not all the bees are the same… 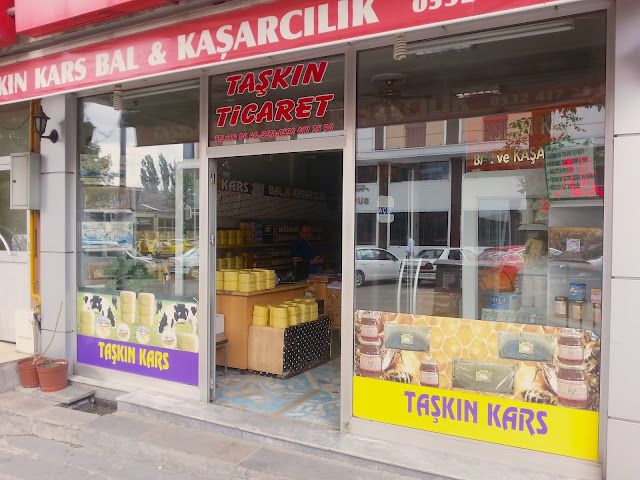 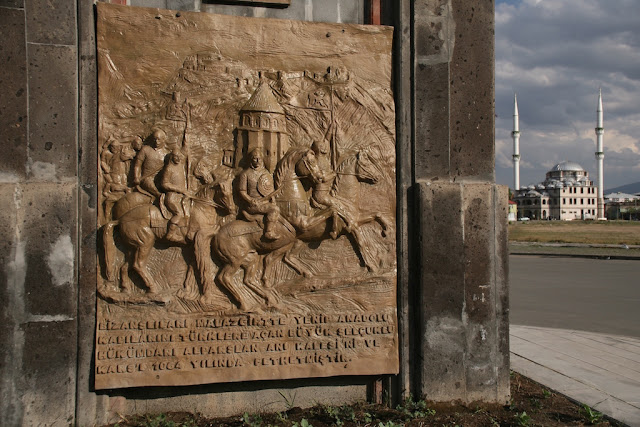 Posted by Altrimenti at 1:21 PM