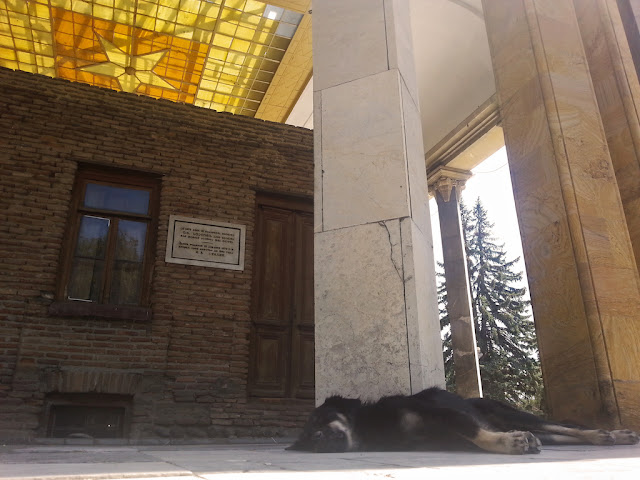 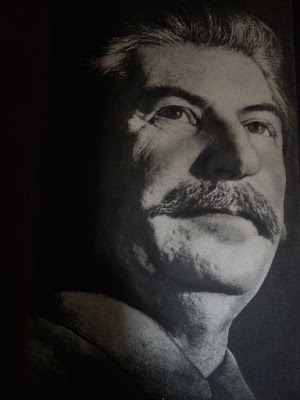 Original Italian text here
Stalin will be laughing up his sleeve. Once again. Wether it is you get to Gori to pay homage to the Little Father of the USSR, or to be indignant about the tyrant through a revealing selfie, the strategy of dissimulation still works very well in his hometown. All the attention is for him, for his first house protected under an imposing Soviet colonnade, for the city square now bereft of Generalissimo’s statue, for the street stubbornly claiming his name, but especially for the smart museum passing on to posterity half-truths.

Despite the brave efforts of contemporary historiography, since 1991 committed to give a realistic picture of the man who has marked the destiny of an entire century, it is much easier to refer to the usual and worn dichotomous patterns of the Cold War. All the more so today, regurgitating period of spurious American obsessions against the spectre of the Third Rome, who has punctually become flesh in Aleksievic Svetlana: "I love Russia, but not that of Stalin and Putin”. Voilà. In the lapidary statement of the new winner of the Nobel Prize for Literature 2015, the axis of all evil has returned to unfold, showing its vivid concern for the tragedies of today: world hunger, crisis of the global market, fight against terrorism. 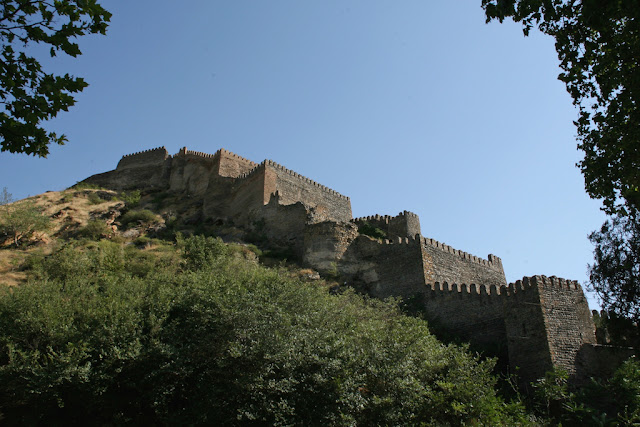 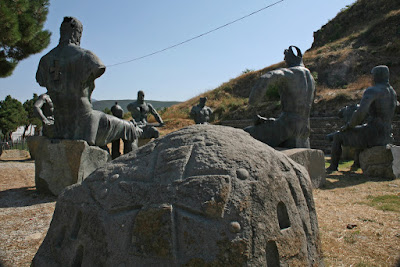 Under the fortress that gives the city its name -"Gori" means precisely hill in Georgian - the eight guardians of Sarmoung’s secret do not get perturbed. Seated in a circle, protected by medieval armours, let rumours run from local to local, according to which they would be nothing else than the reviving image of brave brothers killed under Luftwaffe’s bombing.

Others counter they are the fallen ones of the blitzkrieg against Russia in 2008. Missing forearms, faceless headgear, rips in the armour, they all strengthen the theory of their bloody end actually, although a "ninth" boulder dropped beside the stones on which they sit, so as their circular arrangement, can instil a suspicion at least. 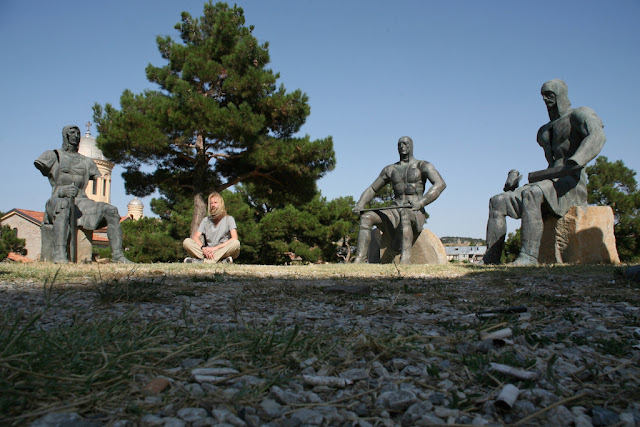 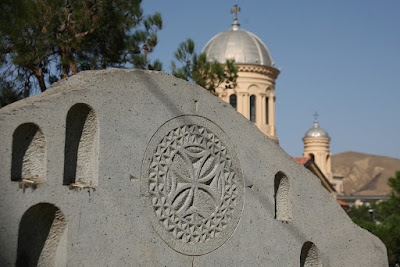 "It seems they are there waiting for someone" - highlights an old and hollow-eyed woman in a bizarre German, dressed completely in black, despite the merciless sun. "They wait for a long, long time" - insists, throwing a furtive glance before walking away. "Or maybe not even by so much”. Impossible extracting other words. With a slow, but resolute step, she disappears behind the door of Virgin Mary’s Cathedral, just in front of the guardians. What is certain is that the number nine, since ancient Greece time (where it was referred to as “Ennea"), has always had a unique and regarded status: depicted as a star through the intersection of three equilateral triangles, it alluded to Terpsichore, muse of the sacred dance, the ninth and the most powerful of Zeus and Mnemosyne’s daughters. Curiously, Virgin Mary’s Cathedral, whose laminated dome makes Gori’s light even more blinding, was used as a school of music and dance in Soviet times, having to interrupt its Catholic charges in force since 1810. So much for the believers, the ancient rites have been restored anyway: today the icon of the Mother of God is shifted to the twin monasteries again, the most important of which is that of St. George in Alaverdi, in the eastern region of Kakheti, aka the Georgian heart of the most ancient region of wine production. 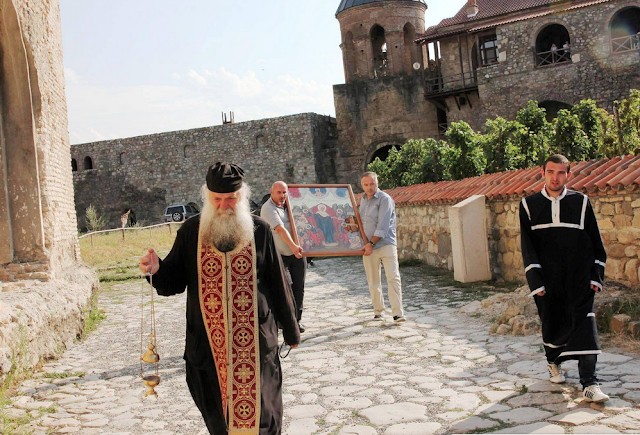 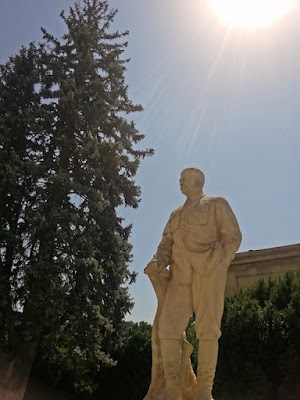 The Alaverdi Monastery Cellar, produced by the descendants of the 13th Assyrian monk who came from Mesopotamia and gave his name to the complex built in the sixth century on the site of an ancient centre of Moon’s worship, is not a case considered among the best wines in the world. Its nobility is proven by the use during the celebration of holy Alaverdoba, inspired by the autumn cycle of the crop. At the same time symbol of the Moon and Hecate, linked to the descent of energy into matter, as well as representing the full cycle of transmutation, nine means “judgment in the instant of death” for numerologists. Tied then, by an astrological point of view, to the planet Mars, lord of force and war, the nine denotes passion, impulsiveness and iron will, however, guided by a deep sense of integrity and wisdom. Who is embodied in the number nine is then intended to guide and inspire with his example, as deep and charismatic person, but from which we always expect higher skills than average. No coincidence that the nine corresponds in Kabbalah to the letter Tet, which means "ruler's rod"; the test to which it subjects is to learn to manage that part of your personality aiming to power and control, so much so that the nine is considered the "number of truths” ultimately. Nuances that Georgi Ivanovich Gurdjieff, spiritual teacher and seminary mate of the young Stalin, knew very well, having established the Enneagram at the base of his teaching. Indeed, according to the comments of his main biographer Piotr Demjanovic Uspensky, "The Enneagram is used as a mathematical model for the way of phenomena developing, consequently as a model of the nine archetypal human personalities, always interconnected with each other". 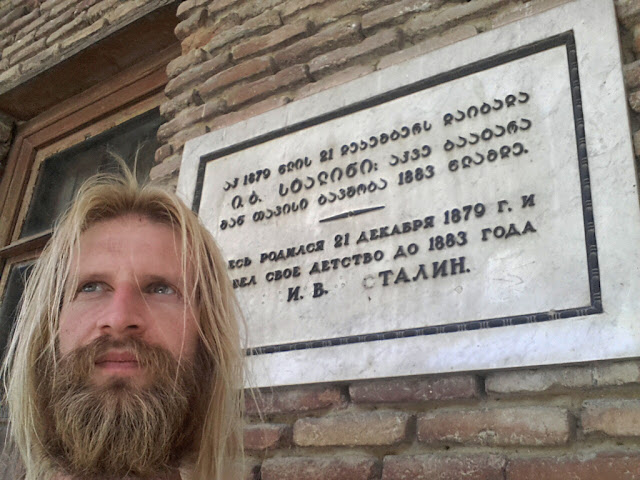 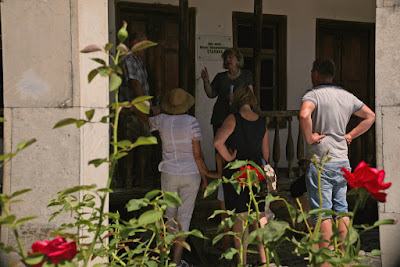 Inevitable a shiver in front of the epigraph showing the home of a poor shoemaker’s family, within which the little Josif Djugasvili Vissarionovich raised the first cry. Something doesn’t work. "The latest studies - says Natalia, a sinewy and unusual Georgian blond-haired volunteer, but very expert on every detail about Stalin - attest to his birth on December the 18th, 1878 (December the 6th according to the old Russian calendar), although the figures up here on marble tell December the 21st, 1879 (December the 9th according to the old Russian calendar). Really strange, as this last date was personally sanctioned in his biography”. Hypotheses abound. Natalia sweats, goes from purple to white, but can not bring herself to support an explanation, rather than another. Absurd that the Georgian Helmsman wanted to avoid a year for vanity, but even more disturbing is the mystery surrounding the day he died: March the 5th, 1953, just next to the ritual fasting of the Jewish Purim, but also to the Roman Ides, which - in addition to sanctioning the assassination of Caesar, the "Tsar" of Rome - marked the beginning of a new lunar year. 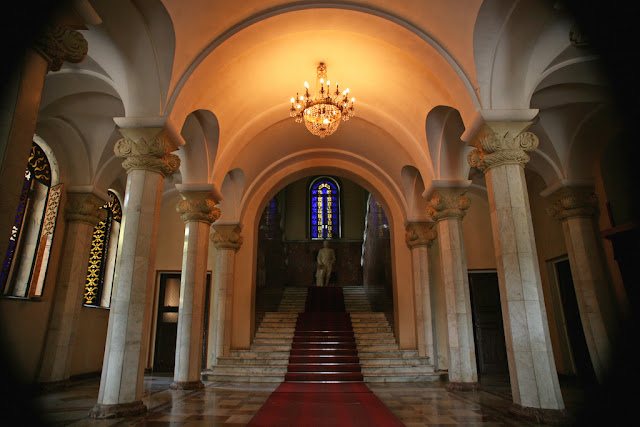 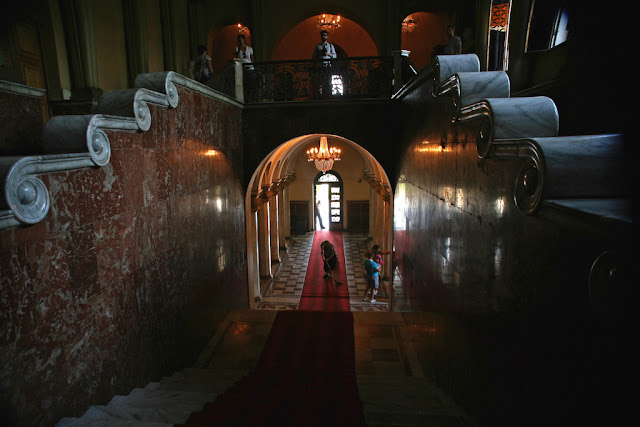 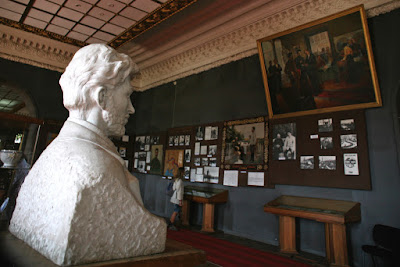 The museum in Stalinis gamziri 32nd is not stingy with biographical evidences on Gori’s son, but it is as if could not penetrate a curtain cleverly spread around its roots: there are family photos, letters and poems written in his own hand, but even impressive school reports specimens, gifts of statesmen and inevitable pipes; even a death mask kept in the gloom of a circular room and similar to the inner sanctum of a pagan temple, and of course a grandiloquent celebratory space for the heroic victory in the Great Patriotic War. 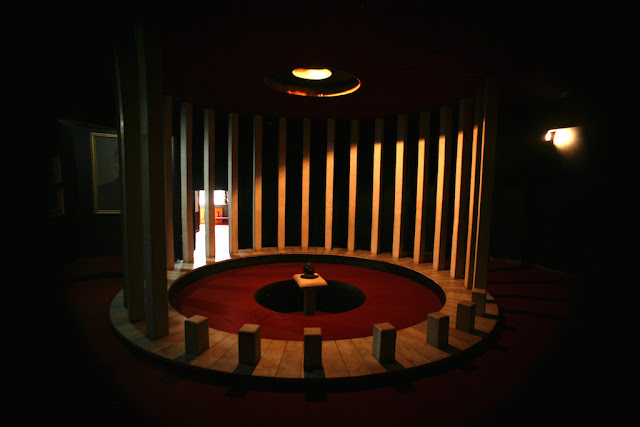 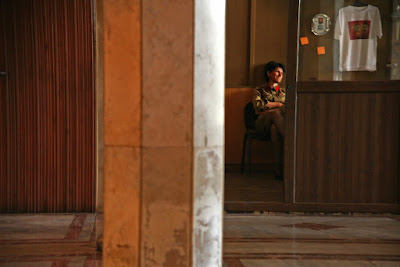 Someone is intrigued by the rice grain on which the Indian Prime Minister wrote a dedication to the Soviet leader; someone else meticulously scrutinises the maps tracing its numerous escapes from Tsarist prison camps in Siberia. Children enjoy jumping on the bulletproof wagon that carried Stalin to Yalta, when he divided the world with Churchill and Roosevelt. Still others contemplate the images of the last century Batumi, bridgehead of the Rothschild oil refinery where the young Marxist worked between 1902 and 1907, finally taking consciousness - by his own admission - he has become "a skilled worker for revolution”. In the struggle which pitted workers and oil companies along the railway Baku-Tbilisi-Batumi, area of the first general strike in Russia, the Bolshevik radicalism ended indeed to distance itself from the other opposition forces, willing to come to terms with masters of the oil industry in order to snatch the first labor contract in their history. 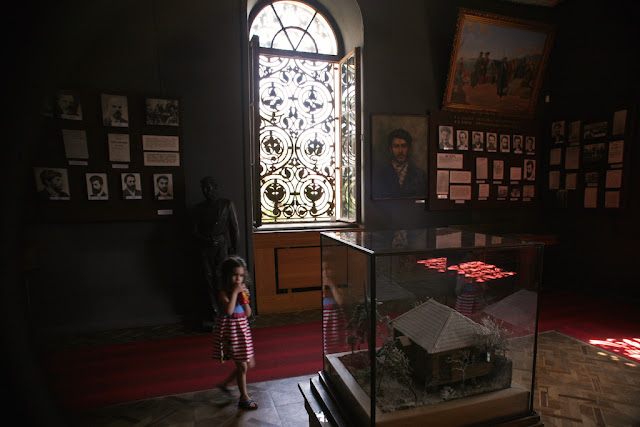 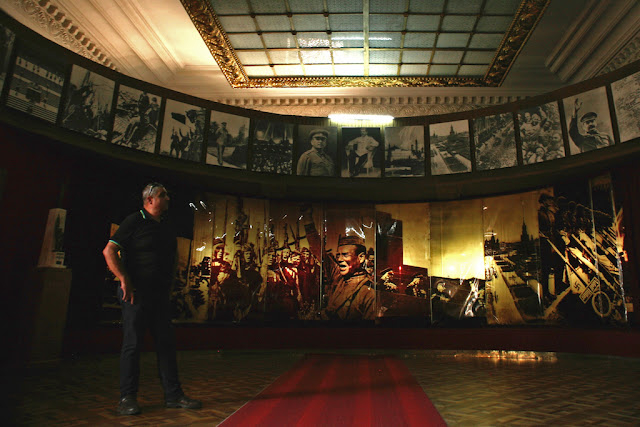 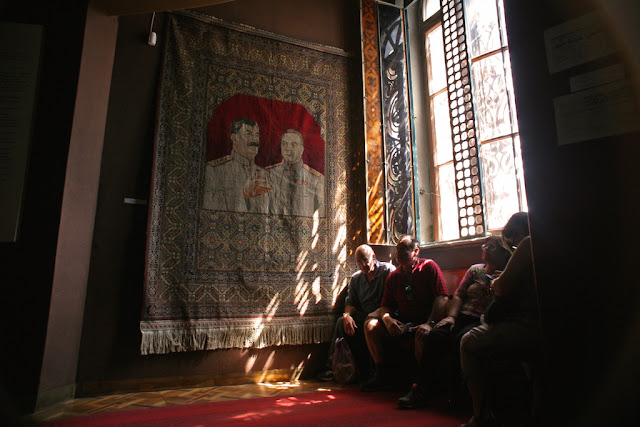 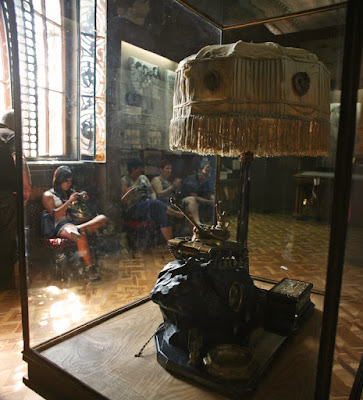 Hall after hall, you may focus on the determined character, his strategic vision or almost messianic vocation, but more light spreads in the middle, more shadows spread out the edges. The museum in Gori, unlike the one has disappeared in Batumi, undoubtedly speaks of a less known and in any case surprising Stalin, but it still reflects the image that the Georgian cunning fox wanted to leave. For better or worse. Without violating the shadow, it is actually impossible to get on top of its historical uniqueness and why, after more than 60 years after his death, his myth challenges even the steel. There is a reason why Sarmoung guardians are at the base of Gori’s hill. Who has the patience to climb up to the top, till the ruins of the arches and square towers, unlikely he will realise for themselves. But he has not to look at the underlying statue of King Vakhtang Gorgasali, much less look for to cross of Gori along the horizon, where, even today, a sheep forced to turn three times around the church by the sulfur springs is sacrifices to St. George. No, the light always comes from the East and from the East, today, it is time to cast out nines. 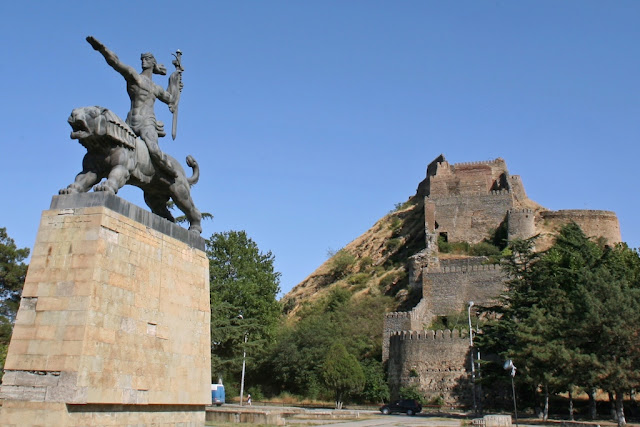 Posted by Altrimenti at 5:50 PM