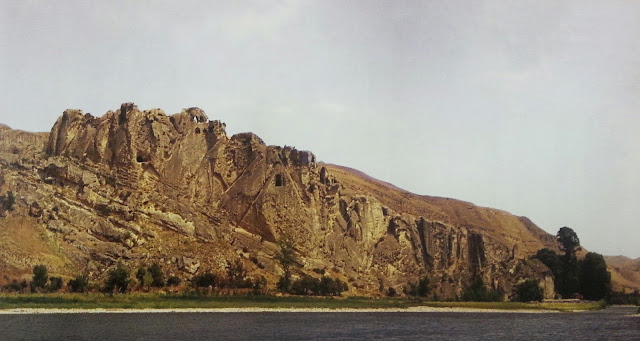 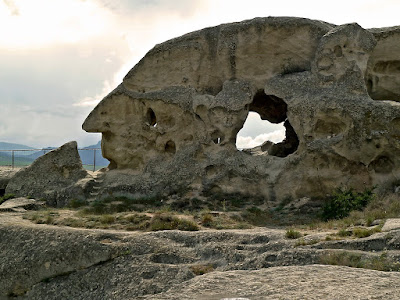 Original Italian text here
Seen from a distance, beyond the river Mtkvari, it seems nothing more than an ophiolitic shock in the middle of an arid and barren landscape. Old houses at its feet, so patiently sketched in Duboi de Montpereux’s charcoals around 1833, were wiped out by a devastating earthquake at the beginning of the last century, allowing the archaeological site of Uplistsikhe to conceal its true identity even better. But the original inhabitants, perhaps settled before the third millennium BC, knew well that you must keep your eyes fixed on a specific point, in order that you can then catch those details invisible to profane eye only. So it is today: along the faults of rock, without hurrying to find out, small holes dug by human hands let themselves suddenly get, exactly like striking straight lines culminating in the vertices of isosceles triangles, while on top of the relief it is even the profile of a face to take shape gradually. Like a giant, swallowed by the earth, trying to appeal to the Sun in a last, desperate leap. 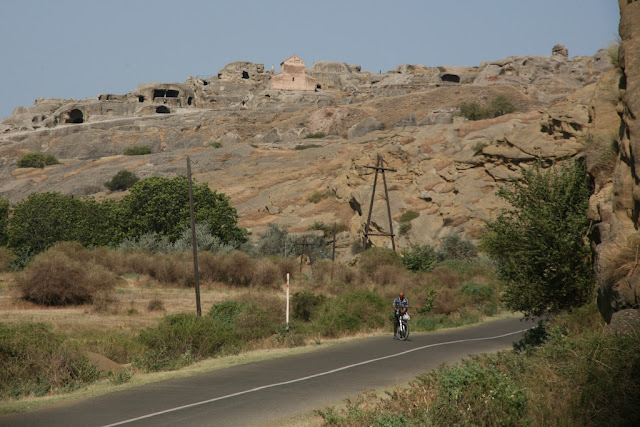 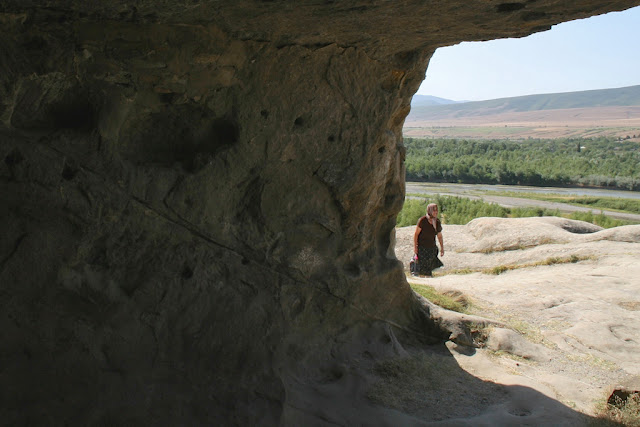 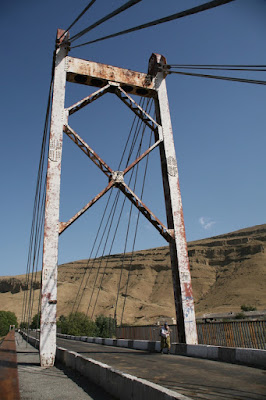 “The works for the archaeological enhancement of Uplistsikhe started late - complains Goga, the earliest of the marshrutka drivers busy to disentangle among the vines that drive outside Gori - so much so that UNESCO has recognised it as Heritage of Humanity in 2007 only. Stalin himself, despite being born here, some fifty kilometres away, had been able to access the site by climbing  with difficulty along slippery paths and pushing himself in caves still littered with debris. On the other hand, he must have sensed very well what was the meaning and original function of the "Fortress of the Lord", because his following cult bears the marks of that in any event”.

Overstepped a rusty bridge on the Mtkvari, along which a leathery old woman is waging a challenge of balance with the bundle of wood on her shoulders, the hidden side of Uplistsikhe begins to confide memories of its turbulent past in. Next to giant’s head it suddenly emerges an ocher church blending with numerous openings in the rock just like a Lego brick, carelessly dropped on a mass of modeling clay. It is all what remains of Christian medieval architecture innervated haughtily in the millennial ruins of an ancient pagan site, whose underground cults survived till the killing blow of the Mongol invasions, between the thirteenth and fifteenth centuries. Or at least, so the official annals tell. 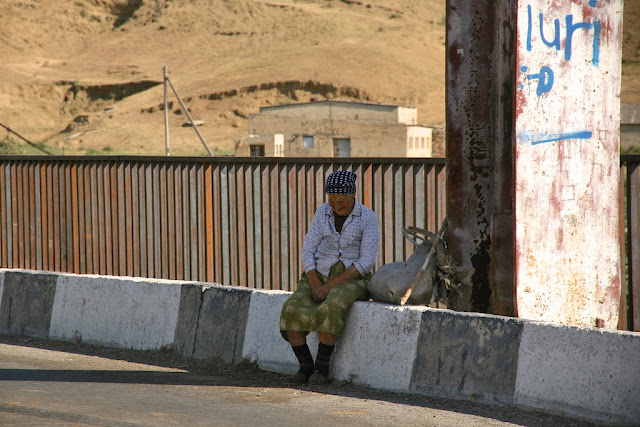 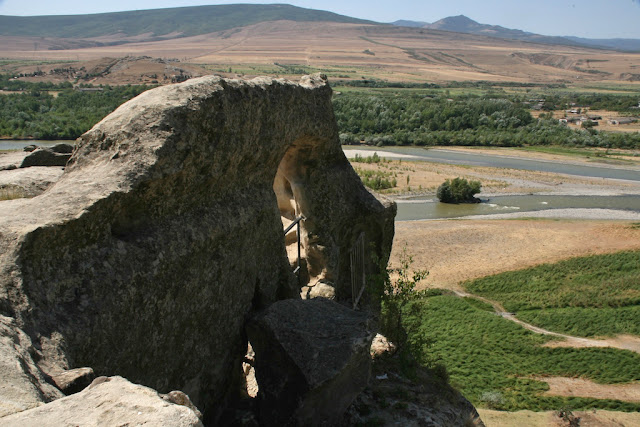 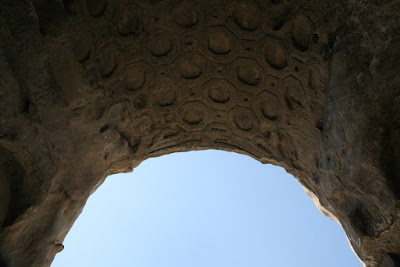 Being in the middle of the main road that put in touch the heart of Central Asia with the Mediterranean world, Transcaucasia, Uplistsikhe has always enjoyed wealth and splendour, and was widely considered the most sacred temple of the ancient kingdom of Iberia, as well as a stubborn stronghold on the victorious path of Alexander the Great to the Persian court.

Structured on three levels of access, the complex is crossed by tunnels and secret passages that would still allow it to withstand long sieges, also providing a strategic observation point on the entire region at the center of Georgia. But the eyes of its inhabitants were accustomed to scrutinise the sky more often, rather than the pettiness of everyday life. 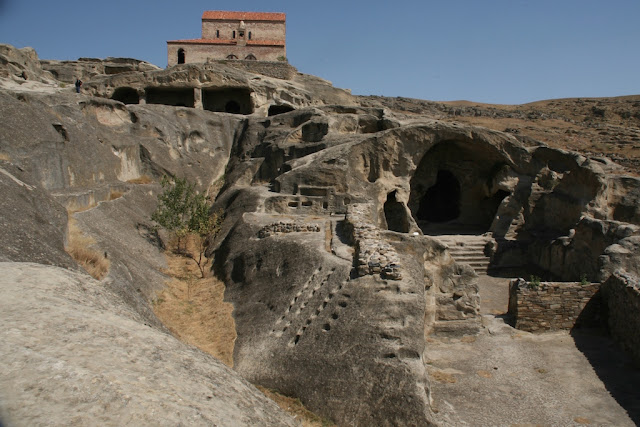 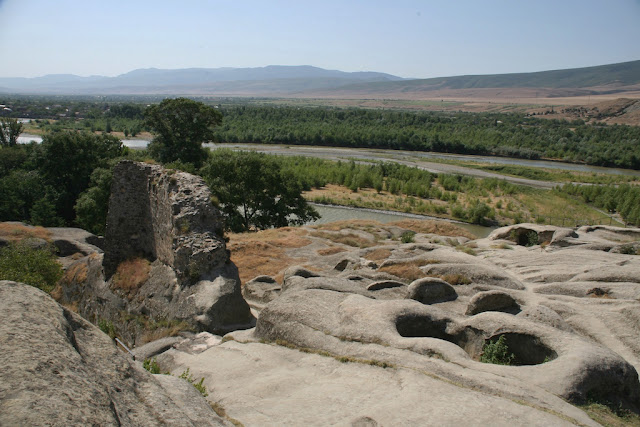 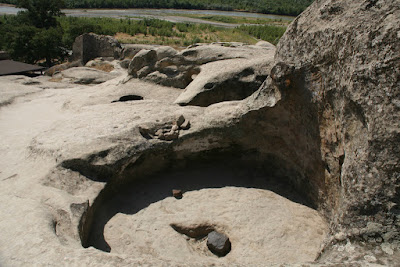 “There are many, too many points of wine or grain collection to topple the reconstructions of the archaeologists - the custodian of the museum at the foot of the fortress confides to - because we have two possible explanations only: either the city's inhabitants spent their existence in squeezing bunches in the artificial quarries of the rock, or those same pits, perfectly circular or rectangular and scattered in the greatest exposure to light areas, had a completely different function from that ascribed to them. The huge disc in front of the room of Queen Tamar, almost one and a half meters in diameter, evokes certain astrological alignments, rather than agricultural habits. Similarly, the massive fortification towers, like the refined geometric decorations carved under the roofs of the ancient ritual spaces, should not fool you: many were the people and the influences that have redesigned these spaces, but the insistence they returned to Uplistsikhe to, had to be moved by deeper reasons". Considerations that sounds more than ever close to those of the Turkish inhabitants of Ani and Kars. 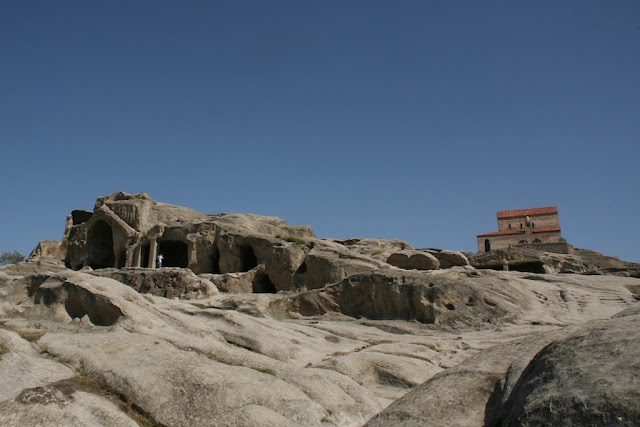 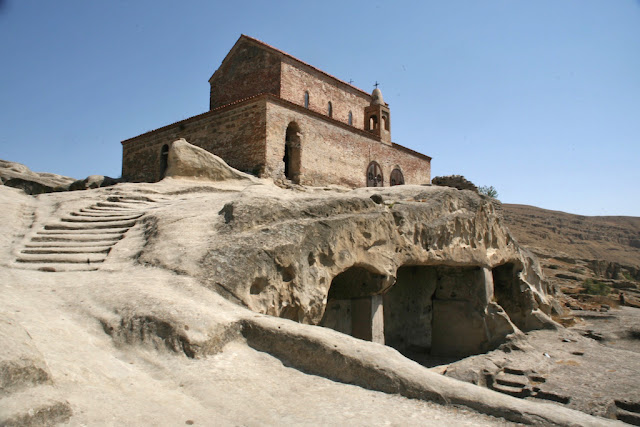 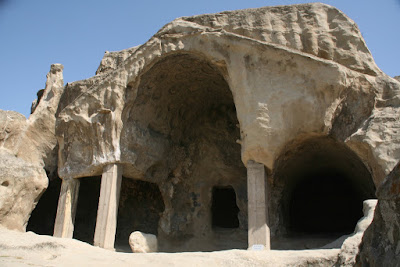 If Christians were not so scrupulous in erasing the architectural design of the original temple complex, today we could at least argue something more, and safer, about its astronomical orientation. In what direction the geometrical axes, that cross it, converge exactly? Towards what, or perhaps whom, does Uplistsikhe point? A puzzle for archaeologists. A dense mystery for its inhabitants. But not all is lost: there is always a saint to appeal in difficulty. And in Georgia, the saint has always just a name: Saint George, the heroic slayer of the dragon. The red trail of his blood runs between the lines of an illuminating study developed by Gocha Tsetskhaladze, researcher at Balliol College, Oxford. But, as it often happens, the better to see what's under your nose, you should have a few steps back. 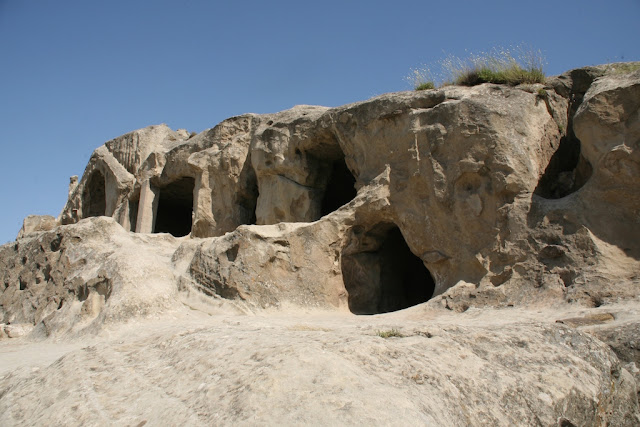 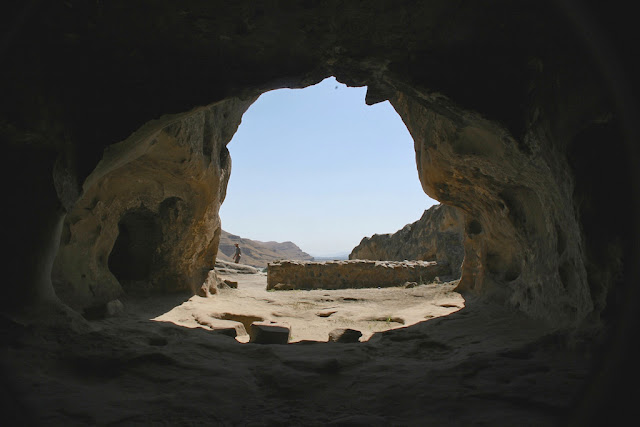 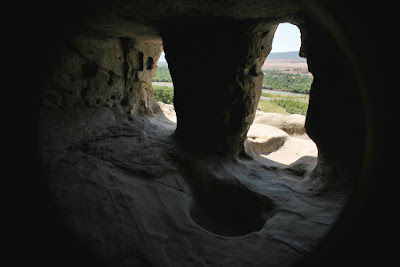 "It has previously only been possible to assume that the cult of Mithras was popular and widespread in the ancient Georgia with reference to materials from the ancient region of Iberia, dating from the early centuries A.D. (depictions of horses on silver drinking cups from Bori, Armazi and Zguderi).

Interesting information has also been preserved in folklore and in the pagan calendar of ancient Georgia, in which there was a month marked by celebrations in honour of Mithra, namely February. In the course of these celebrations, people would turn to Mithra, revered as the benevolent god of Light and Prosperity, and sacrifice a pig (in Avesta, the pig was regarded as the sacred animal to Mithras)”. 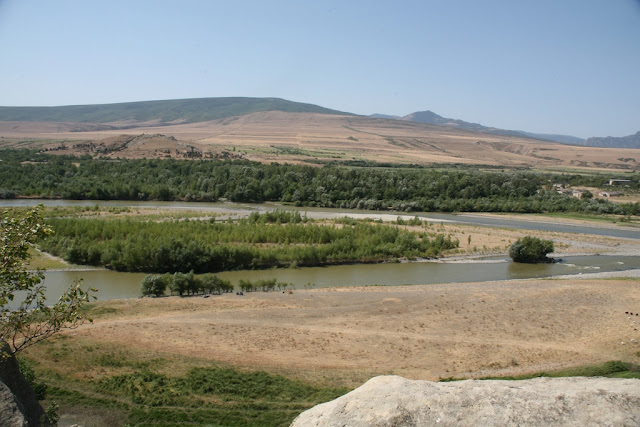 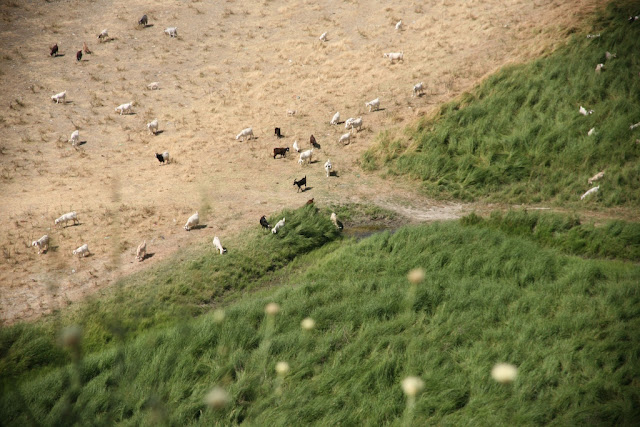 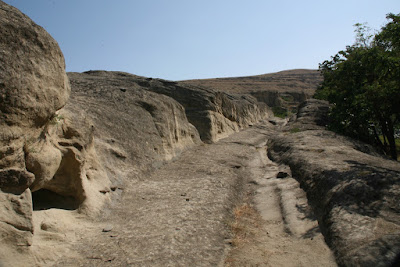 It is an impressive track, but not easy to go through, turning pigs into bulls, as well as bulls into dragons, protean animals that curiously lead always back the same meaning astral. The cults of the pirates of ancient Cilicia, dedicated to Perseus, would be one of the main channels of processing and transmittal of original Mithraism.

As also Stelio Venceslai confirmed, in his essay "Mithra, the god of light" what we know today of Mithraism is very little when compared with his thousand-year old life: just over 600 brief inscriptions, mostly dedicatory, about 300 others, often fragmentary, almost identical and often reduced to a heap of ruins monuments, a few casual references in Christian patristic. 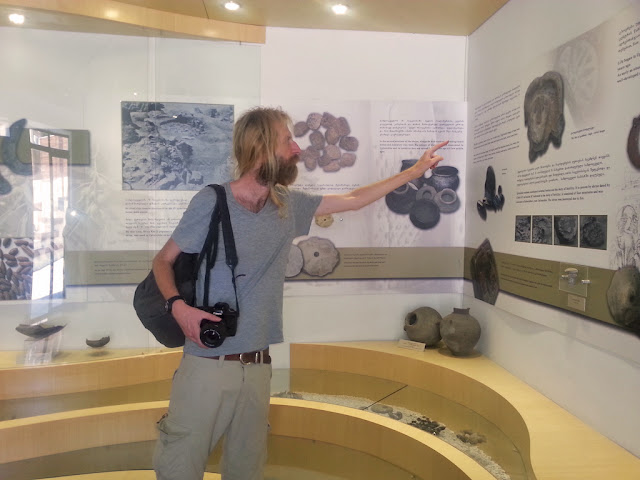 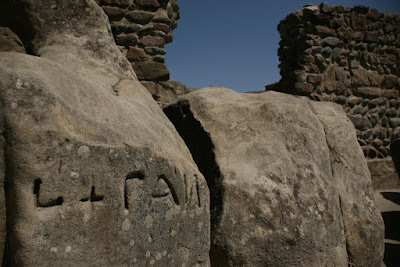 "The oldest one - Venceslai confirms - is offered by a clay tablet showing a treatise of the fourteenth century BC, among the Hurrian king of Mitanni, Mutawaza, and the Hittite king Suppiluliuma, in the south-west Lake Van, on the border between Turkey and Armenia”. Beyond its ancient origin, the darkness that envelops the god of Light depends partly due to the secrecy of its initiation rituals, as well as its too similar traits to those of the Christian God, manifested in an alarming trinity since the beginning. Mithra, child and pastoral god emerged in the exact moment when a ray of light stroke a rock - catapulting him into the world with a Phrygian cap as well as a dagger in his hand - is invariably depicted in company of two torchbearers: Cautes, with a torch pointing down, and Cautopates, in turn with a torch facing upward. Together, the trio represents the sun dawn, midday and sunset, but also the cycle of the seasons that is renewed in the movement of the vernal equinox, from the constellation of Taurus to that of Aries. 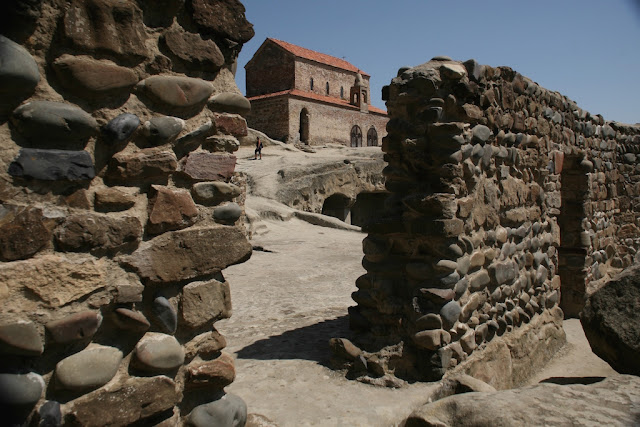 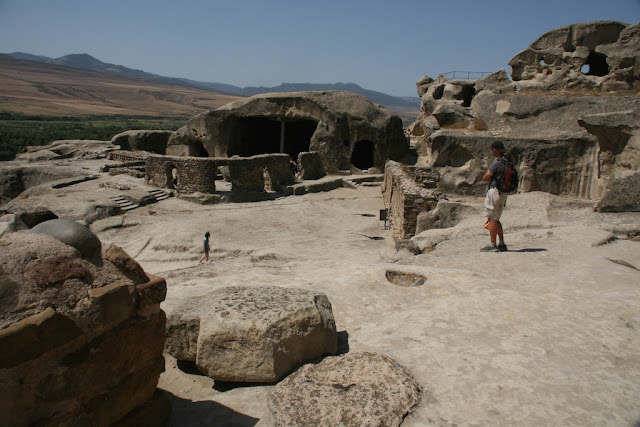 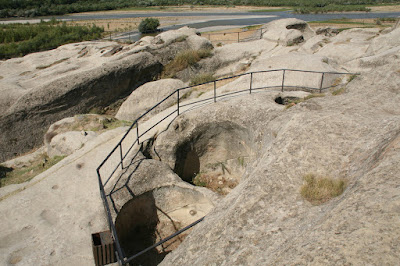 There is also a parallel version of the myth, which wants God adorned with arrows, thanks to which he would be able to pour the water of origins, as evidenced by a large Seleucid temple in western Iran, dedicated to the goddess of water Anahita: immaculate virgin mother of Mithras and miraculously impregnated by the god Ahriman. "Somehow - the guardian of the museum insists - Mithras is the mythological matrix for a more ancient cosmic cult bounding the Sun to the Moon, still distinguishable in the iconography of King Mithridates; its tremendous adaptability to the beliefs of different peoples and, even worse, the direct threat as unique and transcendent God to Christianity’s achievement, however, have come to confuse and alter its primordial roots. All solar images of Christianity, from the presence of radiating halos to the sun draw that graces the monstrance, gradually climbing up to superimpose Christ’s birth to the day when they celebrated the Sol Invictus, the winter solstice, contributed to engulf all traces of this feared competitor god”. 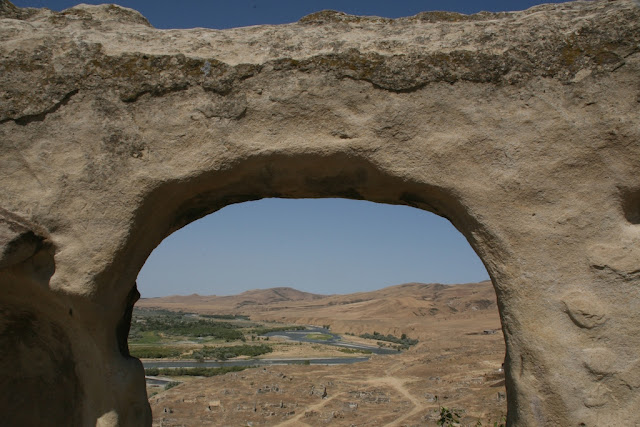 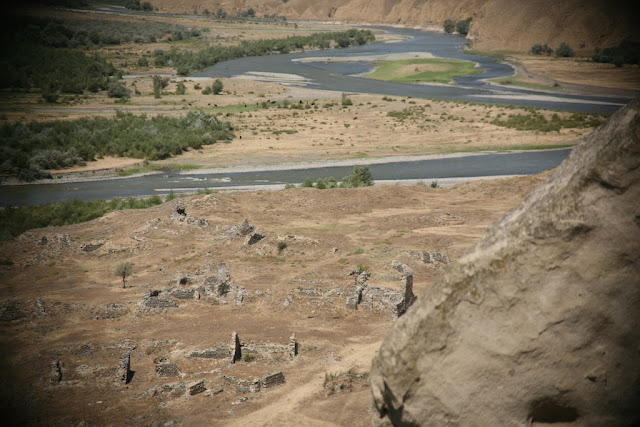 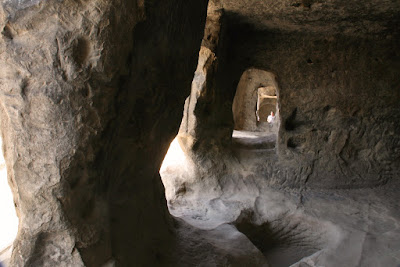 They fortunately remain Uplistsikhe’s unequivocal wombs, skilfully carved and oriented to intercept precise solar movements, to grasp the changes of the precession of the equinoxes, to keep alive that ancient astrological tradition which, since the days of ancient Babylon, continues to raise disturbing questions on the actual antiquity of man and his knowledge of heavenly “messages".

Simpleton the one who thinks it is about mere cult overwrites: behind the shift of Stalin's birth date, still testified by the epigraph posted on his house in the center of Gori, it is actually traceable a shrewd operation that goes well beyond the deification of his cult. Stalin was aware that fate had placed him in privileged - but not perfect - conditions to fulfil a task which human history called for thousands of years. Without Gurdjieff’s - his special schoolmate - indications, however, would have been impossible to go as well, as indeed he did then. Both, however, and by different ways, were brought to force their hand. And, even worse, they did not trust each other fully. Some friendships lives unconsciously tightrope. In the worship of the sun, and through its most important temples, were preserved precious coordinates for moving towards a precise centre, although at the time they rumoured that only a book could guarantee the accuracy of the route. Could reveal a locus absconditus, yet evident, depositary of a so dangerous secret to lose even the reason of the bests. 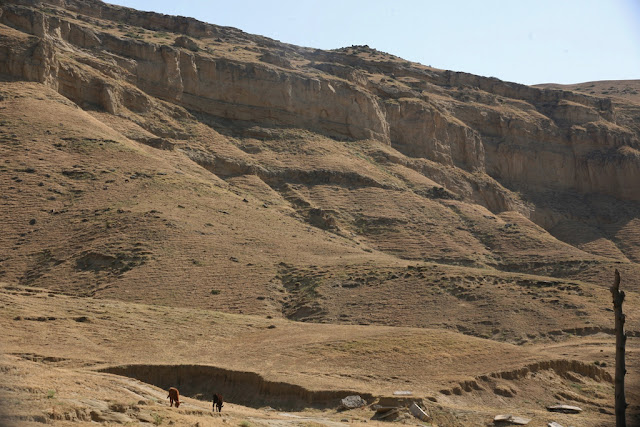