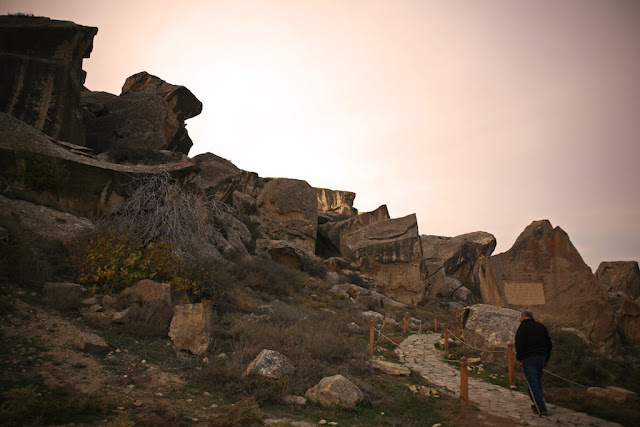 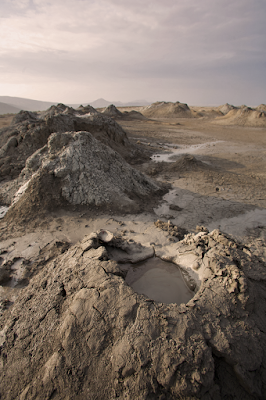 Original Italian text here
Stones speak in Gobustan. Sometimes they sing also, trying to tune their voice to the gabble of nearly 400 mud volcanoes surrounding the most important reserves of petroglyphs in Azerbaijan. The problem, however, is to understand what the hell are saying over the past 15 thousand years.

Archaeologists, explorers, even musicians have given a try, but everyone has been able to understand one part only of their so complicated history, just because their stories force us to consider times and places that seem to have little in common.

"It is said that once the Sakain, i.e. the angels, and the images of the gods, have cried over Janbusad, as well as all Sakain had wept on Tammuz”.

Here we go, again. Azad is an inexhaustible wealth. Exactly like the oil and gas fields that stud 64 very arid kilometres between Baku and the archaeological site, tirelessly hailed from the arms of blue drilling machines. He takes a step and stops. Points graffiti and begins to rummage through the memories of the entire Fertile Crescent. Massive neck, obsidian-eyed, he is not the usual guide repeating the lesson at 33 rpm. Gobustan, for him, is rather a crossroads, the place where the knowledge of a millennial tradition that knows no differences of race or creed converges, even admitting to have in front one the oldest puzzle of humanity. To follow him in his digressions, however, implies having in mind a geographical map whose cardinal points extend from Armenia to Khuzestan at least. 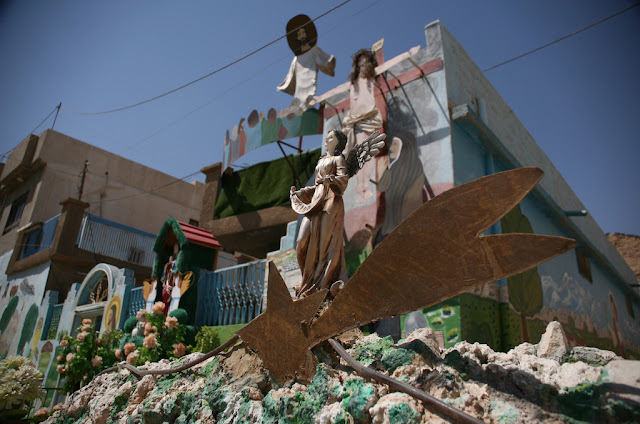 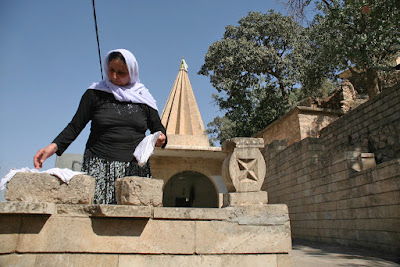 Read more »
Posted by Altrimenti at 4:09 PM No comments:


Finding the abode of angels is much easier than looking for the Land of Sarmoung. No need to engage lethal tests such as climbing the Armenian volcano Azhdahak, or getting lost in old tomes full of allusions.

Just rent a car in Duhok, busy Iraqi town a few kilometres from the Turkish border, and make a beeline to the leafy hills of Lalish.

After one hour of rough plains, populated by the last descendants of the Assyrian shepherds, and eternal flames signaling remote refineries, anyone will be able to indicate where Melek Taus rests, the demiurge araised by God’s emanation.
Read more »
Posted by Altrimenti at 4:26 PM 1 comment: